Are you ready for something completely different here at Meet The World? It's my very first Magic Mountain post, and it's all about my very first Magic Mountain trip! The year was 1978 and I had just graduated from eighth grade (and had recently gone on the school's Eighth Grade Graduation Trip To Disneyland.) Up to that point, I had been taken on many family trips to Disneyland, Knott's Berry Farm, Marineland, Universal Studios, Japanese Deer Park, and Busch Gardens (Van Nuys), but for some reason (probably distance), we had never gone to Magic Mountain. Well, as an eighth grade graduation present, my mom decided to take me to Magic Mountain.....probably because I had been asking her.....A LOT! 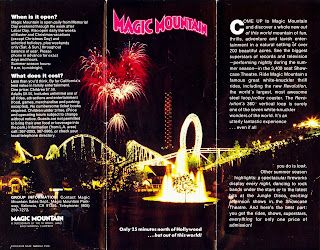 My mom even took this pamphlet and wrapped it up as one of my graduation gifts. I was very excited. I had been wanting to go for a long time, but even more so now because this was the summer that Colossus was opening. The model for Colossus was pictured in the pamphlet along with a description of the "greatest rollercoaster in the world." 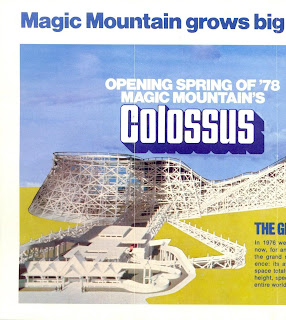 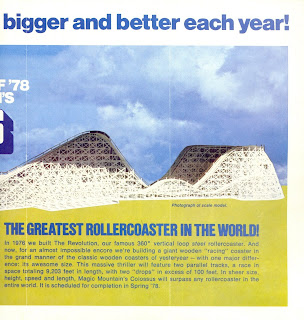 Here are some other pics from the pamphlet. 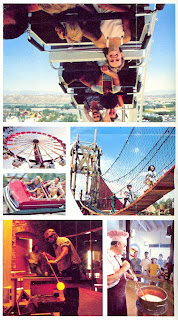 I'm flipping this one pic around to show what's happening to the two kids in this photo. This exact same thing happened to me the first time I rode Revolution. When we went through the 360 degree loop, my head was forced down into my lap. I remember it kind of screwed up my neck for the rest of the day. They hadn't installed the headrests on the cars yet, so I don't know if that is what made a difference or if it was just being kid-sized, but I went back about a year later and the headrests were there and I didn't have the same problem. Did anyone else have that happen to them while riding Revolution? 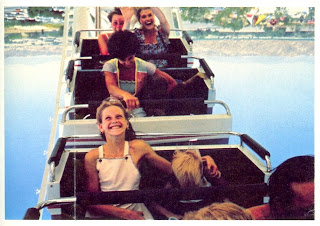 And here are the only four photos that I shot that day. The first one shows Revolution's loop. I had actually rode Revolution one year earlier...."virtually," that is. It was featured in the 1977 Universal film, "Rollercoaster." I remember really liking that movie. The tag line was something like, "This summer, watch for the man watching the Rollercoaster!" If you haven't seen the movie, I highly recommend it. It stars George Segal, Henry Fonda, Helen Hunt (before she won her Oscar), Richard Widmark (after he signed Lucy's grapefruit), and features guest appearances by L.A. radio disc jockey, Charlie Tuna, and the band "Sparks." The real star however, is Timothy Bottoms (before he hilariously played our nation's former president in Comedy Central's "That's My Bush!") as a young man who travels around the country blowing up amusement parks. The film was one of only four that were filmed in "Sensurround." 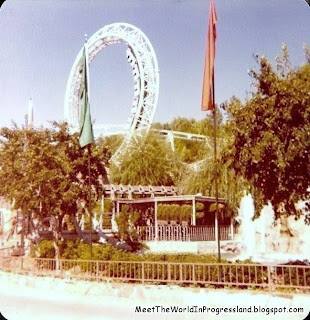 Colossus had already opened before our visit. In fact, it opened on June 29th..... 33 years ago today! But as with many new rides, it was experiencing some technical problems and when we got to the park, we were told that it probably would not be opening until sometime in the afternoon. We did get in line for it later that day....I believe even before it opened, because they had announced that it would be opening for sure. I took these next three pics from the Colossus observation deck while my family held our place in line. Note the dirt and the trucks at the base of the structure. 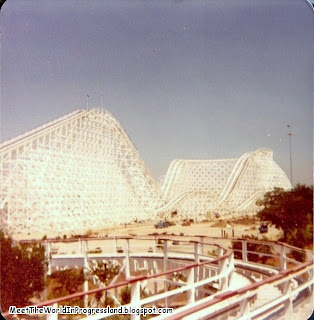 Just on the other side of those trees was "Trollywood," home to the Magic Mountain Trolls. This was sort of Magic Mountain's version of "Storybook Land" and was only visible while riding the "Train to Trollywood" (see the map below). 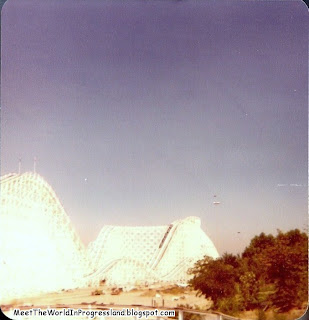 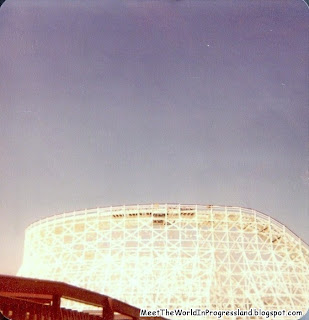 Here's the parking ticket from that day. 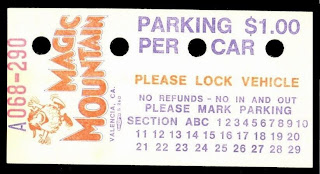 And here's the park map and entertainment schedule. 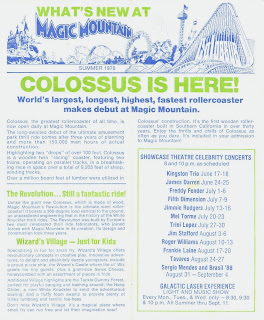 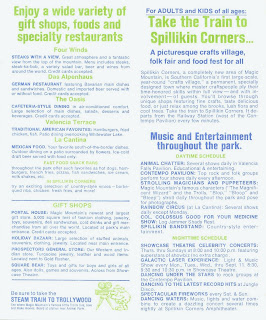 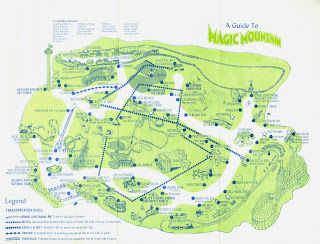 We had seen people in the park wearing these buttons, but when we went to purchase one at the Colossus merchandise cart, they had sold out. 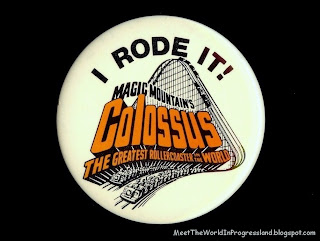 When we got home, I wrote a letter to the park asking if it was still possible to purchase a button. They sent the following response. 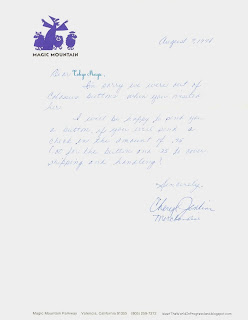 So I sent them the money and I did end up getting an "I RODE IT!" button.

One other memory from that day is that my aunt and my grandparents went along with us on this trip. Actually my grandfather is the one that drove us all up there. He also rode on every ride that day with my brother and me, including Colossus. I remember the ride operators on Colossus warning him about removing his eyeglasses, so he took them off and put them in his shirt pocket and buttoned the pocket up. Well, on the very first hill, the button ripped right off from the force of the glasses which flew straight up out of the pocket and into the air. I remember feeling really bad about him losing his glasses.

When I think about it, my grandfather was always such a good sport. He was also the one that sat next to me the very first time I rode Space Mountain. In my Father's Day post last week, I thanked my dad for taking us to many of the different Southern California theme parks throughout my childhood, but my grandparents also took us on many of our fun theme park outings....including my one and only trip to the Long Beach Pike! I'd like to take the time now to also thank my grandparents for all the wonderful memories they gave my brother and me......I love and miss you both very much! And thanks to my mom too, for such a cool graduation present!
Posted by TokyoMagic! at 5:01 PM

This sure brings back memories of past visits to Magic Mountain, when it was at its peak. I remember being nervous about riding Colossus the first time, but loving it. Got to ride it backwards at some point! I Like the pamphlet with the photo of the model. Also, very cool that they sent you a button. Personal service! Would that happen today?

Your story about your grandfather reminds me of a similar thing that happened to me; I was holding my wallet, and decided to sort of wedge it under my legs during the ride (I forget why!). On one of the hills, I saw the wallet "float" up, heading out of the vehicle, and my brother's kung-fu reflexes kicked in! He slapped it down, and I caught it. I still can't believe it.

Great memories of your grandparents, and of your mom doing something special for you! My grandparents were enthusiastic about taking us to so many of the local parks when I was a kid, including MM. I know that my grandpa always wanted to take us to Disneyland for two days, spending a night in the Disneyland Hotel, but he got ill and was never able to do it.

Major, I didn't mention it, but I was also very nervous about riding Colossus that very first time. It helped having my grandfather sit next to me (my poor brother always had to sit alone....but he was three years older than me!) Hearing your story about your wallet makes me realize just how MANY personal items have probably been lost on Colossus over the years.

I remember when they were running the cars backwards, but I never got to experience that. As for the souvenir Colossus button, yeah....somehow I doubt that kind of personal service would happen today. They definitely would not be sending a hand written response, that's for sure!

I'm so glad you saved your letter and the envelope featuring the Wizard and the Trolls! Great Magic Mountain story, TokyoMagic!

WOW! What a cool post! Of course, since I'm a lot older than y'all, my first visit to MM was not too long after it opened in 1971. I also remember seeing Sonny and Cher perform there!!

The "greatest rollercoaster in the world." What a great memory. It's very cool that you received a handwritten response to your request for the button. Not likely to happen today.

And Major Pepperidge's story of how his brother saved the wallet. That's amazing!

Must be a 70's grand parents things, my grand parents brought me & my brother to MM in June 1971 and every summer for the next ten years.

By 1976 I was spending as many summer days at MM as possible, usually starving & outta $$ by noon but didn't care.

Colossus and Revolution never scared me, however the Eagles Flight sky-way still wakes me up at night.

So cool you saved that letter! I have my button still!

I see the METRO MONORAIL on that Map!

Dan, Thanks! Yeah, I'm glad I saved it too.....I wish they hadn't gotten rid of their Wizard and Troll mascots!

Connie, Sonny and Cher!!!! Too cool! I would have loved to see them perform.

SWS, I've always had a pretty good memory, but as I get older I realize that I am forgetting stuff so I'm trying to document what I do remember about these past theme park trips. For me, the blog is the perfect way to do it.

VDT, I remember that Eagles Flight skyway. It was super high! It bothered me a little because I remembered the story of the couple that went to Magic Mountain on their honeymoon and the gondola fell, killing one of them and paralyzing the other. Yikes! I saw the Metro Monorail on the map when I was scanning it and I thought of you! I wish they (and Knott's) had kept more of their family type attractions!

"No cumbersome ticket books required." Check out that snide jab at Disneyland!

What's that rollercoaster with an automobile-looking "car"? Was that Mountain Express?

I believe this was the same year as Phantom of the Park, which would've been filmed in May. :-)

BIWATW, That was a snide jab at Disney, wasn't it! And yes, that rollercoaster was the Mountain Express. I loved that ride! But as with many other attractions that were fun (Magic Pagoda, Metro Monorail, Eagle's Flight, Crazy Barrels, etc.), they took it out. :-(

Just stumbled on this compilation of news clips covering the press preview of Colossus. I especially got a kick out of the first commentator's editorial commentary.

Chuck, oh my gosh....I remember all of those news clips, especially the first two. I had even recorded them with my "cassette tape recorder" back in the day, but I'm not sure what happened to those "audio-only" recordings. Thank you so much for sharing those! And I just bet that the P.R. people at Magic Mountain hated it when Chuck Henry said that Colossus was "a good coaster, but not a great one!"