"This high-energy street festival ignites Hollywood Pictures Backlot with fun for the whole family. Journey under the Recognizer and get swept into The Grid, where a live D.J. spins techno and dance music. Check out TRON: Legacy 3D Sneak Peek. Watch Sirens groove to the beats of Daft Punk and others, while digitally projected Lightcycles zoom around you. Face off with enemies and allies at Flynn's Arcade. Try incandescent concoctions at the End of the Line club. Be amazed by an eclectic array of street performers, including laser and martial artists." 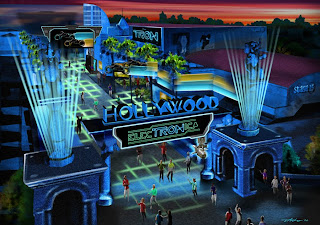 Above, is the official concept art for ElecTRONica and below, is a photo of the Hollywood Pictures Backlot entrance. 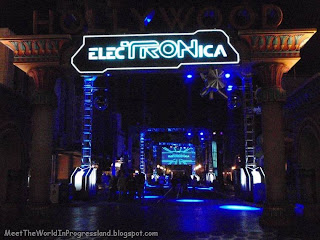 The ElecTRONica overlay is a little bit "darker" than Glowfest. 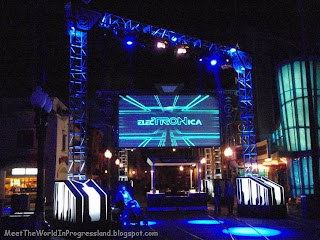 This piece of concept art shows the "Hollywood Studios" section of the Hollywood Backlot. 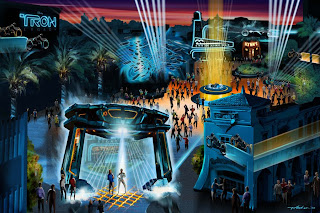 The structure that guests are walking under is "The Recognizer". 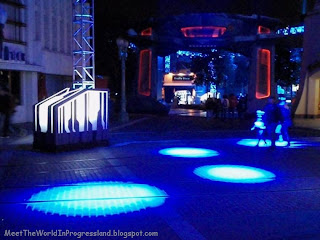 Here's a better view of it in the daytime. 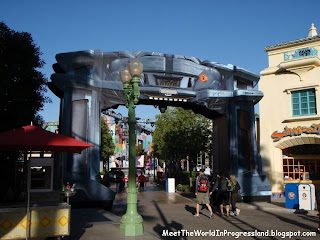 It appears to have been built over the existing Hollywood Studios arch. Here's a "before" shot: 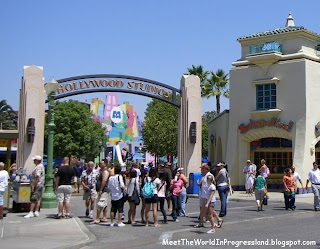 And here's the view from the other side: 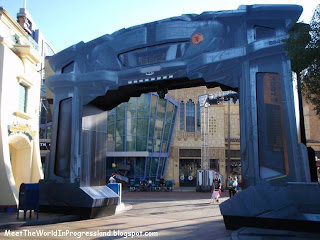 While we're in this area, let's take a brief detour and visit my old friend from Walt Disney World. Hey wait a minute, "One Of Our Sea Serpents Is Missing!" The Sea Serpent from EPCOT to be specific. I wonder if he will be making a return or if he is gone for good? There's nothing left in this area now except for some rust spots on the ground where the former World of Motion props once sat....... 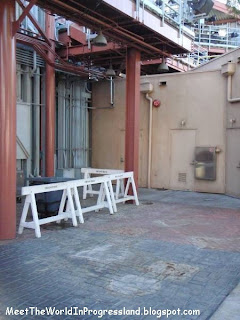 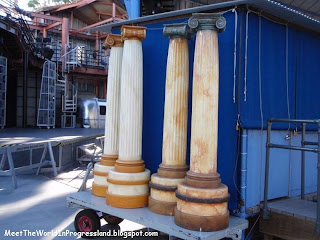 Back to ElecTRONica.....a DJ booth now sits on top of the Sorcerer's Apprentice fountain. 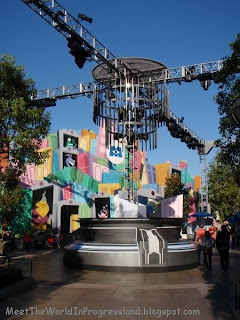 Here's a "before" shot. It looks like Mickey may have been removed for the temporary overlay. 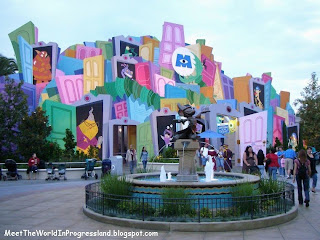 At night, dancers perform in this area. 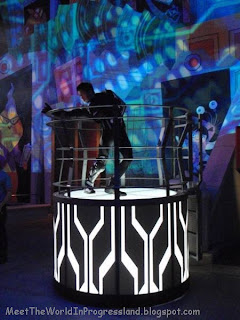 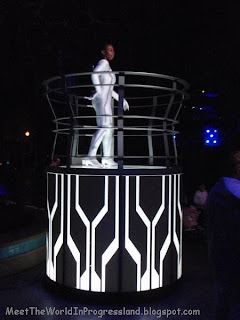 Across the way in the Muppet theater, a 3-D film plays giving guests a sneak peek of the upcoming "TRON: Legacy" which opens on December 17th. 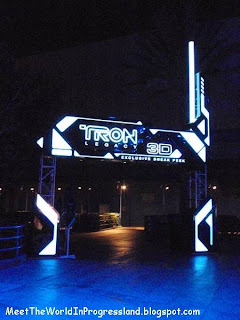 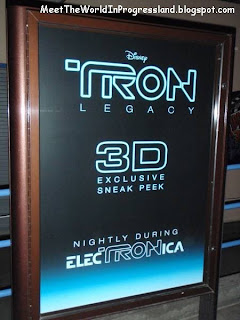 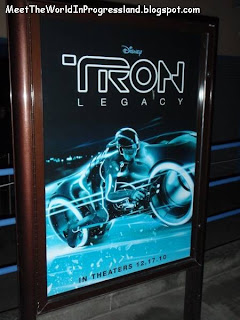 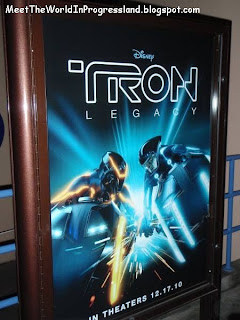 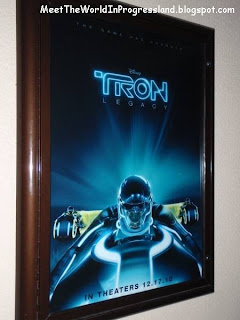 A recreation of a light cycle from the film sits outside the doors to the theater. 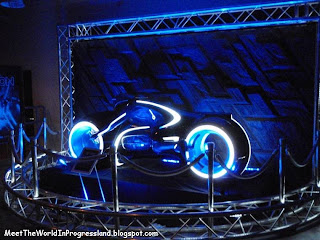 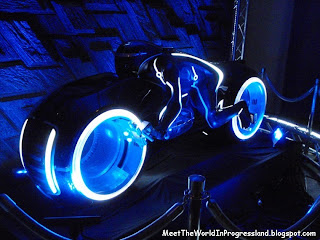 Here's a shot taken with the "dreaded" camera flash, but it helps to show the figure on top of the cycle a little better. 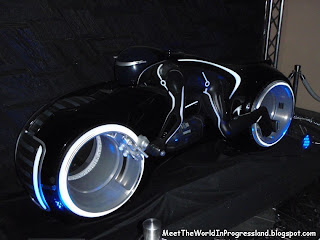 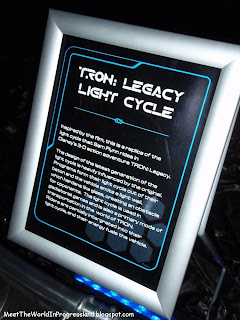 The diner set in this area now has a function! A bar and lounge area have been added to it. 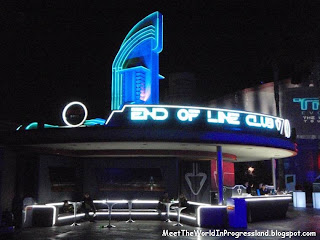 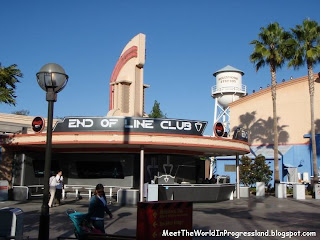 And a "before" shot: 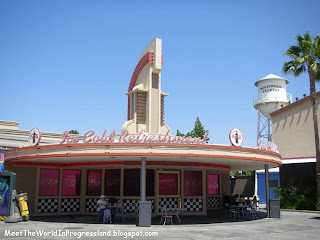 Next door, a recreation of Flynn's Arcade from "TRON: Legacy" has been set up in the old Hollywood and Dine restaurant space. 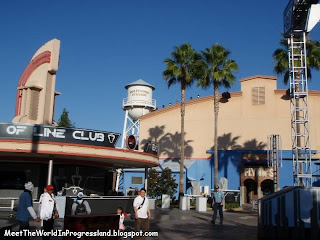 Please check back for Part 2 of this post where we will go inside Flynn's and have a look around. We will also take a look at a piece of Tron ephemera that I have saved since the early 1980's. 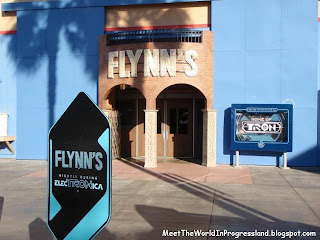 I need to spend about 20 minutes examining this post - I'll get back to ya :-)

That light cycle is so cool.

SO... no editorial from you on Electronica! Did you like it? Hate it? Did it feel like a cheap overlay (I wish that Recognizer was more sculptural and didn't rely so much on the trompe-l'oiel effect)?

My spidey senses are telling me that the new Tron movie is going to be all bling and no substance - hopefully I'm wrong!

I never saw the first Tron. This new one looks like it could be interesting (I like some of the music I heard from the soundtrack).

Too bad the Sea Serpent is gone! I failed to see this on my visit a few years ago.

VDT, I'm still waiting for you to get back to me! Just kidding....

Major, I know, I know....and I did the exact same thing with my Glowfest post. I guess I should have stated that I did like Electronica. As far as overlays go, it didn't feel as cheap as Glowfest did. The recognizer actually looks much better at night, I just couldn't capture it very well with my camera. The spotlight on it's underside moves around and "scans" people. Or is it "recognizing" people? I should have also mentioned that the scenes that are shown in the 15 minute preview of the film makes me want to see it. Now whether I actually go and see it in the theater or just wait until it's on DVD or cable....that's another thing!

Dan, I saw TRON in the theater when it first came out and then I think I've tried to watch it once since then and couldn't sit through it. Again, I will definitely give this one a chance. I hope they take good care of the Sea Serpent and the other WOM props. Maybe they're in storage along with the old Nature's Wonderland Mine Train car now that it's been removed from the tracks alongside the Rivers of America. They should make a Disney theme park museum showcasing old ride vehicles, props, etc. Heck, I'll go ahead and say it....the parks themselves SHOULD be a museum. Ha! That's for all those people that say "Disneyland is not a museum."

BTW, what was the sea serpent and why was he there?

Major, the Sea Serpent was from EPCOT's World of Motion attraction (replaced by Test Track). It was chock full of audio-animatronics, some of which ended up in Anaheim's 1997 "politically correct" makeover of Pirates of the Caribbean. The Sea Serpent for some unexplained reason ended up hidden behind the buildings in the Hollywood Backlot of DCA and labeled "movie props." You can see what the Sea Serpent looked like in his original home at EPCOT (here)