For today's post we have some Los Angeles Times newspaper clippings from 30 years ago. Up first, is an advertisement for the 1980 holiday season at Disneyland. The S.O.S. band was back at the park and the Lennon Sisters were performing as well. Michael Landon was the celebrity guest for the Candlelight Procession/Ceremony that year. I like the way that this ad was drawn as if it were needlepoint....or is it cross-stitch?

Come home for the holidays......come home to Disneyland! 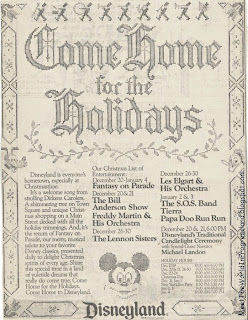 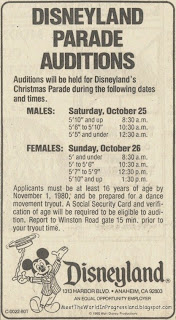 And here's an ad from December of 1980 for the first re-release of the animated film, "The Aristocats."

I often wonder about the folks working at the parks on Christmas Day. I imagine it's probably really fun working in something festive like the parade or making the candy, but maybe not so fun working the shops or restaurants.

Dan Alexander, being a former Disneyland cast member, it's fun, despite how crowded it can be on that day. It's what you make of it that counts. Early in the morning, it's nice and quiet but come 11 a.m. then it's pandemonium. But overall, it's fun to be there!

Dan and Terrance, working in the parade on Xmas Day in 1981 wasn't too bad, but I still hated not being with my family that day. Fortunately, that's the only time I've ever had to work on Xmas day.