I Was A Teenage Christmas Tree At Disneyland!

I was recently going through some boxes of Disneyland items and came across some employee materials that I received during the brief time that I was a cast member....29 years ago! Working in the Christmas parade at that time (1981) meant that you were hired in October and then scheduled for both Disneyland Orientation and Parade/Entertainment Orientation before you began working. Parade rehearsals were scheduled during the month of November and the first two weeks of December (back then the park's Christmas parade and entertainment did not begin until mid-December). You then performed in the parade....every performance, every day, for two weeks straight. After that, you were released from your employment with Disney.

I still have all the handbooks that were given to me, "Disneyland and You", "The Disney Look" and others, but I believe I have seen them posted on other blogs recently....plus they all have many pages to scan, so not being in a scanning mood right now, I have chosen a few other odds and ends to post. These first two items are a folder and large envelope for holding "new hire" documents. 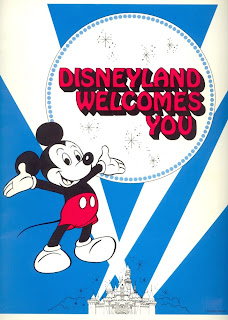 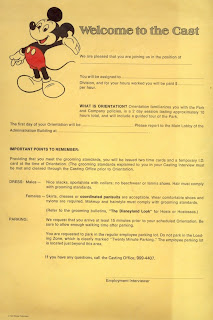 This card shows my scheduled time for orientation at the Disneyland University, which was located in the Administration Building behind Main St. and Tomorrowland. Is there still a DL University at the park? 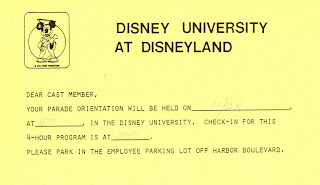 Next, is a welcome letter and work permit information. 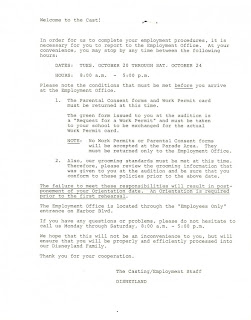 Here's an article about the Christmas Parade that ran in the L.A. Times that year. I was one of those Christmas trees picture behind Santa's float. I'm not sure when this photo was taken however, because we never followed Santa. We were a part of the Finale Unit and were always positioned in front of Santa's "silly" reindeer. You gotta love Santa's helpers or the "Glock Girls" as they were called, because they played the Glockenspiels. 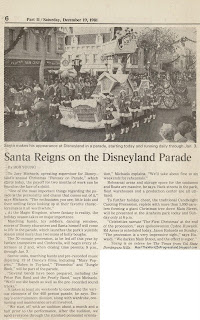 These next photos were taken by a friend. In the first photo, I'm the second green tree from the left.....I know that because of the position of the trees. 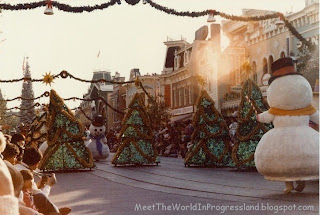 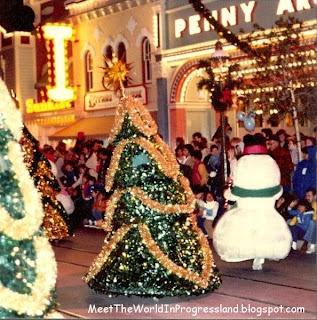 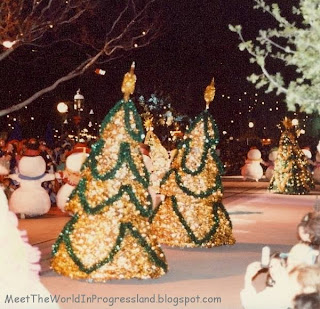 This advertisement was also from the L.A. Times. Eddie Mekka of "Laverne and Shirley" fame was performing on the Space Stage and Skiles and Henderson were back at the park, yet again. I miss the Kids of the Kingdom! 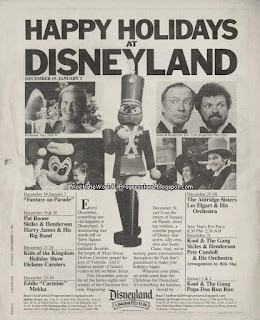 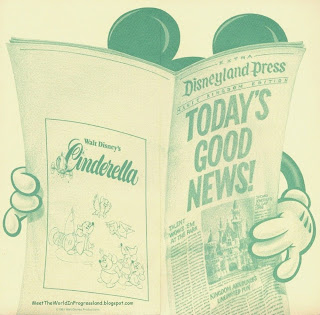 This was the scheduled entertainment for December 21-24, 31, and January 3rd. 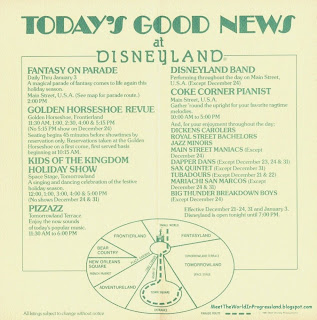 This was the schedule for December 25-30th. Looks like Eddie Mekka was teamed up with The Aldridge Sisters (from the Lawrence Welk Show)....and maybe with Boo Boo Kitty too! 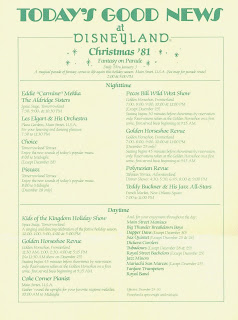 This was the park guide at the time. 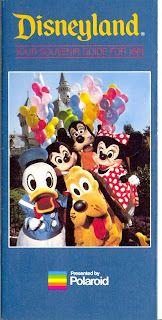 Richard Ferrin, who was a Clown Fireman in the "Dumbo Circus" unit of the parade, designed this T-Shirt and made them available for all the parade cast members. Richard was also "King Lion" in the Main St. Electrical Parade and rode on the the calliope float in the Dumbo Circus unit of that parade for several seasons. 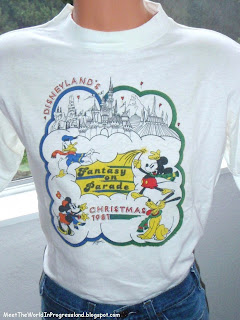 It was a tradition back then to take a cast photo and have everyone pose on the framework of the "Living Christmas Tree" from the Candlelight Procession/Ceremony. A few things to note in the photo below:
-Santa from the parade is dressed in full costume and standing at the top of the Christmas Tree.
-The two guys to the left of the "Tree" and standing above everyone else are actually standing on top of the old "Show Biz Is" sign which is laying down flat. Just behind them is the ballroom canope from the Cinderella unit of the Main St. Electrical Parade.
-The people in the lower right holding the "53" decals are from The Love Bug unit and are also holding a pair of dummy legs that were used during the parade when Herbie would "swallow" a motorcycle cop/stuntman. Just above them is the timecard shack and beyond that is the employee parking lot (I believe this area completely disappeared with the relocation of West St./Disneyland Dr.)
-West St. would have been off to the right in this picture. The trees in the background are a part of the park berm and the rear section of the Rivers of America.
-A couple more things to note... there are several people that are wearing part of their parade costumes. Three of the clowns from the Dumbo unit are wearing partial costumes or wigs.....the guy that played Gideon in the Pinocchio unit is wearing his costume without the character head.....and the guy that played Burt in the Mary Poppins unit is wearing his straw hat. 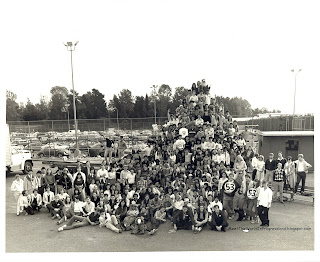 During the casting for the parade, they had every position that was needed written out on index cards. After being selected, they would give you the card and then have you take it over to a table to fill out employment forms. I've kept my casting card all these years. 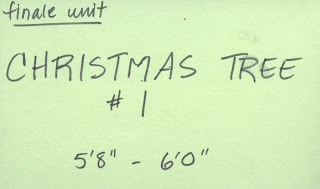 Okay, I don't have a hoarding problem (honest!) but I kept my locker card too. Hey, I'm just sentimental about the one and only time that I worked at The Happiest Place On Earth! 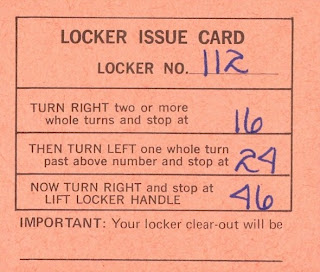 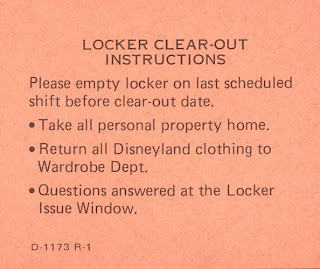 After the parade was over, this letter was sent out as a thank you and to let us know about the upcoming auditions for the Main St. Electrical Parade. 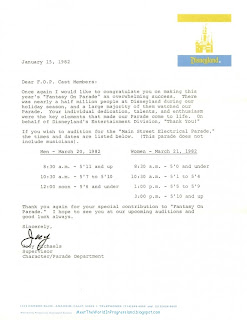 I did actually go back for the Main St. Electrical Parade auditions a year later and was hired by Disney a second time. By this time, I had already gotten a job at Knott's Berry Farm, which was more hours and better pay than working in parades at Disneyland. I somehow thought if I got hired for the Electrical Parade, I would ask Knott's if I could just work daytime shifts and then I would go over to DL to work nights in the Electrical Parade. Well, what I didn't know was that they were also casting at the same time for the "American Gazette" parade which was a daytime parade. I ended up being hired for that parade and was too young and afraid to ask for a part in the Electrical Parade instead. So I chose to keep the job with the better pay and hours at Knott's and called Disney a few days later to tell them I couldn't take the part....even though I hated doing it!

For a while, I often thought about going back to Disney, but as time went by at Knott's, I formed some very close friendships that I really didn't want to leave behind. Of course, eventually I did leave Knott's, but I'm glad to say that I have kept many of those friendships even after all these years. As for my time spent working at Disneyland...it was short, but it is something that I look back upon and have nothing but fond memories!
Posted by TokyoMagic! at 9:32 PM

Wow, you kept everything! I gave away all of my castmember paper stuff to another Disneyland fanatic, LOL. Love the photos!

"too young and afraid to ask" been there and done that...

Have a super Merry Christmas!!!!!

To play a tree, you have to BE a tree. Take it from me!

Do you remember Barbara Walters getting so much guff for asking "What kind of tree are you?" during an interview? Well, we know you are a Christmas tree!

This is truly a terrific post Tokyo!
So glad you didn't throw out your old DL ephemera.

Most of us have never worked for the Mouse so thanks for giving us a little more insight. Do you still have "Christmas Tree" on your resume?

This is so sweet, and isn't it awesome to be a tree? I have to ask - I see green trees with gold garland and gold trees with green garland. Were both colors of trees in the same parade, or were the photos taken at different times?