Welcome to Part 2 of my ElecTRONica series (to read Part 1, Click Here.) The flyer below is being handed out to guests as they enter the Disneyland Resort parking structure.

Before we take a look inside Flynn's Arcade, I thought I would post just a few more general shots of ElecTRONica. Here's another view of the entrance. 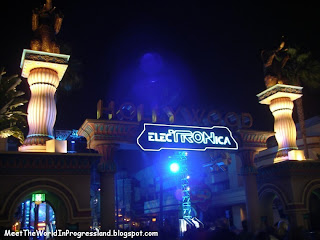 And another attempt at a nighttime shot of "The Recognizer". 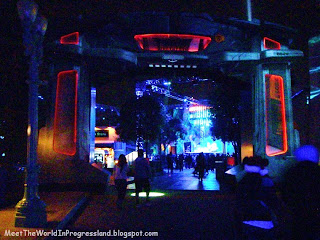 In Part 1 of my ElecTRONica series, I posted a daytime photo of the DJ booth in front of the Monsters Inc. attraction. Here's what it looks like at night. The people in the foreground are all dancing the night away. 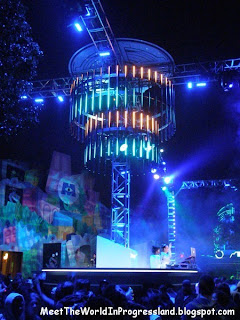 And now we'll enter Flynn's Arcade, which is located in the former Hollywood and Dine restaurant. 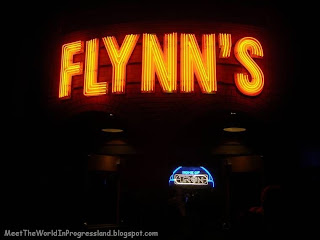 It feels like 1982 all over again! The arcade is filled with vintage video games....LIKE, TOTALLY! Also, the music playing throughout the arcade appears to be specifically from 1982....."We Got The Beat", "Gloria" and "Rock The Casbah", just to name a few of the songs from memory. 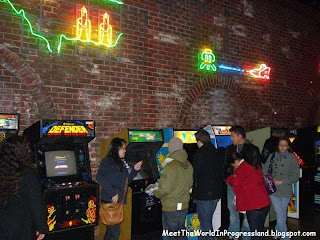 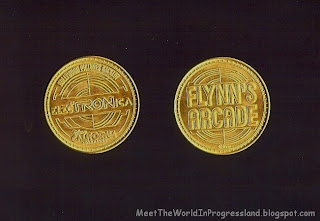 I experienced a temporary flare-up of "Pac-Man wrist" after playing just a few of these vintage games. 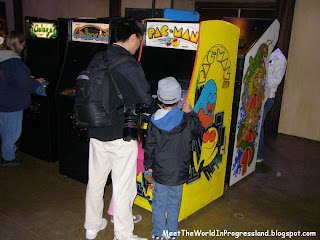 I never did get hooked on Donkey Kong. Where's the donkey anyway? 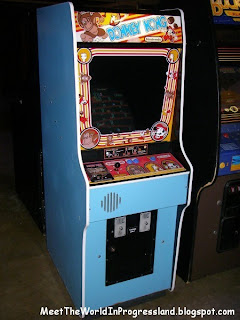 But I used to play Frogger a lot! 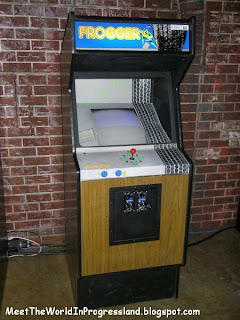 How can you not love that font and those graphics.....a frog trying to cross the road while wearing a tie and carrying a briefcase! 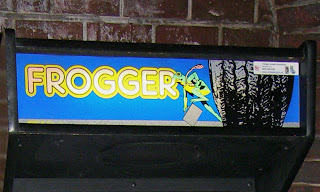 Watch out for the cars! 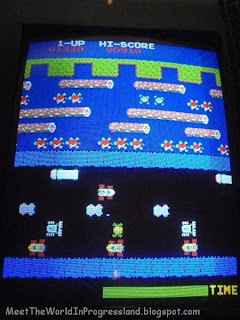 There's some cool neon artwork on the walls of the arcade. 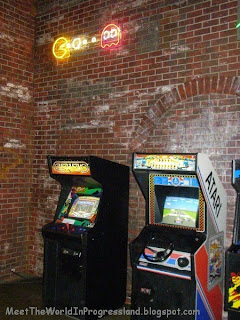 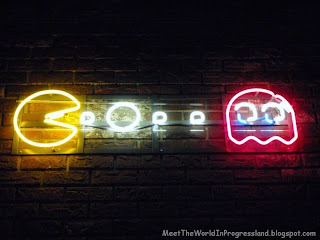 "The Recognizer" from TRON is depicted in neon. 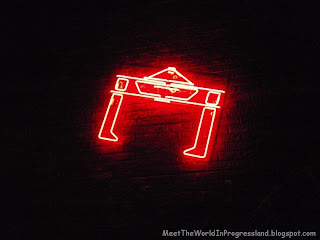 And here's the actual TRON video game from the 1980's. 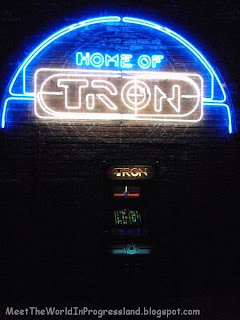 The "flash" picture below, reveals a secret doorway hidden behind the game. Since "TRON: Legacy" doesn't come out until December 17th, I really can't tell you much more about this door other than the fact that it's shown very briefly in the "sneak peek" that's currently being shown in the Muppet Theater in the Hollywood Backlot. In the movie, the hidden doorway is located behind the Tron game in Flynn's arcade, just as it is here in the recreation. POSSIBLE SPOILER ALERT: They show the door open in the preview and there's a dusty office with an old computer sitting on a desk located behind the wall. 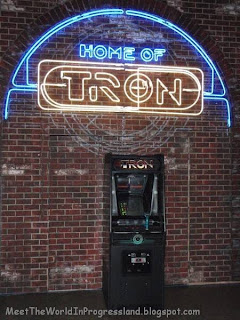 I used to love the TRON arcade game too. The Starcade in Tomorrowland had several TRON machines once upon a time. The Buffalo Nickel Arcade below Knott's Bear-y Tales at Knott's Berry Farm had a few TRON machines as well. 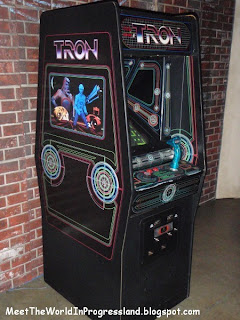 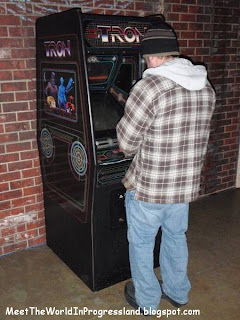 Here are two of TRON's four games. The Lightscycle Grid: 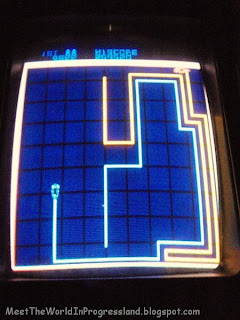 And the Tank Maze: 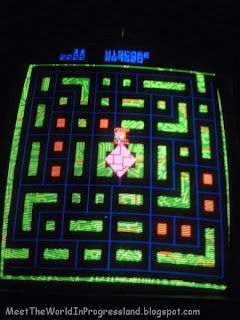 The item below, is something that I've had since the eighties. It's a flyer from Bally/Midway, the makers of the TRON arcade game. These must have been distributed to arcade owners to try and get them to purchase the units. 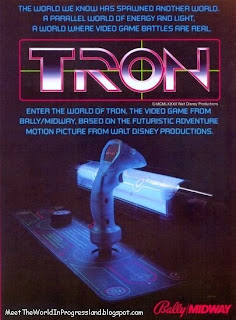 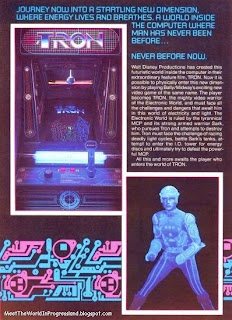 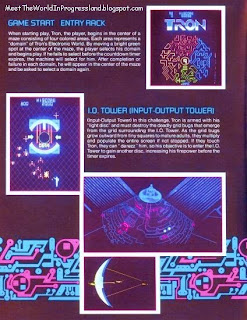 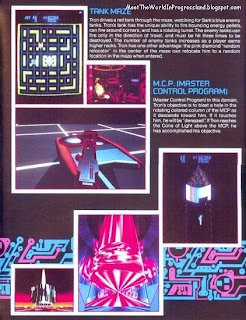 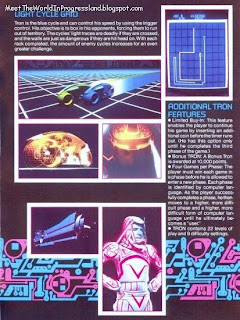 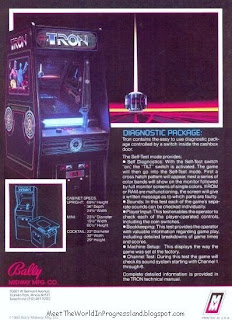 Flynn's Arcade is supposed to be temporary, but it appears to be very popular.....ESPECIALLY with adults. I think it would be great if when ElecTRONica is over, they moved all the machines to the Starcade in Tomorrowland. It would definitely bring more business in there than what they get now....but who knows if they would be smart enough to do that? For now, I'll be reliving my video game-playing days over at California Adventure. See you all at Flynn's Arcade. I'll be the one wearing the wrist brace!
Posted by TokyoMagic! at 2:40 AM

For some reason I never got into most arcade games, even though they were certainly booming when I was a kid. However at some point we got an early crude Nintendovision for our TV, and we played the hell out of those games, including a version of Donkey Kong. I admit that I suck at video games!!

Excellent post - I gotta get over there and check this place out.

Stellar idea to move it all over to the Starcade, if somehow TRON 2 is hit, maybe, just maybe we can get a TRON attraction at Disneyland!

I too am/was video game challenged. My exception would be "The Disc's of Tron" I played it so much I actually got good at it! It was 1/2 statigy, 1/2 skill From Wiki: "Discs of Tron uses several platforms, and the player must beat Sark by throwing discs at him (a maximum of three at a time, which would return to the player) and eventually derezz him or push him outside the platforms. While the player, along the discs, can use a deflector, Sark has two more weapons: a chaser and a super chaser, that can only be destroyed with the discs.
As the game progresses, the player is given different configurations of platform rings to jump and stand on. The video game also uses a spinning knob that is used to move a mouse-like cursor around the playing field so you can judge where the discs will deflect off the walls and on later levels the knob can be pulled up or pushed down depending on the height of the platforms."

If TRON: Legacy sucks I'm gonna be upset, all this time (and money) you'd think they could "get it right".... Lets hope.

This looks like so much fun! I miss playing those old games, though I do have a plug-in version of the Ms. Pac Man game.