Hey everyone! Sorry I didn't post anything last week. Between major changes going on at work and multiple family events/stuff, I have been so incredibly busy lately. Anyhoo, I've had a small batch of Walt Disney World slides in my collection for a while now and I am going to begin posting some of them. In the past one and a half years that I've been blogging, I've never done a full post just on Walt Disney World, but it's not really for any particular reason. I also have a bunch of Disneyland Paris photos and so far I've only posted two of those! I should probably try to branch out a little beyond Anaheim and Tokyo! Since I am not an expert on WDW however, I will ask everyone for their help. Please feel free to join in and correct or add any info as needed. It will be greatly appreciated. Thank you!

These first three slides are dated March 1973. They appear to be taken in the general area of where Splash Mountain exists today. I'm assuming that means that those totem poles no longer exist...at least I don't remember seeing them on the trips I've made to the Magic Kingdom in recent years. In the background, we can see a drained Rivers of America and the construction of Tom Sawyer Island taking place. I did some research and found out that T.S. Island did not open to the public until May of 1973. Major Pepperidge over at Gorillas Don't Blog posted a 1973 Keel Boat picture last month, that also showed some Tom Sawyer Island construction off in the distance. 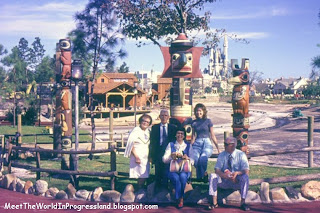 There appears to be a green contraption in the river bed on the far right. Could this be a pump to keep the Florida rain waters out during construction? There is also a bulldozer on the far left side of the picture. The lady wearing the smart pantsuit and holding the groovy purse seems to be having fun....she reminds me of my grandmother! 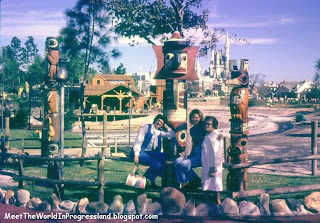 This next pic shows The Hall of Presidents building on the far side of the river. Also, just to the right of the shorter totem pole, a portion of Harpers Mill and it's water wheel can be seen. 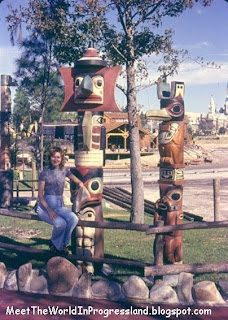 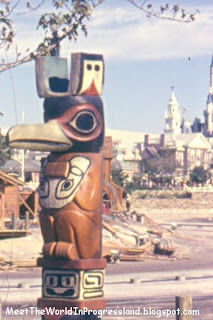 Here's a shot from just about a year later, July 1974. Now construction is taking place on the other side of the totem poles. Does anyone know what this particular construction could have been for? Sorry....this was the best I could do to correct the color on this slide. 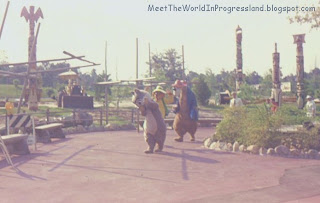 Again, these were all taken in the area of the park that is now occupied by Splash Mt. Just for kicks, here are a couple shots of how the area appears today. 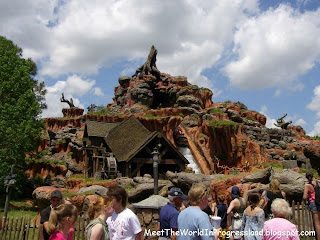 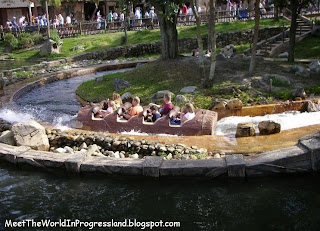 Nice shots. It certainly looks like you've got Tom Sawyer Island under construction there. Rare stuff - and fun to see! Thanks.

Wow, those are cool pictures! Things sure look different these days.

I wonder if the totem poles were relocated to Fort Wilderness or another park.

Great shots! Even though I was just there, still don't have my bearings like I do for Anaheim - probably too much for my brain to handle!

Fantastic photos! I am definitely fascinated with the early years of WDW.

Great pics of the early years at WDW! Was just at the World and I took some photos of 3 totem poles that are located just down towards the Rivers of America from the observation area for Big Thunder Mountain Railroad. They are behind a small building that was maybe used for the old canoe rides? Not sure if they are exactly the same totem poles, but sure are similar. (Will send photos if you'd like.)

Thanks for commenting, Anonymous! I wish I had known about those three totem poles on my last visit to WDW. I only found out about them a couple months ago when Theme Parkeology posted a photo of them. (That pic can be seen by clicking on the Theme Parkeology link below.)