Let's take a look at a long extinct Disneyland eatery, The Lunching Pad. This little snack bar used to be located underneath the PeopleMover station and Rocket Jet platform in Tomorrowland. It's original name was The Space Bar and that signage can be seen in these next two photos from Gorillas Don't Blog (used here with permission - THANK YOU, Major Pepperidge!) Incidentally, there was a larger "Space Bar" restaurant in the first version of Tomorrowland, but it was torn down in 1966 to make way for the Carousel Theater and the New Tomorrowland of 1967. 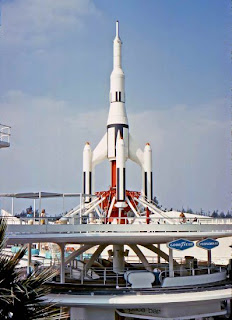 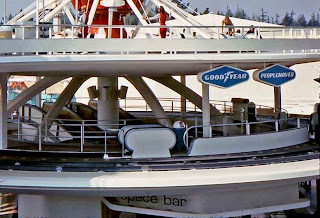 Looking through my collection of old Disneyland guides, it appears the name of this facility changed from The Space Bar to the The Lunching Pad sometime between the Spring and Summer of 1977. The change appears to have happened around the same time that Space Mountain opened. Here's a pic of the Lunching Pad as it appeared in September of 1995. 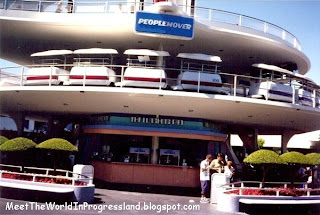 I like the font that was used for the signage. 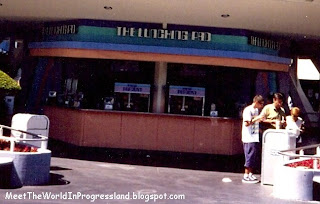 After the release of "Toy Story" in 1995, The Lunching Pad received a "Little Green Men" makeover. These next photos were taken in October of 1996.
. 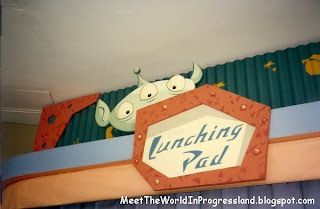 Notice the white architectural element that sits between the two popcorn cases and also biscects the area behind the counter.....later, we'll see a shot of how that appears today. 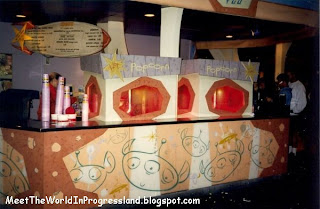 A close-up of those purple Disneyland cups can be seen (here.) 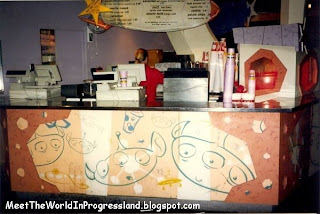 What, no Space Mist? I guess it had already been removed from the menu. How about those 1996 prices!

Shortly after the 1998 redo of Tomorrowland (UGH!), this space was transformed into the headquarters for Radio Disney. While I don't have any pics of the building during this time, I do have this magnet that was given out free (yes, free!) at the park to promote Radio Disney. 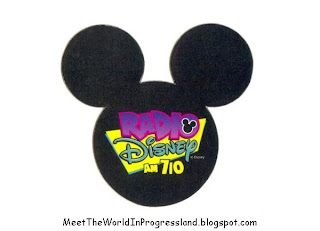 In 2007 this space changed once again, and it is now a souvenir shop called TomorrowLanding, featuring "Gifts from Outer and Liquid Space."
. 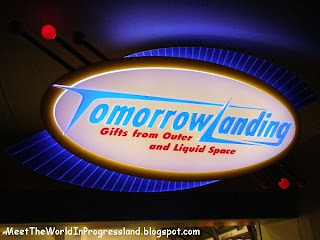 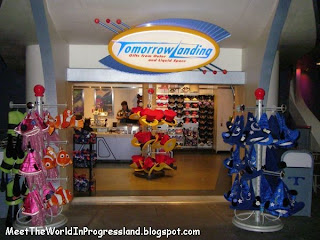 That architectural element pointed out earlier is now located in the middle of the shop. There are more of these that surround the building. I believe they are the actual supports that hold the structure up. Unfortunately, the rest of these were partially covered up with walls during changes that were made in 1998 for the Rocket Rods. I would love to see this structure returned to it's original 1967 glory with the Rocket Jets twirling up above once more, and some version of the PeopleMover brought back. The new shop could even stay! ;-) 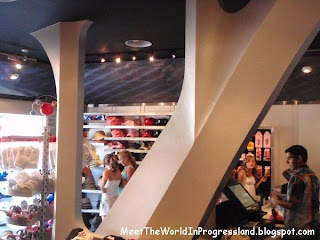 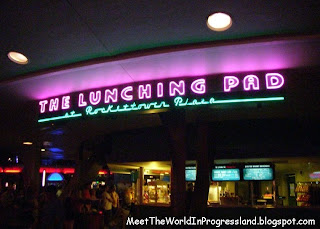 Tokyo Disneyland has a snack bar under their Rocket Jet platform too, but theirs is called the Space Place Foodport. The gantry lifts that take guests up to the Rocket Jet (Star Jet) flight deck can be seen in the background. Hey Disney, bring back Anaheim's gantry lifts! 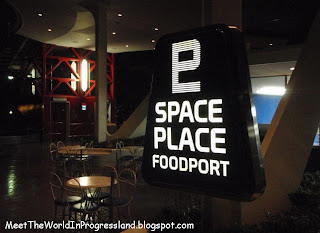 I hope everyone enjoyed this little trip back in time to Disneyland's Lunching Pad!
Posted by TokyoMagic! at 12:04 AM

This spot always seemed so orphaned. A hidden piece of Tomorrowland. Really enjoyed your overview. Thanks!

Great post! I ate at Redd Rocket's in Tomorrowland on my last visit, and really enjoyed that (very retro!).

How in the heck are Sorcerer's Apprentice and Mad Hatter lids (if that's what those red and yellow things in front of the shop are) "from outer (and/or) liquid space"?

Thank you George, OTB, and Dan!

Anne, there are also Goofy and Princess hats on those racks....very Tomorrowland-ish, huh? Unfortunately, they don't care about "theme" anymore. It's very sad, indeed!

Awesome post! I remember all these locations/names, I might have a personal photo (somewhere) of the Radio Disney booth from when they actually used it. It sat closed for a while too...

My brother and I each thought that the old Space Bar had "Pluto burgers", but I haven't found any evidence to prove it. Maybe we just imagined it!

Flash back. Jody and I designed the temporary Toy Story Alien re-do in the 90s. Wish it could be returned to its original look.