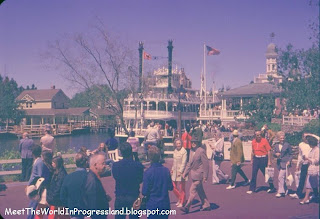 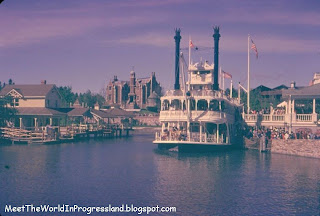 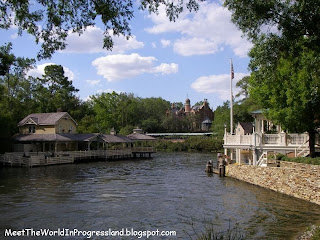 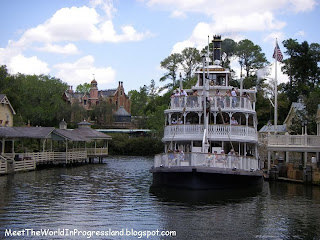 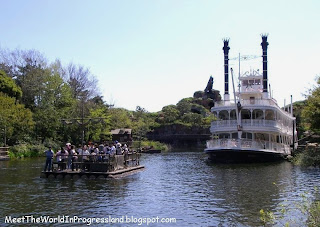 Makes me appreciate Disneyland even more to have 2 completely different large ships to choose from. Had no idea that the Fowler was scrapped and that they'd had 2 Riverboats! Thanks for the awesome post.

I agree, Dave. It definitely makes me appreciate having both the Columbia AND the Mark Twain at DL. At first, I didn't know that WDW had two riverboats either. I had seen photos/postcards/etc. of the Admiral Joe Fowler, but assumed it must have been modified at some point into the Liberty Belle. I still wonder why they had two white triple-decker paddle wheelers on the river at the same time? Seems to me they could have come up with something different....or even a duplicate of DL's Columbia Sailing Ship.

When I was at WDW with my folks in December, my Dad really wanted to go on the boat, because he thought the Tiana's Showboat Jubilee would sing for us! I had to explain to him that it didn't work like that. :-)

Did/does WDW do Tiana's Showboat Jubilee too? I regret not getting over to Disneyland to see it before they drained the Rivers of America for rehab.

Nice 'Then & Now' shot. Like you, have always wondered about the duplicate styles and 'musical chairs' played with the steamship names over the years...

I never bought the "It was damaged beyond repair" excuse, I mean come on, they build these things from scratch, just rebuild whatever was damaged?

Nice before and after shots!

VDT, I'm kind of suspicious of the "damaged beyond repair" remark too. Now I'm starting to wonder if they pulled it from service just so they could reuse the parts on Tokyo DL's Mark Twain and save some money. After all, WDW's Mickey Mouse Revue also closed in 1980 and was packed up and sent to Tokyo because Disney didn't want to spend the time or money to replicate it.

Thanks for the great WDW photos! I love all the sites out there chronicling changes at the parks over the years--but so much of it is Disneyland and it's nice to see the Maqic Kingdom for a change.

I also would bet that the primary reason Fowler didn't return was Tokyo. That said, doesn't Paris currently have two riverboats at once?

Hey Brer Dan! I forgot all about Paris having two steamboats also. I just did a little internet research and it appears that they are both still running. I was there in 2005 and rode on the "Molly Brown," but the "Mark Twain" was in drydock undergoing a major rehab at that time. Again, why did they build TWO steamboats and not something completely different like Anaheim's Columbia?

The Paris steamships are a bit different from one another. The "Mark Twain" is the traditional sternwheeler like in the other parks; The "Molly Brown" is a sidewheeler, more like the old boats that used to ply the Seven Seas Lagoon and Bay Lake at WDW.

As a teenager, I used to visit WDW almost yearly (during the busy Presidents week)and remember when the two steamboats were used simultaniously. Back when MK was the only park at WDW the crowds were insane during that holiday period. Both paddlewheelers would sail with capacity crowds all day long. Not until later in the evening would one be parked in the canal behind the site of what is now Big Thunder. Even with two ships in service, there was still a wait to ride. Oh...the good old days. Keel boats were also in service during this time and some years even the canoes.

I read that the Fowler was being lifted out of the water (north of the Contemporary at the boat maintenance) when it slipped out of the lift and the hull was broken. If this was indeed the case, it would have taken a huge amount of $$ to repair. Building a new riverboat would probably have been less expensive. As the MK had just added BTMRR at this point, management probably figured they didn't need the second riverboat. I also read that parts of the Fowler ended up in Tokyo, most notibly the ships bell.

My above comment was meant to say, "as a teenager in the 70's"

Hi Steve...thank you for commenting and also for the additional information about the steamboats!