Thirty three years ago today, Space Mountain opened at Disneyland. About two months after it opened, my grandparents took my brother and me to the park to check it out. I still remember sitting in the front seat with my grandfather for that very first ride and the excitement of not knowing exactly what to expect.

Below, is the park entertainment guide that I saved from that day. 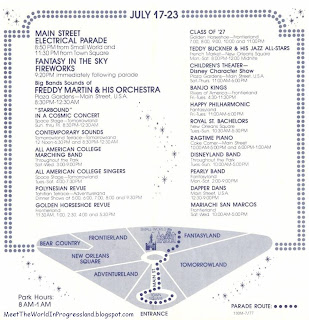 Here's a photo that I took with my Kodak 126 Instamatic camera during that visit. Doesn't the whole Space Mountain Complex look bright and shiny and new? Hey Disney, bring back the Speed Ramp, the Space Mountain Stage, and the Space Place Restaurant! 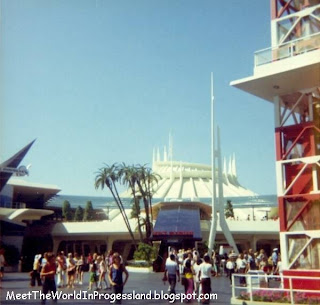 Prior to this visit, I was clipping and saving everything that was written about the new attraction, including this L.A. Times article that reported on the opening day ceremony and "inaugural flight." 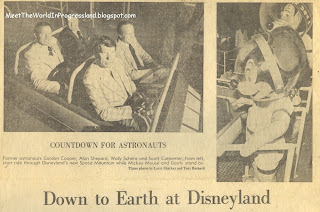 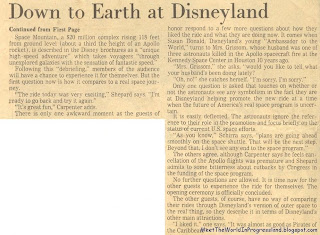 This photo ran in the local newspaper. I have saved these newspaper clippings for thirty three years! 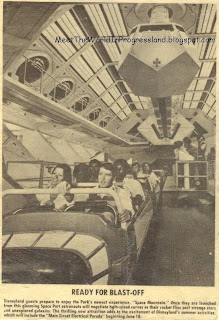 I bought the Space Mountain set of Pana-Vue slides about thirty years ago, but never realized until now that the people in this particular slide are the same people in the photo above. I wonder where these people are today? Hey, that guy in the second row is looking at the camera.....BAD MODEL! 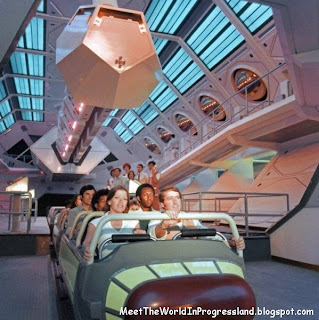 When I ride Space Mountain today, I often think back to when I rode it that first time with my grandfather. My grandparents actually took us back to the park eight months later and I was able to ride it with him again. (I also rode Colossus at Magic Mountain for the first time with my grandfather after it opened in 1978....but that's the subject for a future post!)
Happy Birthday, Space Mountain!
Posted by TokyoMagic! at 12:01 AM

Awesome post!!! I was there the first few days, but totally chickened out till the next year!

Neat about your grandfather, those memories are what life is all about. Thanks for sharing.

Great memorabilia! You know, yesterday I saw a new K-Nex Space Mountain set online that I really like (I don't know if I'd have the patience to actually put the thing together, though).

How did you manage to save that Space Mountain flyer and not have it all wrinkled and beat up like everything I saved??

VDT, Dan and Major...Thanks for commenting on this post!

Major, to be honest, I remember my grandmother keeping this kind of stuff (the guide books too) in her purse for me until we got back home. What a wonderful grandmother, huh? Then I had a drawer that I kept everything neatly stacked in for many years. I have park guides from visits to the park that go all the way back to 1972. I only have one entertainment guide (Easter Week '73) that is all wrinkled for some reason.

Can't thank you enough for these images! My dad and I were there Space Mountain opening day as his company did some of the exterior work on the project and he received a couple passes for the event. It is one of my fondest memories of my dad who passed away 5 years ago. Thanks so much!!

Great memories! I moved out of CA in the fall of '76, so I missed this, although I remember seeing Space Mountain under construction on my last childhood visit that October.

I remember seeing two Disneyland commercials the next year - the only ones I ever saw as a kid (other than the weekly show) - on a St Louis station, and Space Mountain was one of the subjects.

I'm amazed at the shape that PanaVue slide is in! Mine from just a few years later (1984) are all orangey.

Chuck, I have a Space Mt. construction shot that I took from the Skyway during a visit in 1976. I plan to include that in a future post.

I also remember the Space Mt. commercial. Was this the one that you remember, by any chance? (I think there was just the one):

I wonder if this was the beginning of Disney's "false advertising" policy? I'm talking about removing the track from the footage they showed in the commercial. Actually, the visuals in the background are also fake. Unfortunately, I was a little disappointed to see it in person after seeing the commercial. And that actually happened again with other new attractions they opened. I've often wondered if I wouldn't have had that initial disappointment if they didn't "doctor" their commercials.

The other commercial I remember from the era had the carrousel in it. I think I saw each commercial maybe two or three times.

I remember when I rode Space Mountain at WDW in '79 being surprised at being able to dimly see the track and support structures and how it didn't look exactly like you were out in space. I wonder if this commercial influenced that expectation?

Chuck, that commercial definitely influenced my expectations and my initial feelings about the ride when I rode if for the first time. I remember being disappointed that the track was as visible as it was, after seeing the commercial and also after seeing the photo of the ride vehicle "hovering in space" in this magazine article:

As I mentioned in that other post, I do love Space Mountain, but my initial impression of it was a little bit of a let down because of the way they depicted it on film and in still photos.