Well, it's almost 2010. Can you believe it? Weren't we just worrying about the whole Y2K thing and what would happen when the clock struck midnight ten years ago? Ten years ago! WOW! It's all gone by so fast! And I was just reading the cover story in the current issue of TIME magazine about "The Decade From Hell." It's a very interesting article....oh, but I digress. Let's take a look at the Disneyland guide for December 31st, 1999....ten years ago today!

This is back in the day when the park guide, park map, and entertainment schedule were all combined into one flyer. I never saw Animazement or Woody's Roundup, which I now regret. I'm glad to see that they had several New Year's Eve "Countdown Locations." The last New Year's Eve that I spent at Disneyland was in 1996 and it was so unbelievably crowded that I haven't attempted it since. It seemed like the entire park was packed into the Plaza for the midnight countdown and fireworks. Afterward, it was complete gridlock in the Plaza and surrounding areas and it was taking forever for the crowd to dissipate. People got very impatient and eventually just started climbing over railings and trampling flowers to get out of the area. It was a little scary! 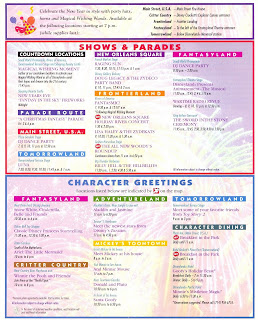 It's interesting that the Haunted Mansion listing doesn't mention it's special holiday overlay, but the listing for It's A Small World does. 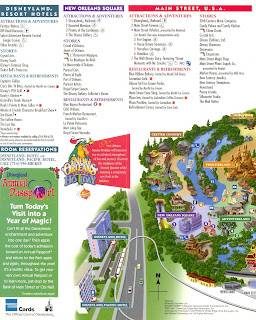 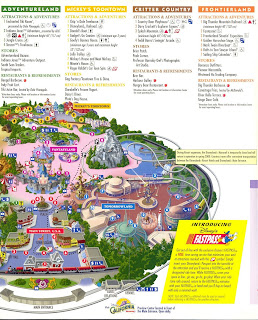 And speaking of It's A Small World, notice how Fastpass was available for it during the holiday season (see below.) Anyone out there have a Fastpass for IASW's holiday overlay? Those must be rare since they haven't issued them for years now! Tokyo Disneyland still sets up temporary Fastpass machines for their holiday version of It's A Small World.
.
Eeeeeew, there's the BROWN Tomorrowland that I dislike so much! How could they have turned my absolute favorite land into my very least favorite? And remember when Cosmic Waves was actually listed as an attraction? Ha!
.
Notice at the bottom of the map that the California Adventure Preview Center is mentioned. I'll just hold my tongue about that park!
.

I was only at the park once for New Year's Eve, and thankfully, I was staying on property. Apparently, drivers in line for the parking lot just abandoned their vehicles and went into the park to see the fireworks. Madness!

Sounds like a nightmare on New Year's Eve at the park, If had nothing to do and was in a sadistic mood I'd check it out, but no thanks!

Cosmic Waves, bah! They ruined my favorite land too and its time to put it back! Seriously, what could it cost to restore the '67 version of Tomorrowland? Less than Carsland that's for sure!

Dave, I think my head would explode it that happened!

Having been to Disneyland and Walt Disney World in the off-season this year and last year, I can safely say I have no desire to visit a Disney Park on a holiday.

I did like how Pleasure Island at WDW used to have New Year's Eve every night.

Years ago when my parents lived in Kentucky, we went to a temporary store in Louisville that just sold closeout Disneyland merchandise. I got a picture frame magnet featuring that "New Tomorrowland" with the green and bronze Space Mountain. What were they thinking?

Ah-ha...that's why! I was thinking the Haunted Mansion Holiday had debuted earlier....thank you anonymous!

i meet a guy 10 years ago at the park .....when it turned midnight the year 2000 h was my first real kiss......i had just turned 16 .....after we left with our family's and went home we never talked to each other until a few months ago i found him on facebook and we only live a few hours away from each other now im going to see him soon ...he might just be my soul mate....

Wow...what a great story, Dana. Thank you for sharing it. And good luck with that guy!

E: I believe I have a Small World Holiday fastpass. I can scan it if you'd like..?

BIWATW, Yes...I would love to see what it looked like! Do you happen to have the older Star Tours FP or the ones for Pirates or Pooh? I believe they had them for all three of those attractions at one point.

We were there! At the end of Main Street probably 30ft from the Christmas tree. Great night, and yes a mad house!

I was there NYE 2000 with some friends. It was a rainy day, so crowds were low. They played Prince's 1999 at the stroke of midnight on Main Steet. It was amazing.

Shuzuluza, I LOVE that Prince song! I remember them playing it at Videopolis the night of Disneyland's 30th anniversary party.....even though the song was already 3 years old by then. That's pretty cool that they played it on New Year's Eve, 1999/2000! Thanks for commenting!