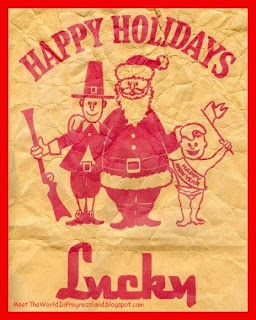 Many years ago, while shopping at a "Lucky's" Grocery Store here in Southern California (hello, Stephanie Edwards!), I stumbled across the ultimate Disney wrapping paper. It features photographs of both Disneyland and Walt Disney World at Christmastime.
. 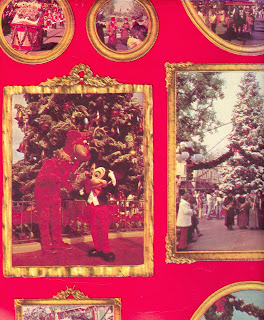 .
Above, we can see one of the "silly" reindeer costumes that were used for many years in the parks. Tokyo Disneyland actually still uses these costumes! I prefer the "silly" version over the ones now used at Disneyland and Walt Disney World. Call me a traditionalist!
. 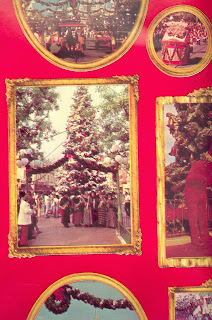 .
The shot of the Christmas tree and Dickens carolers was taken in Disneyland's Town Square.
. 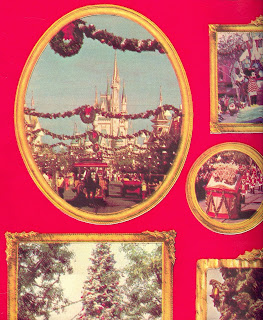 The picture of the Castle and Horse Drawn Streetcar is of course, from Walt Disney World's Magic Kingdom. 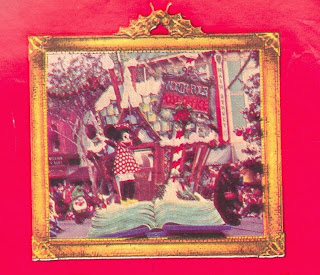 This photo of Minnie was taken at Disneyland. She is standing on the North Pole Post Office float from the Very Merry Christmas Parade. 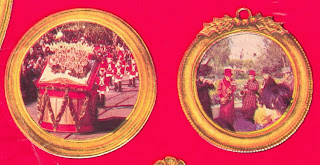 And last but not least...the photo on the left shows the title float for the Very Merry Christmas Parade. The words just above the parade title read, "Walt Disney World." The photo on the right shows musicians playing in front of one of the Tomorrowland entrance planters at Disneyland. It's a little difficult to make out in the scan, but Alpine Gardens and the Matterhorn are behind them.
.
I was a kid when I got this wrapping paper....and I did actually use a small amount of it, but then I tucked the rest of the roll away and have kept it all these years!
Posted by TokyoMagic! at 12:04 AM

That is great! I love the silly version of the reindeer. I may be mistaken, but I think I remember seeing a calendar with white versions of the reindeer, too.

That's awesome!! Glad to see I'm not the only one who holds on to stuff from SO many years ago because it just seemed too important to be thrown away. Great item!!

Cuuute! It's enough to get me into the spirit and watch Sandy Duncan holiday specials.