Today we will be visiting the Main St. Opera House at Disneyland. All of the photos from today's post were taken over the recent Thanksgiving Holiday Weekend.

Notice how The Walt Disney Story/Steve Martin film marquee is now missing from the facade of the Opera House. 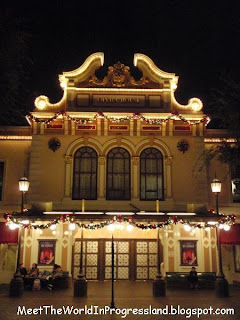 Posters on either side of the doorway announce that Lincoln is coming! 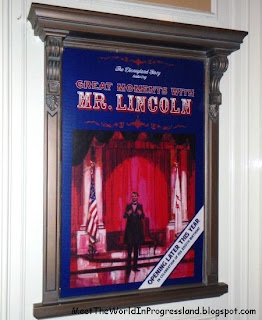 Inside there is more Lincoln artwork. The sign says "Opening Later This Year - In Celebration Of His 200th Birthday," but a cast member informed us that Lincoln would be ready HOPEFULLY by the end of the year.....and if not, then hopefully by February (in time for his 201st birthday.) 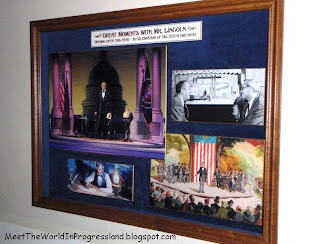 The film, "Disneyland, The First 50 Magical Years" still plays inside, but on a smaller screen. 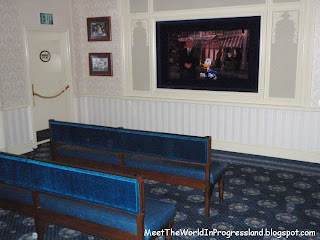 I asked the cast member if he thought this film would ever be released on DVD and he said they get plenty of requests for it and that they do pass that information on to management. I'd buy a copy! 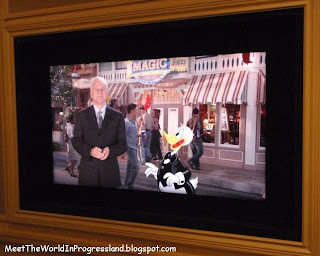 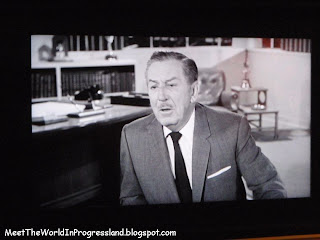 The large glass case in the main room that had previously been covered up, now has a new display. There is a sign above it that reads, "Yesterday, Today And Tomorrow." 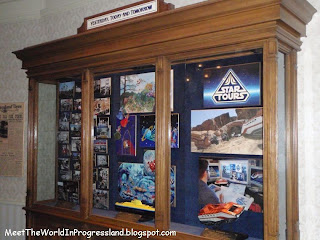 .
Let's work our way backwards here, shall we. First let's look at "Tomorrow." A new Star Tours? That's it??? Why do I find it hard to get excited about this? Maybe it's because we've been hearing about it for years now and it should have happened already! And what about the rest of Tomorrowland.....Honey I Shrunk The Audience, Innoventions, an abandoned PeopleMover track? Need I say more? 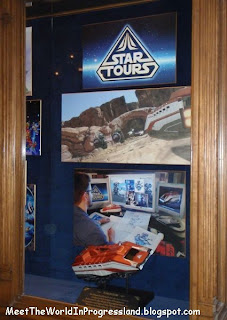 Next we have "Today." Hey, didn't the Pooh ride open like back in 2003? Isn't it now almost 2010? And they want to BRAG about this attraction? Sleeping Beauty Castle walk-through....EXCELLENT!!! And I do enjoy the Finding Nemo Submarine Voyage (maybe not as much as the original subs), but I don't like the way they crammed more seats into the subs. If you're 6 ft. or taller, you better just hope that they don't stick you in one of the new seats that hangs over the bottom of the stairway.....NOT FUN! 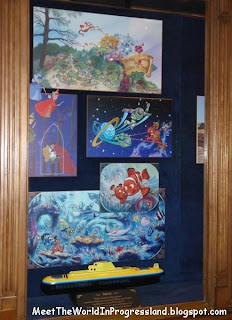 .
Last up, we have "Yesterday." It's very sad looking at these photos and realizing just how many wonderful attractions have been destroyed over the years. The ones that I miss most are The Carousel of Progress, Adventure Thru Inner Space, Country Bear Jamboree, and Nature's Wonderland Mine Train. Which attractions pictured do you miss the most? Oh well, I guess we will have a new Star Tours sometime in the future....and we'll always have the newly painted swings and ferris wheel to ride across the Esplanade. 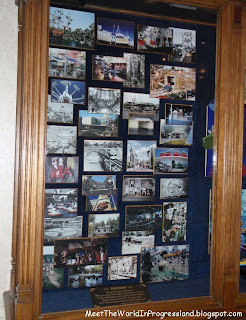 Well, I'm going to end this post with something positive! Here are a couple items that are currently on display in the foyer of the Opera House. 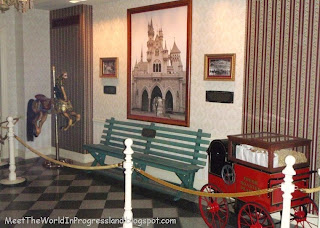 This first one is a bench from Griffith Park and it is THE bench that Walt Disney sat on and dreamed about a place where "parents and children could have fun together" while his daughters were riding the merry-go-round. 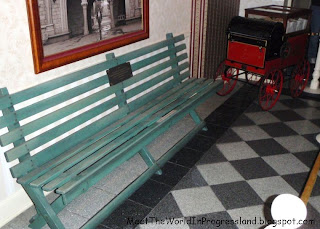 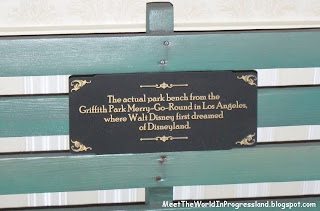 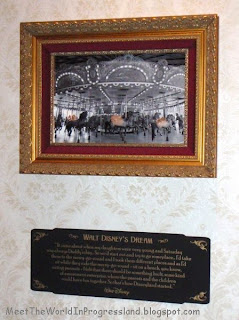 And here is an actual horse from that merry-go-round. It is currently on loan to Disneyland from Griffith Park. 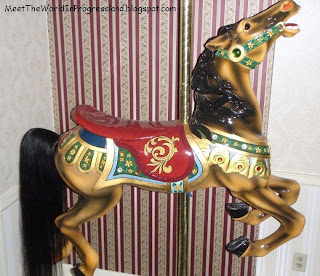 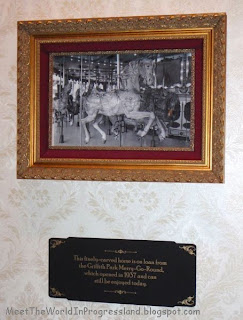 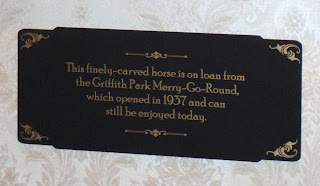 There wasn't a plaque for this peanut cart, so I don't know if it is just there for atmosphere, or if it is the actual cart that Walt bought peanuts from back in the day. It's even filled with bags of peanuts! 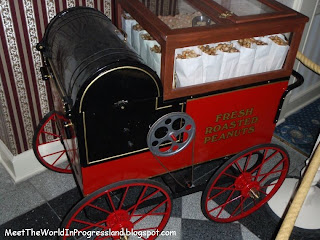 Well, 2010 is almost here and that means the park will soon be celebrating it's 55th birthday. Here's to hoping that there's more in store for Disneyland in the near future than just an updated Star Tours attraction. And here's to a brand new Abraham Lincoln....one that hopefully won't require "surround sound" headphones or 3-D glasses to enjoy!

I am anxiously awaiting the return of Abe as well. I really do like the exhibits in the Opera House. The tilting of the 1955 model is fantastic as it allows more space. Did you see the back of the castle model that has been added to?

Hey Dave. I do like all of the models and artwork on display in the Opera House. I took photos of everything, but I think they have all been posted before either by you or VDT, so I only posted the new display case and the Griffith Park stuff because I didn't remember seeing those items posted anywhere previously.

Oh, and I also like the tilting of the 1955 DL model. I see they finally rotated the Tomorrowland buildings around to their proper positions!

I love visiting the Opera House. My favorite thing there on my last visit was the "Dumbo's Circus" models. I'm not a really big Star Wars fan, but I am looking forward to the changed Star Tours--that model is nice!

Sadly, the Opera house is one of those sections we neglect at Disneyland. It hard to cram in everything you want to when you're only there for one day and see everything the whole family wants to see.

I'm definitely making a point of going there next time! Nice post!

Great post, thanks for the close up looks, this section has been closed on my last few visits.

The Yesterday section is bitter-sweet indeed.

Tilting of the model is much better, almost seems like a different model?

Today 3 cast members confirmed a "tentative" date for Mr. Lincoln on 12-17! One CM said they are just working on the lighting and sound tuning!!

Sound tuning? I hope that doesn't mean sound tuning for the "surround sound" headphones. That last version of Lincoln was horrible and I was always worried that I was going to get lice from the headsets. At least 3-D glasses get washed (supposedly) between each use, but how do you wash headphones? Answer: You don't! I hope they have thrown those in the trash!

I'm glad they mentioned the walk through - we all worked so hard on it!

Chris, I was so glad to see the walk-through reopened and really thought it was an incredible job! I hope you will be working on more future Disneyland projects!

Thanks! I likely will not be back at WDI anytime soon - I'm here working for Universal Studios Singapore for at least the next 9 months! I will be back to promote the Knott's book in March though.