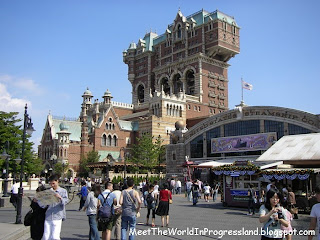 Tokyo DisneySea has the most detailed Tower of Terror out of all the Tower of Terror attractions around the world. Tokyo's theme and backstory are completely different than any of the other versions. This one does not have a Twilight Zone tie-in. Instead, the New York City Preservation Society is supposed to be taking guests on a tour of an old hotel. The hotel's owner, Harrison Hightower had mysteriously disappeared one New Year's Eve when the hotel was struck by lightning and the elevator to his penthouse was sent crashing to the ground. There is more to the hotel owner's backstory that involves him traveling around the world and taking ancient artifacts from other countries. One of these artifacts was a cursed idol by the name of Shiriki Utundu. The idol is a part of the pre-show, which includes some pretty awesome special effects, and it also turns up again on the elevator ride up to the penthouse. After riding all versions of this attraction, I would have to say that this is my favorite both inside and out. 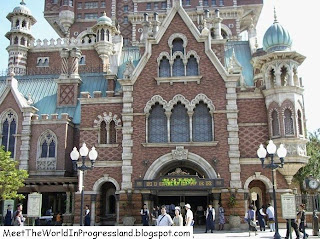 Just take a look at the detail on the exterior. The hotel sign is fiber optic and the part that reads "Tower of Terror" fades in every so often and then fades out. The view below is of the side of the building just after exiting the attraction. 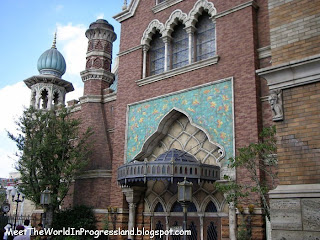 The S.S. Columbia is "docked" just down the street. Also according to the backstory, the owner of the hotel was a huge shipping magnate and owned a steamship line in addition to the hotel. 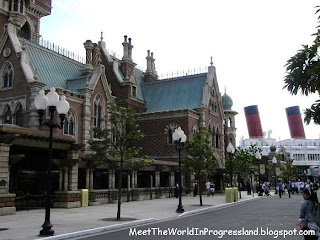