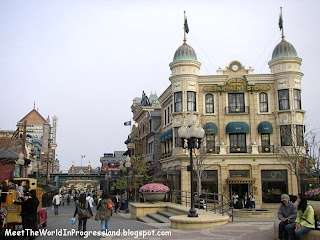 The American Waterfront is the next port we will be visiting in Tokyo DisneySea. This "land" is quite large and features two different themes. The first is a 1920's/1930's New York City theme and the second is a New England fishing village theme. The two areas together are so big, that we will just look at an overview of the New York section today. The building to the right in the photo above is McDuck's Department Store, which is a large "Emporium" type of store. The taller building down the street and on the left is the Broadway Music Theater, where guests can see daily performances of a "Broadway" style musical review. 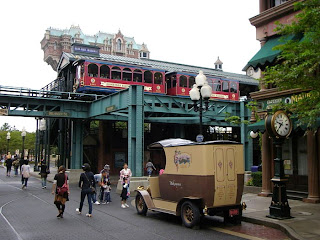 The DisneySea Electric Railway is an elevated railway that takes guests from the American Waterfront area to Port Discovery which is another "land" on the other side of the park. The shot above is of the American Waterfront station (with the Tower of Terror behind it) and the photo below was taken looking down from that station's platform. 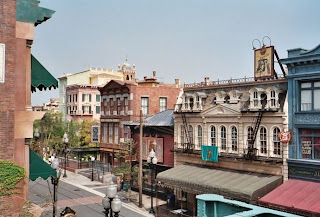 The American Waterfront has it's own steamship, the S.S. Columbia. To me this ship more than just resembles the Queen Mary in Long Beach, California. If you recall, in the early nineties, there was talk of Anaheim's "second gate" being built in Long Beach alongside the Queen Mary because at that time, Disney was leasing and operating the ship's hotel and attractions. This second gate was going to be called "Port Disney" and was going to feature different themed sea ports, a volcano, etc. Disney then decided that rather than build that park in Long Beach, they would build "Westcot" in the old Disneyland parking lot, but ultimately those plans were changed and they decided to build "Six Flags Over Anaheim" instead.

I must say that if Port Disney had been built in Long Beach, I have every confidence in Disney that they would have totally botched it up and that it would not have even come close to resembling Tokyo DisneySea. The Japanese spent 4 billion (in U.S. dollars) on Tokyo DisneySea. Disney spent less than 700 million on California Adventure. I think I have mentioned it before, but Tokyo Disneyland and Tokyo DisneySea are NOT owned by Disney. They are owned by The Oriental Land Co., and I must say once again, that they have surpassed Disney in the quality, themeing, and maintenance departments, which is very sad.

Ahhh, but again I digress.......anyway, the S.S. Columbia steamship is not a real ship, but an incredible simulation (like Beatlemania). It is actually a "building" with water around it (sorry to destroy the illusion). In the photo below, that thin little horizontal strip of water visible just above the concrete wall on the right side of the ship, is actually Tokyo Bay. The illusion of this being a real ship is incredible. From inside the park, it appears that the ship could just back out into the bay at any moment. The ship has two themed restaurants on board as well as a dock that serves as a stage for a show entitled, "Over The Waves". 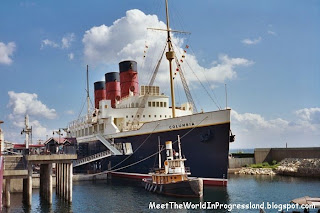