Today, in honor of Walt Disney World's 40th Anniversary, we have another toy from my childhood. It's a Walt Disney World jigsaw puzzle from the good people over at Whitman. There isn't a date on the box, but we can tell by the "Fifty Happy Years" logo that it is from 1973...just two years after The Magic Kingdom opened in Florida. 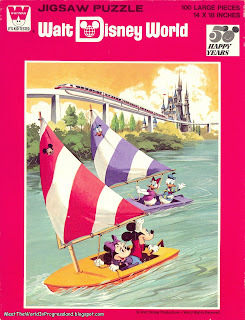 I love merch like this- the characters, beautifully painted, not just waving at the viewer, but engaged in a little story, and experiencing something specific at the parks. I have a Whitman puzzle of Donald, Huey, Dewey, and Louie, on 20,000 Leagues Under the Sea.

50 Happy Years, boy do I remember that slogan! Whitman made some very cool stuff, such as coloring books that are worth having just for the cover illustrations.

So strange, from what I've read, there was not much of a celebration for WDW's 40th. Could it be because, unlike Disneyland, most of the guests are out-of-towners? It's all the locals that wanted to party hardy at Disneyland, after all.

I agree with Eric, the illustration on this puzzle is quite nice. In a whimsical way, the painting really captures the fun and excitement of being at this magical place.

This kind of item reminds me of the kinds of souvenirs I saw on my first time on Walt Disney World property as a little kid in 1981 (I only saw the Disney Village Shopping Center that time). Happy Birthday Walt Disney World!