For Disneyland's 56th birthday today, I'm posting another Disneyland souvenir from my personal collection. Back in February of this year, I posted a similar Tomorrowland postcard book. Well, today's postcard book was sold in the park during Disneyland's 25th Birthday celebration in 1980 and featured photos from the "Family Reunion Parade" (in the Disneyland entertainment programs, it was always listed as "Disneyland's 25th Birthday Parade"). Once again, all the postcards in the book except for the one on the front cover included a mini version of the postcard as well.

This first postcard (actually the back cover of the book) shows part of the "Main Street" unit of the parade. Note how the Horse-drawn Trolley vehicle in the background has been adapted into a parade float. It's also being pulled by two horses instead of one.

Next, we have the Adventureland unit of the parade...... 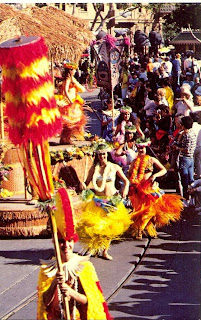 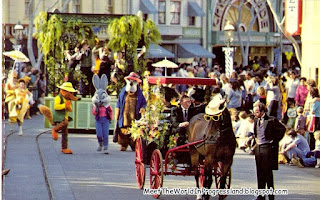 Unfortunately, the book skips over the Bear Country, Frontierland and Tomorrowland units of the parade, but has two postcards representing Fantasyland. 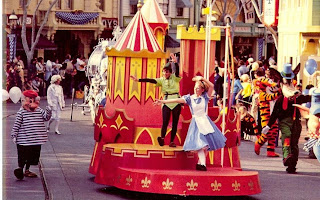 I believe this glass carriage is still around today and used for Disney weddings over at the hotel.....but don't quote me on that. 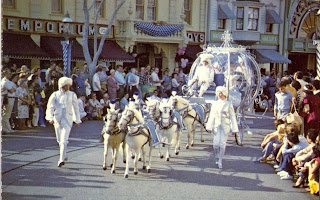 This restored 1907 calliope had been used in Disneyland's opening day parade as well as in the park's Mickey Mouse Club Circus back in 1955. I wonder where it is today? 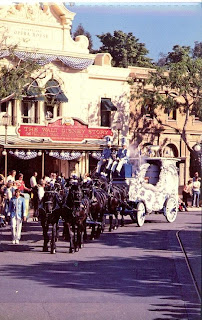 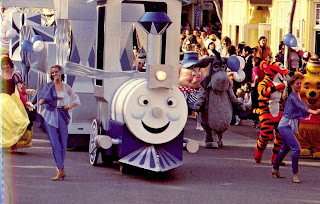 You can watch the entire parade below, in two parts. These were the good old days at Disneyland when the parades had many floats, lots of live musicians, and tons of parade performers. This particular parade also featured quite a few horses...twenty one to be exact. In Part 1, note the Tahitian Terrace hula dancers in the Adventureland unit!

In Part 2, note the "Liverlips McGrowl" and "Terrence" costumed characters from Bear Country and the Golden Horseshoe Can-Can dancers as part of the Frontierland unit. There is also an authentic Stagecoach vehicle from the former Frontierland attraction!

I remember really liking this parade, but I thought they kind of dropped the ball on the Tomorrowland unit.....a Roller Disco future??? How about a mini TWA Rocket or a mini Space Mountain? I did like the giant mirrored letters spelling out Disneyland towards the end of the parade.....and the "Disneyland Is Your Land" song that went along with them. (Incidentally, that song was translated into Japanese and used again three years later for Tokyo Disneyland's first parade in 1983.)

What were they thinking with that Tomorrowland segment? "Forget the rockets and space theme. Lets have Pinocchio, Gideon and Foulfellow host a roller disco competition!"

Hey Dan, I remember that the Brer Rabbit costume wasn't brought out very often, but the Brer Fox and Brer Bear characters were often seen walking around New Orleans Square and sometimes they would even dance with guests to the live music of the Royal St. Bachelors.

"To-MORROW...To-MORROW! Everyone get down and boogie!

There can't be too many other postcard sets dedicated to a parade. But then as soon as I typed that, I remembered that I have a set of "America on Parade" cards. Was there a set for the Electrical Parade?

Major, I didn't know there was a set for America On Parade! Were they in a book like this or in one of those connected fold-out things? I don't think there was a set for the Electrical Parade, but there was a small photo album/booklet for it that I posted a couple years ago. That booklet can be seen here:

That's quite a parade! I wouldn't mind owning that glass carriage myself...although I don't think it would fit in my living room. The ponies in that postcard seem a bit riled up.

TM!, the America on Parade postcards were slightly oversized cards that were sold as a set in a clear plastic sleeve with "America on Parade" printing on it. All of the cards were separate, not bound in a book or a foldout. I have one somewhere, if I find it I'll send you a scan.

This sucks. R I P Walt. You would hate your park.