It's time for Part Two of my "Fowl Stuff At Disneyland" series (to see Part One on the Enchanted Tiki Room's Barker Bird, click here)

Today we're going all the way back to the Spring of 1997, when for a brief time, The Swiss Family Treehouse had live birds perched at it's base. Here, are a couple shots I took 14 years ago. 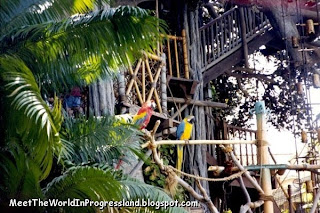 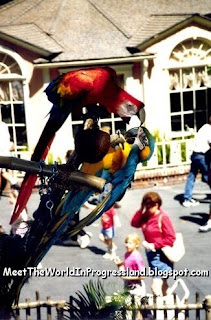 Here's a short video that I shot around the same time. At the very beginning, you can hear a friend of mine say something like "The audio-animatronics are wonderful!" You will also hear a very annoying child making very loud animal noises....those are not coming from the birds! Around the thirty second mark however, the red macaw does attempt to say something.

I'm not sure how long the birds were around. I only remember seeing them during a few visits. Unfortunately, less than two years later, the Swiss Family Treehouse was converted into Tarzan's Treehouse and ugly static figures from "Tarzan" were added. Personally, I think the new attraction overlay would have been more effective without the statues......after all, we didn't need to see the Robinson Family members when we walked through their home. 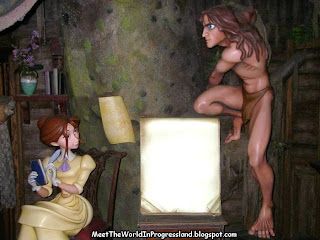 WOW! Great post! I never ever saw those birds!!!

It's too bad the live birds aren't there anymore. They are probably easier to care for than animatronics, and they can live a long time!

I've never seen Disneyland's Treehouse, but not much is being done these days to promote Disney's Tarzan (maybe because it's co-owned with the Burroughs estate?). I wonder if it will switch back to the Swiss Family when Johnny Depp stars in the remake. :-)

I agree that the current treehouse would be better without Tarzan and Jane. In the old version, it was easy to imagine that the Swiss Family had stepped out for a while, and we were nosing around their home.

I had no idea about the birds!

Never knew about the birds either.

Tokyo, you may be one of the few people on the planet to have video footage of them since it sounds like they weren't around very long. I can't image that they were free to roam and fly up into the tree tops, but I don't seem to see any kind of tether on their perch. Wonder if they had their flight feathers trimmed?

Late here too but just now had the time to read this awesome and detailed post in its entirety. Your brother did a decent job, fun perspective. I can't believe you saved all this stuff, well, yes I can :-)