In my last post , I included photos of some figures from EPCOT's World of Motion attraction that found their way to both Disneyland and Disney's California Adventure. Let's take another look at those figures as well as some of the others that made the long trek from Orlando to Anaheim. 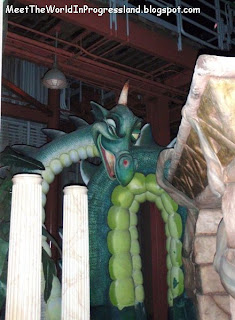 Here again, is the sea serpent from World of Motion's "Christopher Columbus scene." .
He is surrounded by other props in the Hollywood Backlot area. With the upcoming changes planned for DCA, I wonder if these items will be staying? 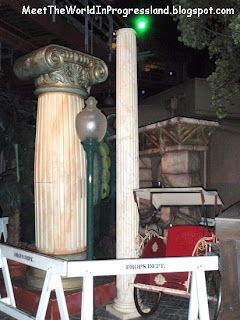 I've been reviewing old attraction footage trying to figure out if these other props are from WOM as well. I haven't come to a definitive conclusion yet. Maybe I need to see some better footage! 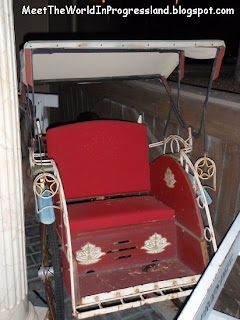 Here are the pirate, the horse and the goat from Pirates of the Caribbean that were mentioned in my last post. All three of these figures were originally from WOM. I wonder where they are now? 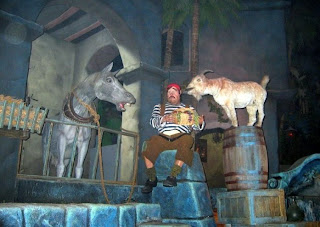 And just a few feet to the right of these figures, was a pig from WOM that used to sit next to the "gluttonous pirate" in the chase scene. Notice the pirate's belly sticking out under his sash...that was a 1997 addition. Thank goodness they covered it back up when Jack Sparrow was added to the attraction in 2006. And that cat that used to rise up on a platform from inside the barrel was just plain ridiculous! 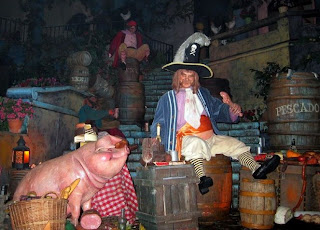 Here's the partner of the pirate that was seen pulling on the rope in my last post. (He can also be seen in the background of this photo.) This squatting figure was originally from the Assyrian scene in WOM, where he was attempting to get a seated Zebra to stand up. 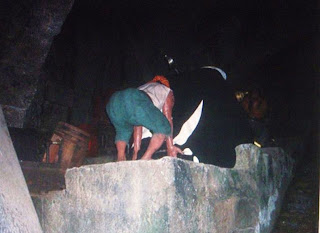 .
I hope everyone enjoyed this peek at some old EPCOT remnants. My next post is going to be another vintage trip report from Disneyland in the 1980's. Get your time machines ready!
Posted by TokyoMagic! at 7:24 PM

Excellent follow-up; that's amazing that you found photos of the old POTC stuff - I am envious!