Once upon a time in EPCOT, there was an attraction called World of Motion. It was housed in a large wheel shaped building and was a 15 minute Omnimover ride through the largest assembly of Audio-Animatronics ever produced in Disney history....188 figures in total.
. 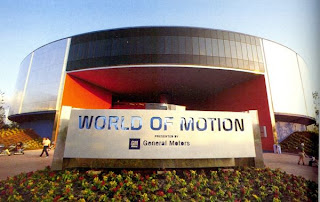 The attraction was similar to Spaceship Earth, but instead of tracing man's achievements in communication, World of Motion traced the development of transportation from man's earliest forms of mobility, up to present times (and even hinted at some possible future methods.) 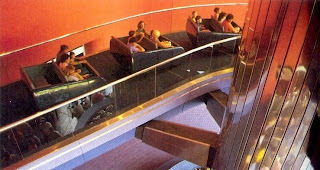 Another difference between this attraction and Spaceship Earth was that most of the scenes in World of Motion were infused with humor. Here's one of the scenes from the attraction showing an encounter between Christopher Columbus and a sea serpent during his search for the New World. 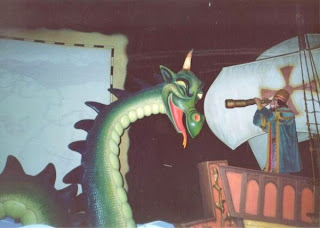 Unfortunately, after entertaining guests for 14 years, World of Motion closed in 1996 and was eventually replaced by Test Track. So what happened to all those set pieces and figures? Well, a small number of them went on to have a life after WOM. The sea serpent from the Christopher Columbus scene can actually be found today in Anaheim, at Disney's California Adventure. I'm wondering how many people right now are saying, "Where in the heck?" Well, he is hidden behind the buildings on the north side of the Hollywood Backlot, just next to the Hollywood Backlot Stage. He's surrounded by some wooden barriers that have "Props Dept." stenciled on them, as well as a few other props such as some Roman columns and a Chinese rickshaw. I haven't yet been able to confirm whether or not these are also from World of Motion, but I would tend to believe that they are. Maybe someone out there can say for sure.
.
Here's the sea serpent in his new home.
. 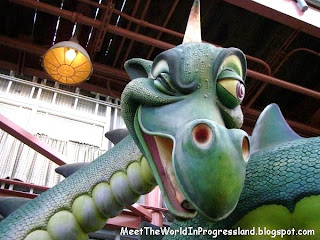 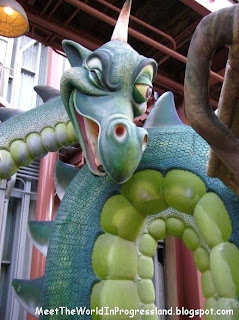 Now let's go back to EPCOT. Does this figure from World of Motion look familiar? He should. He resided in Disneyland's Pirates of the Caribbean from 1997 to 2006. He was one of the two pirates right before the chain lift that were trying to make off with a heavy load of treasure. 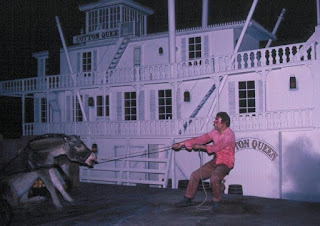 Below, is a photo from Daveland (used here with permission) showing how this figure appeared at Disneyland. His partner that was bent over in a rather unflattering position while trying to help lift the load, was also from World of Motion. 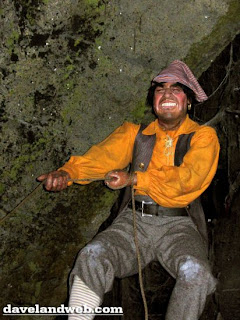 There were other figures that were taken from World of Motion and installed in Pirates of the Caribbean during it's 1997 redo, but I need to find some photos of them in order to show the comparisons. These figures included the pirate from the "chase scene" that was trying to keep a basket of fruit away from a horse and a goat (both from WOM as well) and the pig that used to sit next to "the pooped pirate/gluttonous pirate" in that same scene. If anyone has photos of any of these World of Motion figures from either Orlando or Anaheim and would like to share them, please let me know!
.
***Post Update*** Click here for my next post: More EPCOT In Anaheim to see more figures from WOM that ended up in Anaheim's Pirates of the Caribbean.

That is some great Theme Parkeology...

Amazing find!!! Great post, I love the Anaheim - Epcot Connection! I think I have an actual reason to visit DCA.

Good catch. That's an area of DCA with little to offer. Thanks for the heads up.

Excellent job! I always regretted not taking more photos of those last pirates before Jack Sparrow had them ousted!

I miss that ride. The last time I went on it in 94 or 95, there was hardly anyone there. Noticed Imagination was like that too when we went in August =^(

Interesting! I hope I can see the dragon for myself very soon!