Twenty years ago today, Knott's Berry Farm threw an employee farewell party for the Corkscrew. Commemorative buttons were handed out and employees were given a chance to ride the attraction one last time. 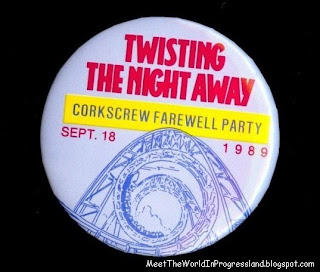 Built by Arrow Dynamics, the Corkscrew opened at Knott's in 1975 and was the first modern inverting roller coaster in the U.S. There actually used to be a recorded welcome announcement in the queue stating this historical fact.

Here are three vintage Corkscrew postcards. The first one shows what it looked like when it first opened....the track and the supports were all painted white. Notice also that there is no Sky Jump parachute tower in the background. That came one year later when the Airfield area was added to the Roaring Twenties section of the park. I can't remember exactly when the Corkscrew's track was painted blue, but I believe it was shortly after the Airfield opened. 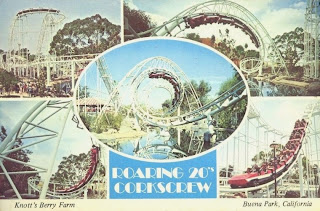 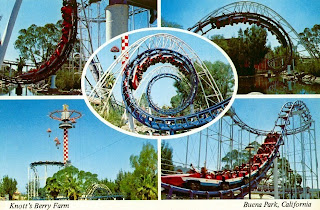 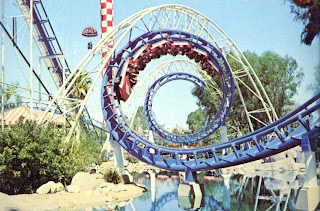 .
After the Corkscrew closed in 1989, it was packed up and shipped to Silverwood Theme Park in Idaho where it opened in 1990 and still operates to this day. The Silverwood website even explains the history and origin of this historical attraction. Below, is a photo of the Corkscrew at Silverwood.
. 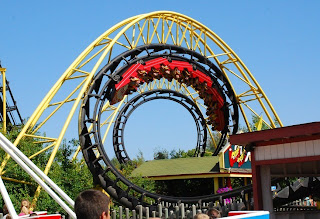 The closing of the Corkscrew came as a surprise to me. Why wouldn't Knott's have wanted to keep this little part of U.S. theme park history? They replaced it with "Boomerang" which isn't any longer in length (935 ft. of track compared to the Corkscrew's 1,250 ft.) Of course Boomerang goes backwards, but Knott's already had a coaster that did this....Montezooma's Revenge. It didn't make sense!
As a side note....I have not been to Silverwood Theme Park to ride the Corkscrew in it's new home, but several years ago, I visited Busch Gardens in Tampa, Florida and they had a roller coaster called The Python which was identical to the Corkscrew. The Python had opened in 1976 and was the park's first roller coaster and Florida's first inverting roller coaster. Unfortunately, The Python was removed from Busch Gardens in 2006. :-(
. 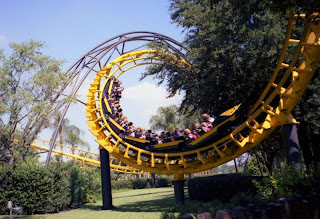 I rode this in July of 1976. I wouldn't ride roller coasters before this but since this was the only inverted roller coaster in the world I thought I would never get the chance to ride again (we were on vacation from Rochester, NY)so I went on and loved it so much I rode 6 more times. As I remember there were no lines at all. Maybe people were afraid it would be too much for them.

It is funny thinking back that I thought I would never have another chance to ride an inverted coaster. Now almost every park has at least 2.

I agree with Randy, back when it was new there wasn't much of a line, I rode it in '76 too (at age 11) It looked really scary, but was fun as could be, I rode it a few times that day!

I'm glad its still running (although I wish it was still at Knotts) and that its place in history is noted.

I rode it on opening day and remember the line being fairly lengthy. It was quite a unique attraction at the time - and a lot of folks were plenty scared of it. Imagine, going upside down!

I rode the Knott's Corkscrew in 1975, I remember as a 12 yr old kid, my head banging around in the shoulder restraint, but loads of fun.... Good times...

I rode this at Knotts as a kid, and now live near Silverwood and have rode it there as well! Its still great!

I loved this at Knotts, Montezuma's Revenge and the Corkscrew made a trip to Knotts at least once a year a must... And 15 year old me was not happy to trade the Corkscrew for the Boomerang.

Anonymous, I was also NOT happy, about the trading of Boomerang for the Corkscrew!