Today, we are at Disneyland in Anaheim. Walt Disney once said that Disneyland would never be completed....and to this day, the company strives to uphold this wish. Yes, Disneyland is always changing and growing, and it only seems to get better and better. Since I had not been to the park for quite some time, I figured it was time to grab my camera and head on over there to check things out. Here are some of the recent changes that had been made to the park, as well as some of the future projects that were under construction. 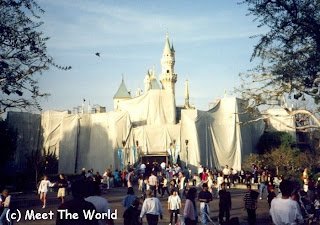 Since Fantasyland had not undergone any kind of major renovation since 1983, I guess it was time to update it and give it a fresh new look. After the success of the Sleeping Beauty Castle walk-thru, the company has decided that there will be many more "walk-thru" type attractions in the future. Of course, we know that these also cost much less to build than an actual "ride." The first entirely new attraction of this type to open, is the Three Little Pigs walk-thru. Management however, decided to use only one of the pigs in this attraction, citing that it would be too costly to include the other two. They have chosen Practical Pig and designed the show building to resemble his house made of bricks. Note the Big Bad Wolf on the roof in the photo below. 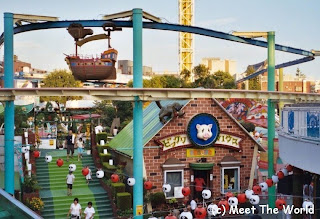 Overhead is the new Peter Pan's Flight. The company also decided that it was too costly to keep up with the interior and exterior maintenance of this aging dark ride, so they eliminated all of the interior sets.....and removed the exterior walls too! They figured that this will also satisfy all of the fans that complain about missing the Skyway attraction. Now once again, guests can get a bird's eye view of Fantasyland.....as well as Tomorrowland! The attraction has been extended in length and renamed Peter Pan's Flight to Tomorrowland...unless you board it in Tomorrowland and then it is called Peter Pan's Flight to Fantasyland. Of course, these are both "one way" trips only. And management will no longer have to worry about people being able to see the rooftops of the Fantasyland darkrides, because eventually all of their rooftops will be removed.... along with their walls too! 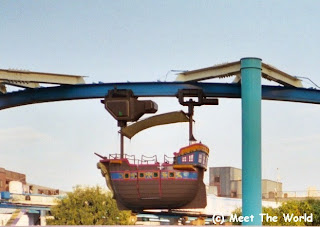 Disney recently announced that Walt Disney World's Hall of Presidents attraction will be permanently closing due to the high cost of staffing and maintaining it. Unfortunately the new Barrack Obama figure had already been completed and was just about to be installed when this announcement was made. Fortunately for Disneyland however, the figure has been sent to Anaheim along with the other 43 presidential audio-animatronic figures, where they are now being installed in pairs, at the bow of each Peter Pan ride vehicle. The photo below shows the first completed vehicle featuring both Obama and former president Bush. Of course these figures will no longer be audio-animatronic. They are the first of a new generation of figures called non-audio-statics. 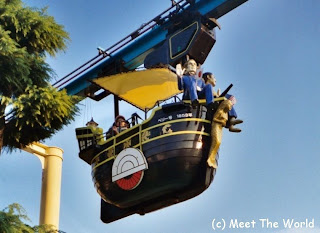 Last up for today, is a shot of the newly extended Peter Pan attraction going over the redesigned Tomorrowland Autopia. In the background is the "Matterhorn Lofts" construction. It seems that Disney has never been happy about the exorbitant cost of maintaining the Matterhorn attraction. That, coupled with the recent success of the Disney Dream Suite, led management to ask themselves why they should allow only a select few to spend the night inside the park and most importantly, why they should let them do it for free. So they came up with the idea of converting the Matterhorn into lofts and letting guests pay for the privilege of spending the night in the park. It's a brilliant marketing idea, really. 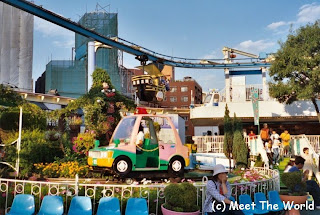 Well, that's it for this trip report. Who knows what you'll find on YOUR next visit to the park. I hear they have plans for replacing the Haunted Mansion with a 3-D movie about a Haunted Manison. Sounds like fun!
.
Happy April Fool's Day everyone!
Posted by TokyoMagic! at 12:04 AM

LOL, that was a fun post. I was fooled by the "Peter Pan's Flight" pics and thought I was going nuts! Great job!

That's neat! I've never been to Disneyland, but I've always wanted to go.. Just never got the chance. Hopefully some day.
=)

Hi Her Movies. Sorry....I just now went back and put "Happy April Fool's Day" at the end of this post. I guess if you have never been before, then it would be easy to mistake these photos for DL...especially when I'm saying that they were taken at DL. Only the first photo was actually taken at the park. Sorry again!