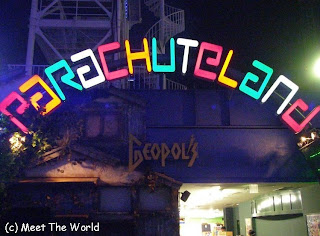 Or is it one word....Parachuteland? It's shown each way on two different signs. This magical land can be found at Tokyo Dome City in Tokyo, Japan. Located next door to the Tokyo Dome sports arena, this amusement area was founded in 1955 and consists of three sections or "lands", Parachute Land, Tower Land, and LaQua. 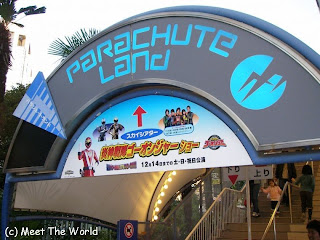 .
Parachute Land does indeed contain a parachute ride and it's called the Sky Flower. This attraction was made by Intamin AG, the same company that made Knott's Sky Jump tower, as well as several parachute towers for other amusement parks across the U.S. 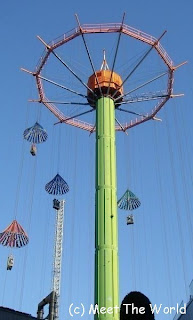 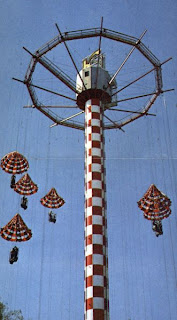 Riding in these baskets gave me a major flashback to my childhood visits to Knott's. It also took me back to a time when I worked at the park. On the Sky Flower, you are taken up and dropped twice....just as in the old days at Knott's. (Knott's changed this at one point and only took guests up once.) 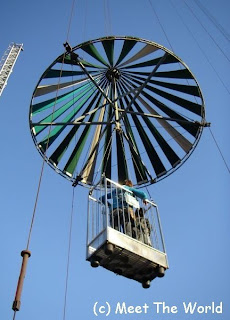 This is the view from the top during the day. 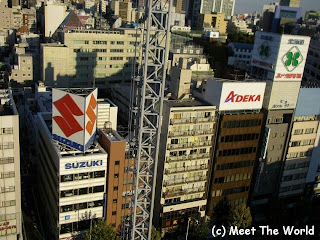 And this is the view looking down on the Tokyo Dome sports arena at night. 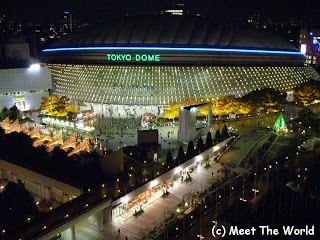 Parachute Land also has it's own "PeopleMover" attraction called the "Sky Trip," and it's just like Disneyland's used to be....except the vehicles are different colors...and the cars only hold two people....oh, and you have to power them yourself by peddling! Other than that, they are JUST like the old PeopleMover. The next photo shows a Sky Trip car leaving the station. That's a hotel rising up in the background. It kind of gives the park a "Disney's California Adventure" feel to it.....but not in a good way. 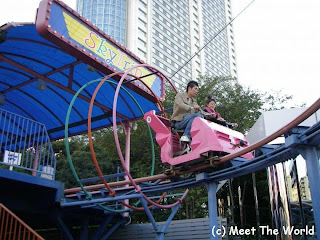 Here is a blue and a pink car going around the base of the parachute tower. 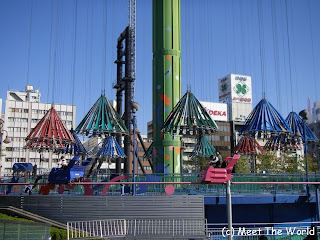 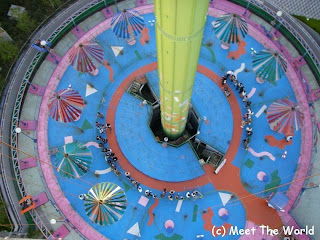 I hope everyone enjoyed this visit to Parachute Land! I will try to do a post on the other two "lands" of Tokyo Dome City in the future, but I probably won't be blogging for a little while now, because I am leaving in just a few days for Tokyo. On April 15th, Tokyo Disneyland will be celebrating it's 26th anniversary with the opening of their new Monsters Inc. Ride and Go Seek attraction. I hope to bring back lots of new photos to share!
Posted by TokyoMagic! at 12:04 AM

Parachute Land should be one word "ParachuteLand".... I didn't know there were any of these Intamin AG Parachute Drops left in service. As you describe that is "drops twice" I too get flashbacks, cold sweats and basic fear of dying! It looks to be in great shape, do you know how old it is? A pedal yourself PeopleMover? More like PeoplePower Mover!

Have a super & safe trip to Tokyo, how fun you'll be there for the 26th anniversary, take lots of picture and have a blast!

p.s. Thanks for the nice words about my blog!

Hey VDT! I'm not sure how old the Sky Flower is. Of all the Intamin AG parachute drops that were built, I could only find one other one that is still standing and operating as a parachute drop. Here is a link to that tower which is now in New Jersey. It has quite a history, including two different homes and three different names!

Thank you for the "well wishes" on my trip!