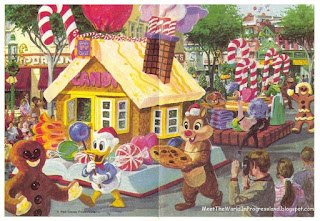 This is Part 2 of a follow up to my "I Was A Teenage Christmas Tree" post from December of 2010. To see Part 1 (from last month), which included the first half of Disneyland's "Fantasy On Parade" from 1981, click here.

The second half of the parade was made up of the "Christmas Finale" units and began with the Toy Soldier Band and Drill Team (from the Disney film, Babes In Toyland). 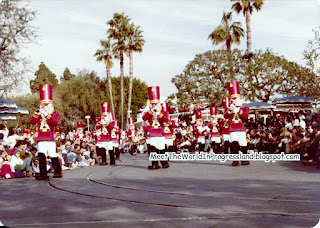 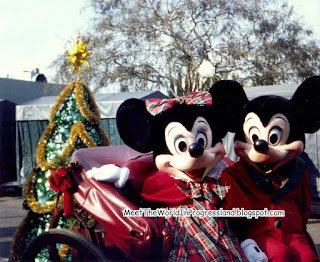 Mickey and Minnie were followed by Donald Duck standing on the Post Office float. It's barely visible, but there is a bag of "U.S. Mail" slung over his back. 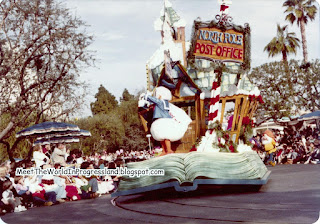 Here's a shot of the Post Office float backstage, with the Seven Dwarfs posing next to it. 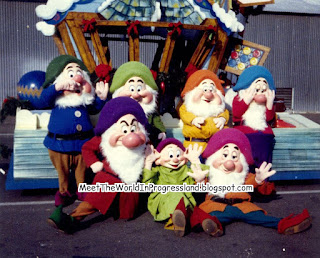 The second part of the Post Office float included stacks of over-sized letters to Santa, with Snow White sitting at a table adding names to "Santa's List". The Seven Dwarfs and the Wicked Witch walked alongside this float. 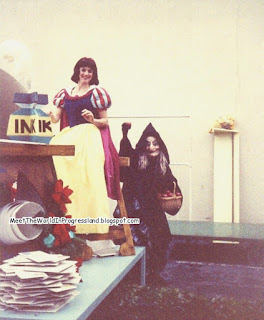 This shot shows several floats parked backstage behind Main St. with Space Mt. towering in the background. The floats visible are, the front part of the Post Office float (on the right) with Dumbo's Firehouse behind it, and the rear part of the Post Office float (on the left), with the Mary Poppins Rooftop float behind it. A "headless" Winnie the Pooh can be seen between those two floats and in the foreground, a couple Reindeer heads are visible (in the shadows) on special stands that are designed to hold the character heads when they are not in use.

Incidentally, the brown building in front of Space Mt. was called The Center and was an employee break area and activity facility. I believe the portable building is still there today, but I'm not sure if it serves the same purpose. 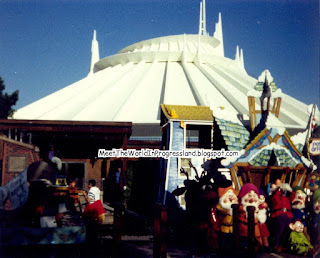 Following the Post Office float, was the Candy Shop float. Mrs. Claus rode on this float. She can be seen here along with Chip and Dale ("Bea," who played "Dale" on the far left) and Winnie the Pooh (Hi Alan!). 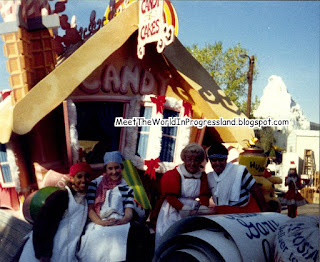 Chip and Dale wore aprons and chefs hats and rode on the back of the Candy Shop float. They would get in a fight and throw flour at each other during the parade. Needless to say, their costumes had to be cleaned after every parade! And speaking of cleaning, the Snowman posing in this picture ("Barry" or "Rene," is that you?) has a big dirt spot on the front of his costume! The Snow People would occasionally fall down during the parade because their vision was pretty restricted (they would see out through the ribbon around their hats). I believe the building behind Chip and Dale would have been the Adventure Thru Inner Space show building. 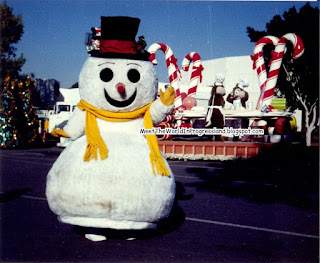 Here's a "headless" Minnie Mouse ("Bernie"), posing backstage next to the Candy Shop Float. The Disneyland train and monorail roundhouse can be seen in the distance and the building on the far right is the backside of the It's A Small World show building. Several headless Dwarfs are also in the background. 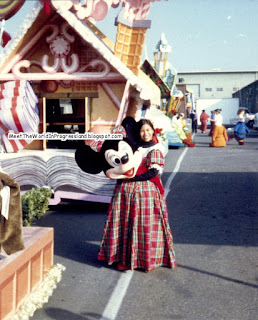 This shot shows a headless Minnie Mouse again, as well as a headless AND "bottomless" Donald Duck ("Mary"). 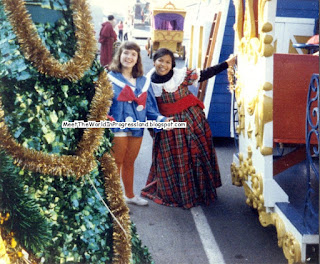 Here's a better shot of the back of the Post Office float. Dopey and one of the other Dwarfs are on the far right, sans their heads. Winnie the Pooh is hanging out with Mrs. Claus (his head can be seen sitting on the Candy Shop float. In the distance is Santa's float. 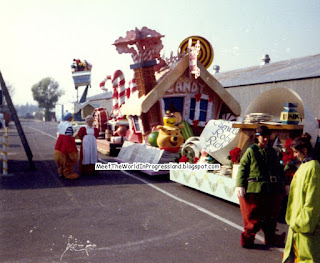 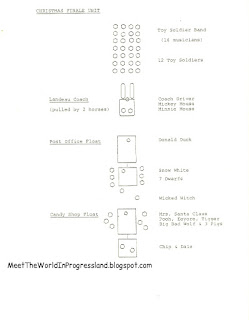 Finally, we get to my section of the Christmas Finale unit, the Christmas Trees and Snow People! Here, the Snow People are posing in front of Santa's float. Santa had already climbed up a ladder to his sleigh. I usually do a better job of composing a picture, so it's really a shame that I cut him off here. It had just rained and the ground is still wet, so this might actually be how that Snowman got the stain on the front of his costume! 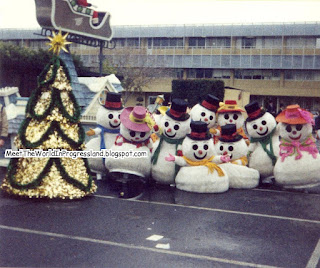 There were eight Christmas Trees altogether. My tree was the green one on the right. 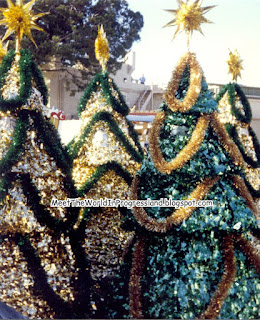 This is how we got inside the trees. The top halves were on springs which enabled us to make the trees "sway" back and forth during the parade. 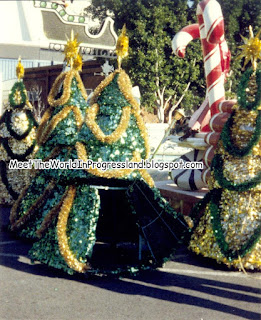 In my post from December of 2010, I included some daytime and nighttime shots of the Christmas Trees and Snow People out on the parade route. This is a shot I took the following year during the 1982 version of Fantasy On Parade. 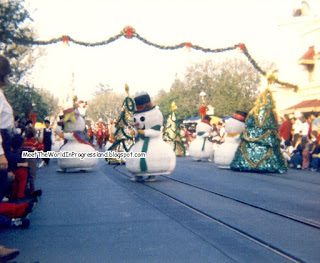 Santa and his Reindeer followed behind the Christmas Trees and Snow People. I'm counting eight reindeer here, so I think that ear that we can see cut off on the far right belongs to "Rudolph". 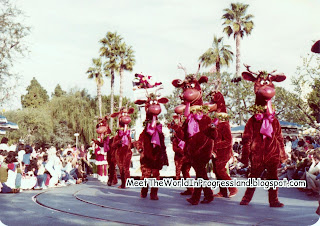 And here is another shot from the 1982 parade. The "Glock Girls" can be seen walking alongside Santa's float, playing their glockenspiels. I'll say it again, they just don't do parades like this anymore! 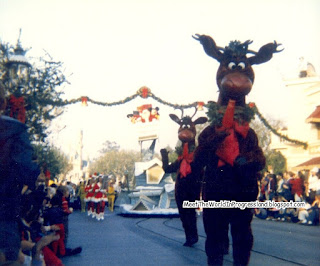 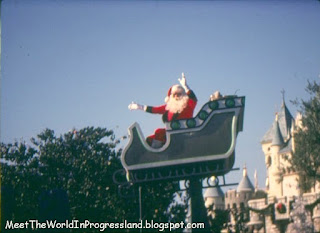 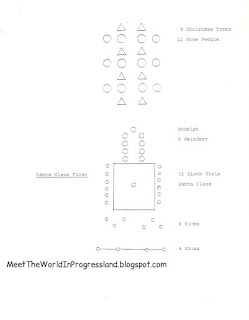 Included with the bundle of parade schematics, was some orientation information: 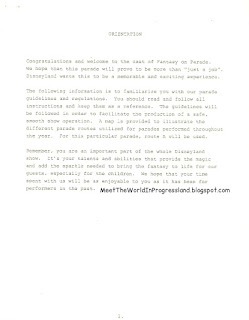 A map of the parade route: 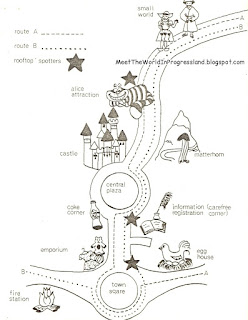 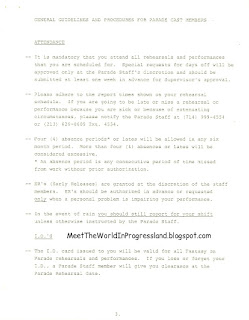 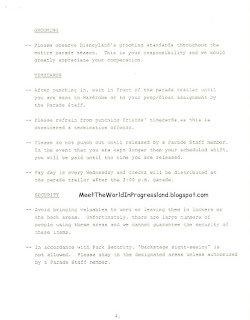 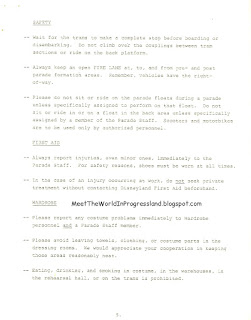 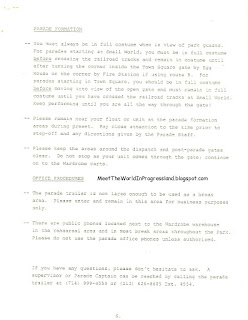 Here again, is that home movie footage of the parade from 1981:

I hope everyone enjoyed this two-part trip back to Christmas '81 at Disneyland!

WOW!!! This two-part "Fantasy On Parade" post has been Supercalifragilisticexpialidocious. I had to look that up to spell it.

The Toy Solider sequence is so classic, right along with the snow people and reindeer sequences.

Those humorous reindeer were my favorite part of the parade and I was so disappointed when they replaced them with the newer versions which have no personality. They ruin everything.

I can see the U.S Mail bag, but it does blend in with Donald's duck-butt. I wouldn't have spotted it without you pointing it out though.

I always wondered how cast members got into those Christmas trees and how they worked motion-wise. In addition, those "headless" character pics are quite illusion shattering, but it is fascinating to see the human body proportions within the context of the costumed character bodies. Without their costume heads the human heads look shrunken on those oversized "cartoon" bodies.

Again, I love the parade schematics along with orientation information. I don't know why, but the "American Egg House" and "Fire Station" icons cracked me up.

Thanks for posting this two-parter. "Fantasy On Parade" is truly a missed classic. I consider it iconic like "America On Parade" and "Main Street Electrical Parade".

Ken, Thanks! I'm glad that you liked these two posts. I don't like the newer reindeer either. I guess it has already been about 15 years since they replaced the "Silly" reindeer with the more serious-looking ones. You are right, they do ruin everything! Tokyo Disneyland also replaced the reindeer in their Christmas parade, but they bring out the "Silly" reindeer for an impromptu appearance in the park in the middle of the day. So basically they use both versions of the reindeer.

That fire station icon is kind of odd. Instead of drawing an actual fire with flames, couldn't they have used a fire hydrant or a fire truck?

I agree with you about this parade being a true classic and ranking right up there with the "Main Street Electrical Parade" and "America On Parade." I'll say it one more time.....they just don't do parades like this anymore! (But Tokyo Disneyland still does!)

I was going to say “Wow!” too, but I don’t want to infringe on Ken Martinez’s copyright. So I will just say, “Well done, old bean”. All of those behind the scenes photos are awesome. And rare. Donald Duck was a girl, who knew? Did she get angry a lot, like Donald? She looks much too nice for that. “Guidelines and Procedures” - TokyoMagic don’t need no stinkin’ guidelines! He does what he wants to do! It looks like being in this parade was pretty fun. I forget, did you ever do other stuff at the park as well?

Yeah, Major! Don't infringe on my copyrights. You know how I get when you do that. ;-)

Major and Ken, Yes Donald Duck was played by a female and she was quite nice. I actually hung out with her and a fellow "tree" during much of the parade downtime. Incidentally, Mickey Mouse was also played by a female that year, as well as Chip and Dale, Pinocchio, Jimney Cricket, Robin Hood, and all of the Seven Dwarfs. However, I don't think there were/are set rules for casting the parts. I know Mickey and Donald have been played by males as well. By the way, the Queen of Hearts (who was seen in Part 1) was actually played by a guy who was over 6 ft. tall.

Major, I started working at Knott's three months after this Christmas/Seasonal job at DL ended. I did go back and audition for the Main St. Electrical Parade about a year later. I wrote about that in my original "I Was A Teenage Christmas Tree" post. Here is what I wrote about it:

"I did actually go back for the Main Street Electrical Parade auditions a year later and was hired by Disney a second time. By this time, I had already gotten a job at Knott's Berry Farm, which was more hours and better pay than working in parades at Disneyland. I somehow thought if I got hired for the Electrical Parade, I would ask Knott's if I could just work daytime shifts and then I would go over to DL to work nights in the Electrical Parade. Well, what I didn't know was that they were also casting at the same time for the new "American Gazette" parade which was a daytime parade. I ended up being hired for that parade and was too young and too afraid to ask for a part in the Electrical Parade instead. So I chose to keep the job with the better pay and hours at Knott's and called Disney a few days later to tell them I couldn't take the part....even though I hated doing it!"

What a great piece of history you've provided here in these two posts-! Just fascinating looking-back at what-was, not to mention all the "behind-the-scenes" 'goodies'.

Many Disney fans have their own memories from many parades, but only a select few experienced these memories, firsthand.

Thanks so much for sharing them.

Nanook, thank you! I'm glad you enjoyed these posts! I had been holding onto these for a while and decided it was time to share them.

P.S. (Nanook) I did have a third post back in "December of 2010" in which I posted some other cast member-only items from the this parade.

This is really cool and interesting, thanks for posting TM!

JG, I'm glad you enjoyed both "parts" of my parade posts! Thanks for checking them out!

@TM, ashamed to admit I don't always remember to look over here. It is a fun blog and I envy your experiences working at the parks. I've always wanted to do that, but never did anything to make it happen.

JG, thanks for the kind words! I appreciate you checking out my blog. As a "general" rule, I try to post at least once a month!

@TM, thanks for the tip, I will make a point to look over more frequently.

I enjoy the exchanges with the "regulars", it often makes my day to hear other people interested in the obscure things I like.

Funny how small Dopey's head looks. Even if he had a beard, seems like it would not be as gigantic as the others. Glad to see the Old Witch included. Great behind the scenes shots TM!