This is Part 2 of my Disneyland's King Arthur Carrousel posts. For Part 1, Click Here.

Today, we will be looking at the relocation of King Arthur Carrousel as well as some "New Fantasyland" construction. These first three photos show the "holes" in the ground that were left after the removal of The Mad Tea Party and Dumbo's Flying Elephants attractions from their original locations in 1982. Note the Big Thunder Trail from Frontierland to Fantasyland in the distance. It was closed to guests at this time. 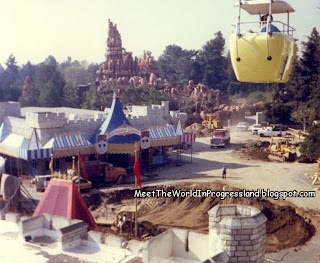 These photos were taken from the Skyway, which at the time, due to construction, was a "round trip" ride only. During this time, guests could only board the Skyway in Tomorrowland and were not allowed to disembark when they got to Fantasyland. Instead, as the vehicles arrived at the Fantasyland Skyway station, they were greeted by cast members that pushed them through the station and back onto the cable to be sent back over to Tomorrowland. 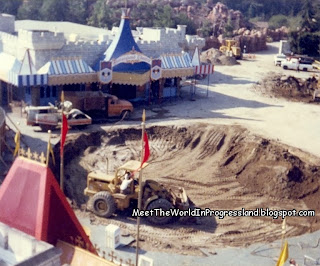 Mr. Toad's Wild Ride was temporarily closed during this preliminary construction period, but would later reopen for a short time before being shut down once again for it's New Fantasyland rehab. Peter Pan's Flight continued to operate at this time, but Snow White's Adventures had already closed for it's rehab and The Fantasyland Theater had closed permanently to be replaced by Pinocchio's Daring Journey. 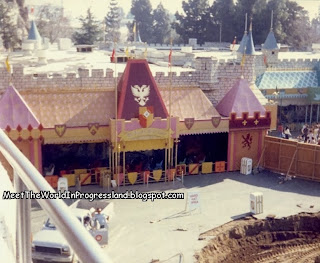 From this angle we get a better view of Dumbo's former location which was eventually replaced in part by the Village Inn (later Village Haus) restaurant. King Arthur Carrousel can be seen beyond the construction wall in the distance. It was still operating in it's original location. 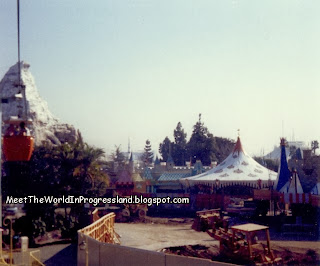 Now in this next shot, the Carrousel has been moved and the spot where it had originally sat has been paved over. 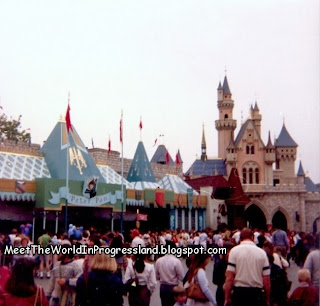 The Snow White attraction was gutted leaving only it's roof and two walls. The Fantasyland Theater was completely bulldozed. What we cannot see in this photo is that the Carrousel has been moved to the former location of the Mad Tea Party and is just out of frame on the right.  Note the camera mounted on the roof to record the construction progress in these next two photos. 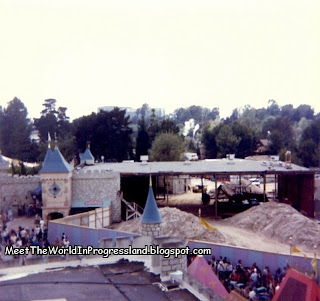 The sign on the construction wall reads, "Wish Upon A Brighter Star - A New Fantasyland Coming True in 1983.  This version of the sign did not remain for very long.  It was replaced by a much more colorful and detailed sign which can be seen here over at Gorillas Don't Blog. 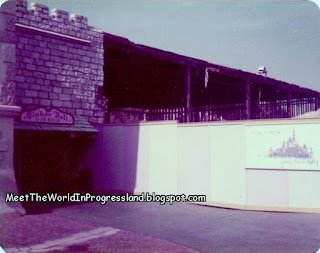 And here we see just a corner of the relocated Carrousel on the far left.  We can also see what looks like a basement for what will become Pinocchio's Daring Journey. 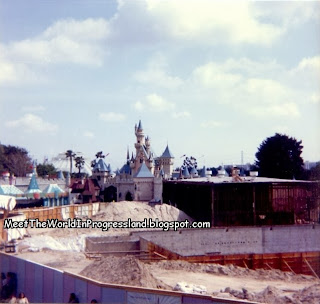 This view was taken from the upper deck of Captain Hook's Pirate Ship. 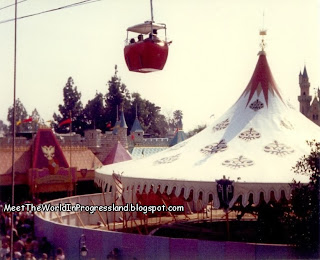 And this was taken through a peep hole in the construction wall surrounding the Carrousel.  The view is looking west towards what's left of the original Snow White attraction. 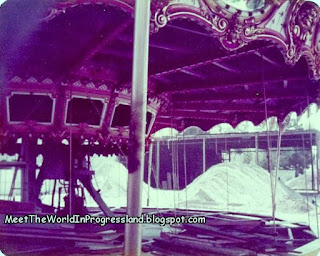 The Los Angeles Times ran this photo in early 1982.  There was no accompanying article, just the caption beneath it, which mentions a reopening date of April 1st. 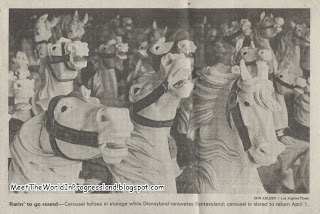 Here, we see three Disneyland icons that would not coexist in this close proximity for very long....Captain Hook's Pirate Ship, Skull Rock, and the Carrousel. 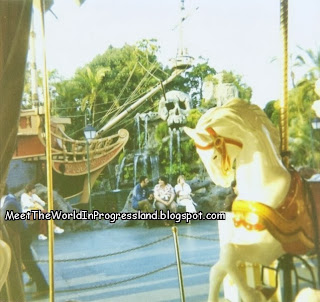 I wish this next photo had turned out better. It's a view of the Carrousel as seen from the cove behind Captain Hook's Pirate Ship. At the bottom of the photo is one of the many barrel-shaped stools that could be found in the cove's dining area. 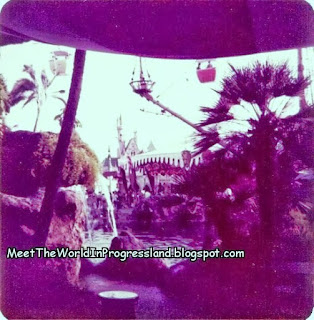 Here's one of the versions of the guidebook that was available during the time that Fantasyland was under consctruction.

The Fantasyland pages of the guidebooks would change throughout the year as the various attractions would shut down for remodeling. This version shows that the Carrousel had already been relocated and reopened. 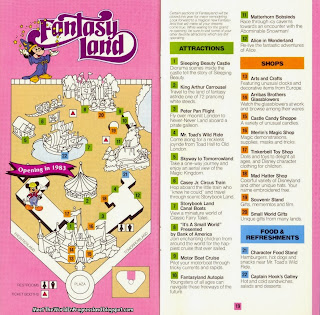 By the time this photo had been taken, the Carrousel had been shut down again. The planter around it had already been added, and workers were just beginning to paint a new design and color scheme on the roof. Note also, that the new facade on Mr. Toad's Wild Ride is nearing completion. 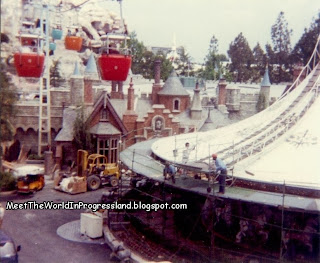 This last photo shows the Carrousel on the official opening day of the New Fantasyland. The "Sword In The Stone" ceremony is taking place in the foreground with Merlin being assisted by one of the "Make Believe Brass" band members. The band was also making their park debut that summer along with the New Fantasyland. 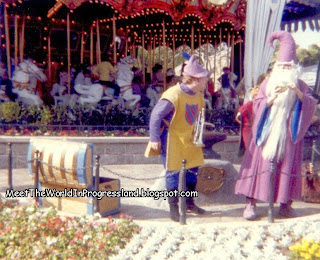 I hope everyone enjoyed this trip back in time, to the transitioning Fantasyland of 1982 and 1983!

Nice construction shots. This was probably the best time period to ride the Skyway. A round trip journey and a view of history in the making! Thanks for the look.

Neat. I have some New Fantasyland construction shots, but they aren't as interesting as these. I should scan them!

Gotta put that watermark where it can't be cropped off! Believe me, I've wanted to do the same thing at times.

OTB, I remember it was very exciting to "fly" over the construction and see the changes to everything......everything EXCEPT for the demolition of Captain Hook's Pirate Ship AND Skull Rock. That was horrifying. I have some pics of THAT demolition and I will probably post them eventually, but it breaks my heart every time I look at them.

Major Pepperidge, I am interested to see your New Fantasyland construction shots. I love the close-up shots of the signs on the construction wall that you had posted, that's why I included the link to your pics! As for the watermark....I know you told me once that you never wanted to do that. I never did either, but when you see your personal pics posted on other people's blogs on on Facebook fan pages, and there isn't any credit given as to where they came from, that's when I changed my mind about it. And then when I continued to see my photos out there, but with my watermark just cropped off the bottom of the pic, I decided I would have to get "ugly" with my placement of the watermark. I hate having to do it though. That is even part of the reason why my posting frequency slowed down. I am going to try to post more often now. In fact, I have a new post going up right after I finish writing this!