Let us continue with our ride aboard the newly reopened Sky Cabin at Knott's Berry Farm! 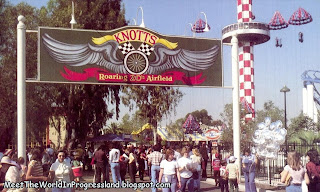 This is the view today, looking in a more or less northern direction. 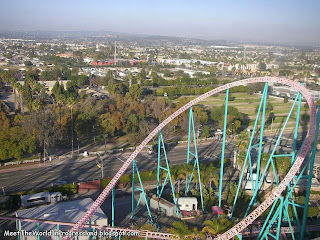 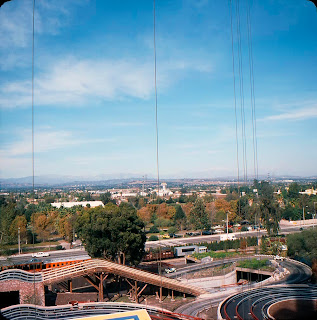 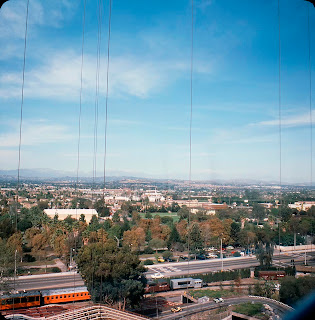 I will attempt once again, to point out a few of the sites below. The green circle is around the barn where the park's horses are boarded. It is also used to store the stagecoaches. The tree-filled land in front of the barn is more overflow parking for Knott's. 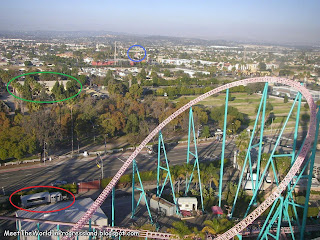 The blue circle is around the Movieland Wax Museum sign on Beach Blvd. The museum itself closed in 2005, but the sign and the building are both still standing today. The building is the large reddish-colored structure in the photo above. It is painted white in the vintage photos. 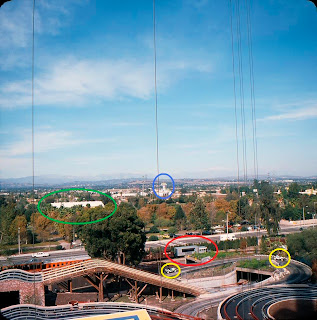 Note in this second vintage pic that the Movieland Wax Museum sign is turned so that we can't read it. I don't remember it doing this, but it makes sense because many of the business signs from that time rotated up until the gas/energy crisis of the seventies. 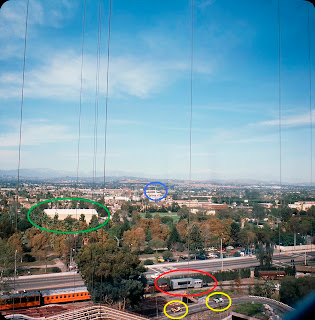 Here is a close-up of the sign today. It really was impressive when all lit up at night. I remember the diamond shapes twinkling like a vintage Las Vegas casino sign. There is currently a Starbuck's in the old museum gift shop that actually opened even before the museum closed. I think Starbucks or the City of Buena Park should pay to light up this sign at night as a historic landmark. It should even rotate again! I guess that would be a waste of energy though. They should at least keep it standing and never tear it down.....how about that? 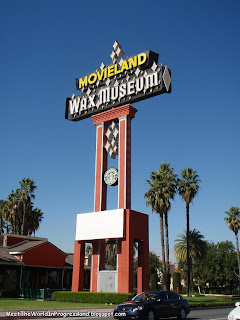 The red circles in both the current and vintage photos show the Galloping Goose railcar parked on a spur track alongside La Palma Avenue. This unusual locomotive was built in the 1930's by the Rio Grande Southern Railroad and is still in operation at Knott's today. It tends to be used more on days when the park has lower attendance. These two close-up shots were taken just last September while the car was in use. 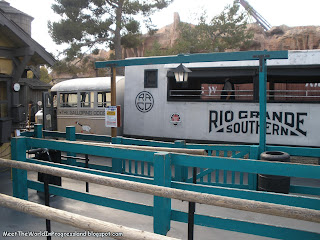 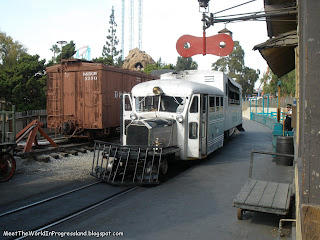 And last but not least, we have a close-up of one of the vehicles that are circled in yellow in the vintage pics. These cars were a part of Gasoline Alley.....one of three car-driving rides that coexisted at Knott's once upon a time. (The other two were Henry's Auto Livery which was located in the parking lot at the corner of Beach Blvd. and Crescent Ave., and the Merry Go Round Auto Ride/Antique Auto Ride/Tijuana Taxi which was located in Fiesta Village). Sadly, none of these car attractions are in operation at Knott's today. 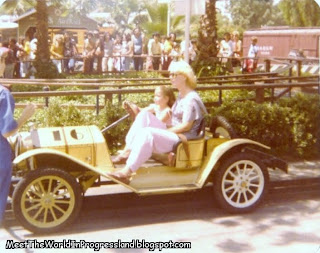 I want to ride in the Galloping Goose!

I enjoy the way you are pointing out landmarks (like the horse barn) and telling us what they are, because I sure don't know!

It's a bummer to drive past that Movieland sign, since it looks almost like you could still go inside. No such luck!

Tokyo, you are doing a FANTASTIC job on these posts!!! Boy, I miss those little gas powered cars. So glad my son got to ride them.atientu brepacce

I miss those cars too! They should have left them alone!