Today we will continue our trip aboard the Sky Cabin at Knott's Berry Farm. Incidentally, the tower that the observation car travels up is 20 stories in height. Supreme Scream which is the white structure on the left, was built in 1998 and measures a little over 30 stories tall. Windseeker which can be seen on the right, opened last year and is just about 30 stories in height. I was trying to get a photo of Windseeker and the Sky Cabin operating simultaneously, but I realized it was going to take some time in order to catch just that right moment, so I gave up! 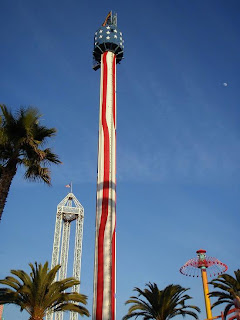 Here is the view from inside the Sky Cabin looking out in a northwestern direction. 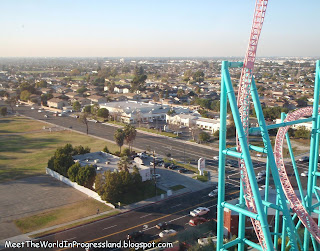 And here is Major Pepperidge's 1977 slide showing the same view. Of course the parachutes are now long gone, but I do remember what it was like seeing them sail past the windows of the Sky Cabin. I love that this photographer not only captured one of the parachutes on film, but also that one of the riders is waving at him or her. 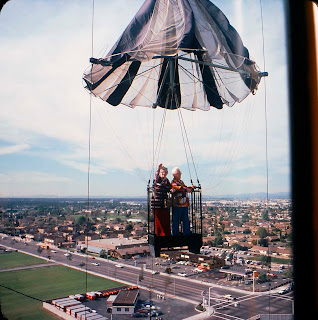 Let's go back to the "today" shot and I'll point out a few things....just in case anyone is interested. The street intersection below is Western Avenue and La Palma Avenue. You can see that there used to be a gas station on both the northwestern and southwestern corners of the intersection, but they are gone today. A convenience store has replaced one of them and the other is now just a dirt lot. The grassy area to the left in both photos was and is overflow parking for Knott's. I think it is mostly used when the park's Halloween Haunts are taking place. 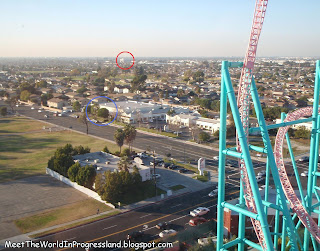 I've circled two areas on the photos. The blue circle is showing the U.S. Post office that is still in the same spot today (but now somewhat hidden by trees). And the red circle is around the five story office building that is located at the corner of Orangethorpe Ave. and Valley View St. (also visible when driving on the 91 Freeway). 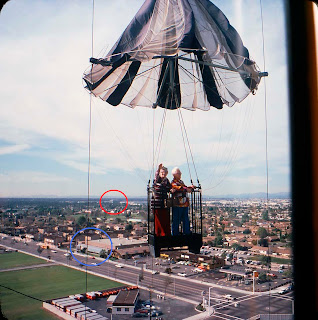 Here is a close-up look at that building. I remember when I was a kid, the building had large "J.C. Penney" signs on all four sides of it. Today there is just one smaller sign on the top that reads "Progressive," however the massive warehouse building behind it is still a J.C. Penney Distribution Center. 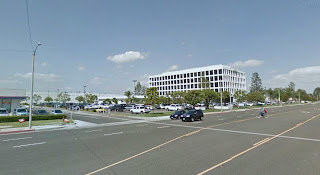 And we have one last photo for today. This one was taken in 1985 looking in the same general direction, but just a little more to the left. The building in the lower left corner is a Fire Station and the buildings just above it (across the grass parking area) are part of Walter Knott Elementary School. Both are still standing today. 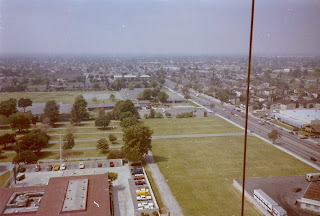 Another great job of matching up the shots. The old ladies in the Sky Jump appear in several of the 1977 photos, possibly just be accident!

Once again I am amazed at how much the scene has stayed the same! Trees are bigger, and of course there are some differences, but it really does look very similar to the way it did 35 years ago!

Thanks, Major! If the photographer and the older ladies were together, they had perfect timing of the Sky Cabin and their parachute both being "up" and the Sky Cabin rotated their way. Of course they did originally take you up twice in the parachutes. I remember riding that first time when they would only send you up once.....what a rip off! Now that I think of it....I wonder if they started doing that when they stopped having individual ride tickets?

I've stated many times that I am terrified of heights and yet, somehow, I forced myself to ride those parachutes. Looking at those ladies made me shiver!! How on Earth did I do it????