Happy Thanksgiving, everyone! I don't have anymore "Thanksgiving Weekend at Disneyland" items to post, because I posted all of them last year. But since it's still November, here are a few Disneyland items from November of 1983. The park was having another month-long celebration in honor of Mickey's birthday. Last year, I posted a vintage Disneyland trip report from November of 1982 which included photos and souvenir items from "Mickey's Month." The entertainment guide below has the same cover as the guide for 1982, but there are some changes in the entertainment listings. 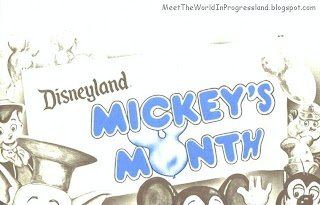 There wasn't a Mickey's Birthday Parade this year. The "Flights of Fantasy" parade had made it's debut in the summer of '83 along with the opening of the "New Fantasyland." And since Mousercise was the latest rage, kids could join Kellyn from the Disney Channel TV Show for some aerobic fun over by It's A Small World. 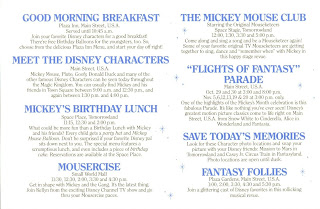 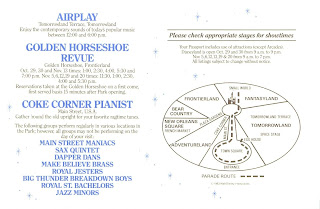 The Disney Channel was also making it's debut in 1983. This ad is from the back cover of the guide. 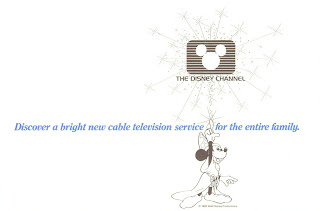 In 1982 and 1983, guests were handed a free gift at the main entrance during Mickey's Month. This year's gift was a headband that could be worn during your Mousercise workout. To see a photo of some kids at Disneyland actually wearing these as they worked out with Kellyn, click here for a great vintage photo from blogger, "Disney On Parole." 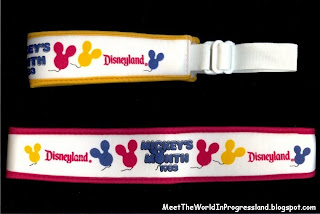 Unfortunately, I did not take any pictures during this "Mickey's Month" visit like I had the previous year, but I'm going to include a couple extra items from around the same time to make up for the short post today. This first one is a newspaper ad from 1983 for the Disney Channel. 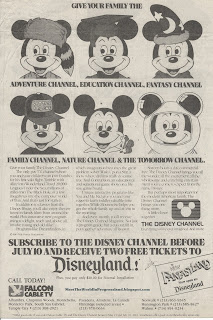 And this last item is for the California Teachers Association Party that was held at Disneyland in November of 1983. Admission to Disneyland, plus unlimited use of all attractions and shows for only $7.00...and parking was included! What a deal! 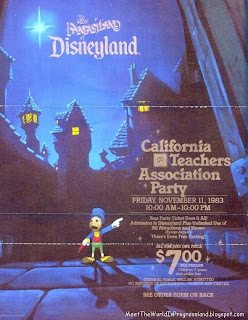 Speaking of deals, if anyone plans to go shopping tomorrow on "Black Friday", be safe and watch out for the crazies who will trample you just to get their hands on a Cabbage Patch Doll, a Teddy Ruxpin, or a Tickle Me Elmo.
Posted by TokyoMagic! at 12:50 AM

I hope you had a Happy Thanksgiving!

I remember actually wanting to watch the Disney Channel back in the day.

VDT and Dan, The headbands make me think of Olivia Newton-John in her "Physical" video, even though hers was skinnier and didn't have Disney stuff on it.

Major, we didn't have ANY cable channels in 1983. I remember going to a friend's aunt's house to watch the Disney Channel when it was new.

I loved your feature on Mickey's Month!! I was there in October 1983. Thought you might like to see some pics. Here's a few here with the headbands you mentioned:
http://www.disboards.com/showpost.php?p=25327272&postcount=2

and one more here where you can see the party hats and cake:
http://i206.photobucket.com/albums/bb97/dtmeyer/1983.DisneyDanielleMickey1.jpg

DM, Great vintage DL pics!!!! Thanks for sharing the links to them!