Elvira - In Wax, In The Flesh, and Lookalikes

This post is in honor of Elvira's return to television. Yes, the Mistress of the Dark is back on the boob tube and hosting her all new "Movie Macabre." For the Los Angeles area, her show is on Saturday nights at midnight on KDOC (home of the Mighty Ducks!) For other cities, please check your local television listings.

Elvira first hosted "Movie Macabre" back in 1981 on KHJ-TV in Los Angeles. In 1982, she made television history by being the first person to be taped and broadcast in 3-D. I still have my 3-D glasses from 7-Eleven! 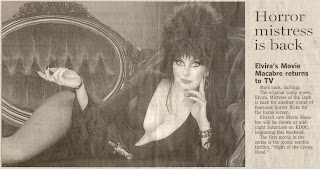 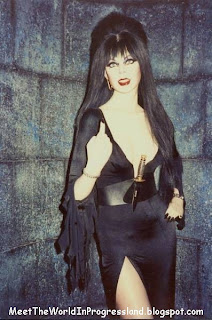 Here's a publicity photo taken at Movieland with the real Elvira posing alongside her wax likeness. I'm guessing this was taken when her figure was unveiled to the public. Movieland often had the actual celebrities appearing at the dedication of their figures. 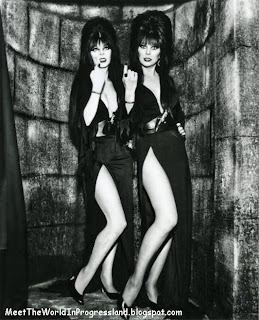 Now let's jump over to the Hollywood Wax Museum on Hollywood Blvd. in Hollywood, California. I took this photo in 1993...the one and only time I was ever in that museum. I know it is still open and operating today, but I wonder how their business is doing now that Madame Tussaud's Wax Museum has opened just down the street? 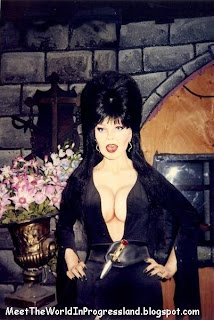 And since we are in Hollywood, let's venture a few miles southwest and take a look at the annual West Hollywood Halloween Carnival which attracts about a half million people every year on Halloween Night. This is actually the Los Angeles area's second largest event, second only to the Tournament of Roses New Year’s Day Parade. Here's a photo taken in 2001 of "Elvira" and "Evel Kenievel." I thought that this woman really did look like Cassandra Peterson. 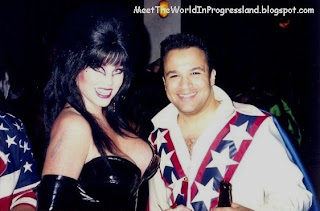 These next three photos were taken at the 2002 Carnival event. This Elvira costume actually could have been a mini parade float. The dummy in the background was part of the vignette, along with a table that had a fake guillotine blade hanging overhead that actually swung back and forth (inspired by a scene in the movie, "Elvira's Haunted Hills"). I remember it was so crowded, that I could not get back far enough to get the entire set-up in any of my photos. 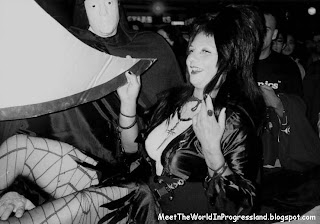 The legs were actually fake. "Elvira's" real legs were underneath the table. The whole thing was on wheels and could be moved around when the crowd would allow it. There are some REALLY clever people out there, I tell ya! 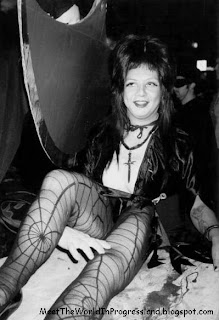 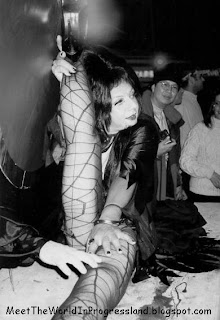 Last up is a shot I took of the real Elvira performing at Knott's Berry/Scary Farm in 1988. I posted this photo previously in a "Knott's Halloween Haunt" post from last year. I do wish Elvira still appeared at Knott's for their Halloween Haunt nights. For now, I guess I will just have to be satisfied with seeing her on TV as she hosts her all new "Movie Macabre." 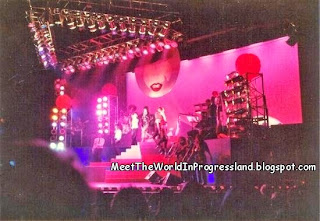 Unpleasant dreams, everyone!!!
***Post Update: To watch a short promo for Elvira's all new "Movie Macabre", click below:
Posted by TokyoMagic! at 5:00 AM

Fun Elvira fact: She was also the stripper on the cover of Tom Waits' 1976 album Small Change.

How can you not love Elvira?

A couple of years ago I worked at a building in Burbank (on the corner of Olive, near Buena Vista) that had two radio stations on the top floor. I always arrived at work early and one morning got on the elevator with a woman only to realize that it was Cassandra Peterson! She looked great, even though she was not in her Elvira getup. It was around Halloween, so she must have been heading for a radio guest spot.

OH MY GAWD, I LOVE ELVIRA! Now I have to go back and actually READ your post, LOL.

I'M SO HAPPY!!! I sooo wish I could look like her!

Very cool! I regret never getting to see a Wax Museum. Maybe someday...

It's a shame that Elvis wasn't in that picture with Elvira and Evel Kenievel.

Elvira seems to be very busy this time of year--I know she makes lots of appearances at events across the country in October. She also owns the rights to her character (smart move!).