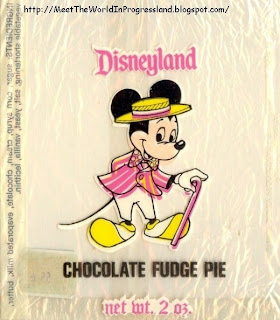 .
Today we have another candy wrapper from Disneyland circa the late seventies/early eighties. This cellophane wrapper contained a small aluminum "pie tin" filled with chocolate fudge. Like the candy bar wrappers from my last post, the Fudge Pies were also sold at the Candy Palace on Main St. and the Castle Candy Shoppe inside Sleeping Beauty Castle. The price tag is still on the back...only .55 cents! Now they would probably charge $6.95. (I'm just guessing.)
. 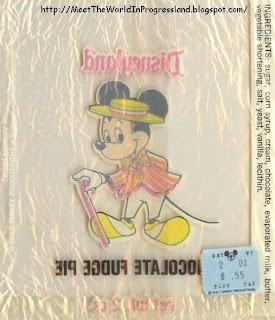 .
Next, we have a paper wrapper for a Frozen Banana. This is also from the late seventies. I believe these were sold throughout the park, but for some reason I remember always buying them from an ice cream cart that sat at the entrance to Bear Country.

Here's a close-up of the print on the back of the banana wrapper.

.
And just in case you want to make your own at home, here are the ingredients. Just make sure to process your cocoa first with alkali. That actually doesn't sound very healthy. Don't they put that in batteries?
.

.
Does Disneyland still sell frozen bananas? I lost interest in them quite some time ago. They take too long to thaw and in the meantime, it always feels like you are going to break a tooth on them. During a recent trip to Tokyo Disneyland, I discovered that they sold chocolate covered banana SLICES. They thawed much quicker, which made them less frustrating to eat. I wish I had saved the wrapper for those, darn it!
.
Both of the wrappers today were saved from childhood visits to the park. I remember being fascinated by the graphics on these and I wanted to take home a piece of the park that normally would not have been kept or saved. Yes, even as a kid I was thinking of stuff like that. One person's trash is another person's.........

Too cool you saved this stuff as a kid! I saved tons of stuff too, but somehow now at 44 years old, only a fraction of it is still with me! I guess moving 20 times before I was 30 had something to do with it!

Yes they do still sell frozen bananas at DL, and yes, they are frozen SOLID and take forever to thaw! Oh and $6.95 sound about right for the chocolate.

Those frozen bananas ARE rock solid! They're the perfect diet snack, because your jaw gets tired of gnawing before you finish them! ;-) Great post--who knew those old wrappers could bring such a smile.

I sold a bunch of those frozen bananas in the early 80s, including at the wagon parked right next to the Bear Country entrance. Maybe you bought one!

At .85, they were the priciest frozen item Outdoor Vending had. Ice cream bars and sandwiches and frozen juice bars were .65.

The peanuts from those darn bananas always got all over!