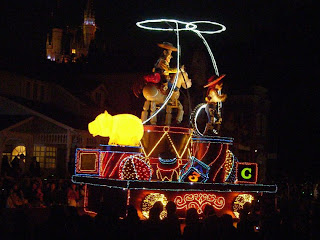 Sometime after posting about Tokyo Disneyland's Electrical Parade back in September of last year, I realized that I had left out one float. That float (seen above) is from the "Toy Story" unit of the parade and follows the Buzz Lightyear float.

In that same set of posts, I had mentioned that since Tokyo brought back their Electrical Parade in 2001, they had already made some changes to it. One of those changes took place in 2007, when the current Monsters Inc. , Nemo and Crush floats took the place of the former "A Bugs Life" unit. Here for the first time at Meet the World, are those floats from the "A Bugs Life" unit. 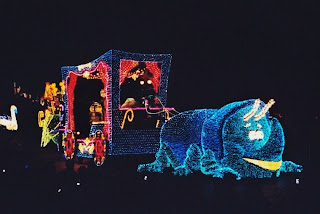 Below, are Francis the Ladybug, and Tuck and Roll. Note the praying mantis (Manny?) driving the circus wagon and the moth/butterfly on the back (Gypsy?) There was also a parade performer in a walking stick costume following behind the wagon, but he never photographed very well....at least not with my camera. 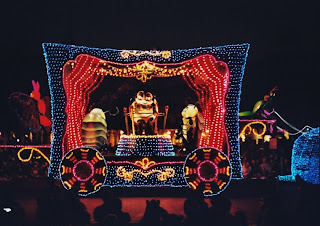 Next, we have Flick and Princess Atta. 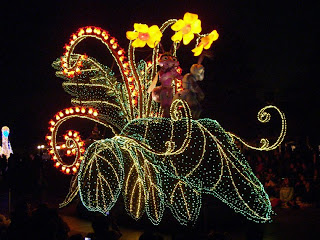 I truly miss these floats, but at least they were replaced with something equally as good. I wish that would happen more often in Anaheim when something gets replaced. Light Magic was NOT an equal trade for the Electrical Parade. Pooh is not as good as Country Bear Jamboree. The New Tomorrowland of 1998 was.....well that was just wrong all the way around. Oh, but I digress. It would have been nice though, if Anaheim could have inherited these retired floats for their Electrical Parade, seeing as how it hasn't had a new float added in decades. 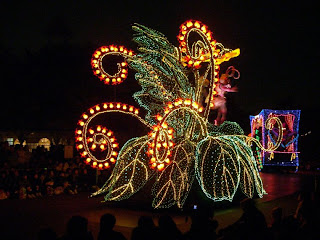 My next post will have more floats from Tokyo's Electrical Parade that have already been retired and replaced.
Posted by TokyoMagic! at 12:10 AM