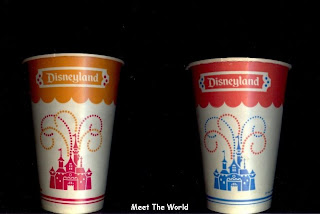 Today, we have a collection of vintage cups from Disneyland. These cups were used for serving beverages at various restaurants throughout the park. Like the matchbooks from my earlier posts this month, I acquired these during routine visits to the park, both as a kid and as a teenager. They are in relatively good shape considering their age.

In the photo above, we have two wax-coated paper cups with the same graphics, but with two slightly different color schemes. The one on the left is from the early to mid eighties, while the one on the right is older and was used through the seventies.

The next pic shows the back and front of a cup that was used during the park's 25th birthday celebration in 1980. Again, this is a wax-coated paper cup. 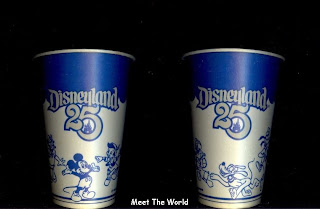 Below, we have a cup from 1984, the year that Donald Duck was celebrating his 50th birthday. 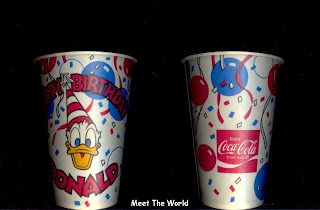 I don't remember the date of the Cafe Orleans cup below, but I would guess it is from the early to mid-eighties. The cup on the right is made of styrofoam and was used for hot beverages during the park's 30th birthday, in 1985. At that time, PSA Airlines was the sponsor of the CircleVision Theater ("World Premiere CircleVision") in Tomorrowland. 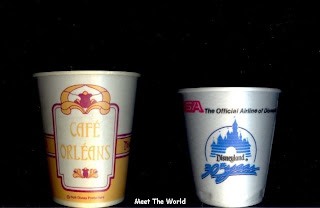 And last up today, we have a pic showing the front and back of another cup from the park's 30th birthday year. It has the same 30th birthday logo as the one above, but this one is made of wax-coated paper and would have been used for cold beverages. 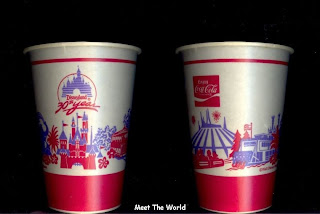 Drool..... These are in super shape (just like you match book collection). Thanks so much for sharing these, I have visions of Disneyland cups dancing in my head... PSA the planes with a smile!

I'm glad I'm not the only one with old cups!

The 30th style cup continued to be used until the end of 1989 (minus the anniversary logo). At that time paper goods switched over to the 35th logo.

In 1991 the park's promotion was "Disneyland: The Original" but I think the paper goods switched to 'Thinking Mickey'.

If anyone can do a screen capture of the 35th Anniversary TV Special, the large 35th cup was used as a popcorn container for a scene with Ernest!

I'm glad you enjoyed the collection, VDT. Yes, PSA's slogan was "Catch Our Smile," and they had smiles painted on the noses of their airplanes!

Thanks for the additional information Westcot2000! I've included a "thinking Mickey" cup in my next post.

Hi Tokyomagic! I was at the park again yesterday, got my newest sin of a Latte first thing from the bakery. As I sat to drink it (on east center street) I thought of your cup post so here's one from 2009:

I thru the cup away after I was done, didn't seem worth keeping, but I can get you a clean one on my next visit, just let me know.

I have a little over 10 waxed cups of donalds 50th birthday. Any value?

Unknown, I'm not sure how much you could get for one of the waxed "Donald" cups. You might want to look on ebay. But check out the past/closed auctions, to see what buyers paid, rather than just what the sellers are currently asking for theirs.