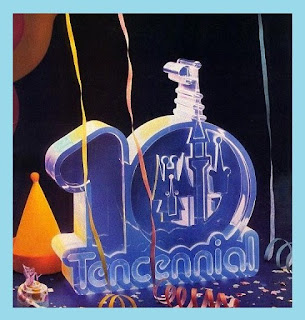 Let's take a look at the TV Guide listing for that anniversary special. Here's the cover of the January 16, 1982 issue of TV Guide. 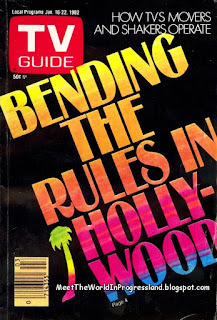 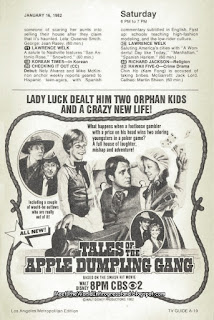 The TV movie led to a TV series about a year later, starring Barry Van Dyke (Dick's son) in the title role of Russell Donovan (played in the original film by Bill Bixby and in this TV movie by John Bennett Perry). For some reason, the series was titled Gun Shy. It only lasted for six episodes before being canceled. I vaguely remember watching that series....or at least some of it. 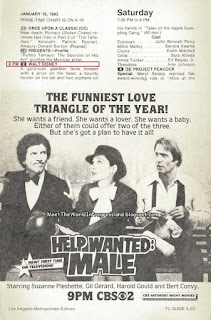 Now let's look at that 10th anniversary special. Dean Jones and Michelle Lee (from Knots Landing) were reunited for this special. They had previously starred together in the 1968 Disney film, The Love Bug. Dana Plato (from Different Strokes) and Ricky Schroder (from Silver Spoons) play their children, while Eileen Brennan (from Private Benjamin) plays an aunt. 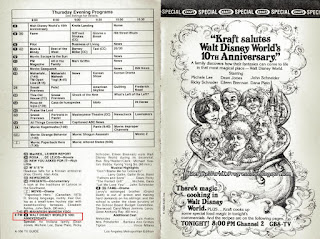 Michael Keaton plays a cast member with multiple jobs in this special, including a bellboy, a waiter, a valet, and a clerk in a souvenir shop at the Contemporary Hotel. He even sings (sort of) with Michelle Lee and Dana Plato.

At the very end of the special, the announcer reminds viewers that "All of tonight's recipes (which were shown during the commercials) can be found in tonight's listing section of TV Guide Magazine, and at many stores." Matterhorn Chicken? But Walt Disney World doesn't have a Matterhorn! 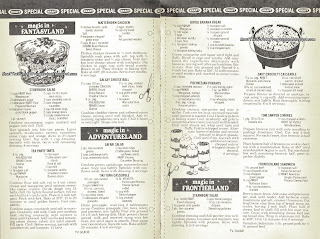 Also on TV that week: People of the Year: The 25 Most Intriguing People of 1981. That would be a hoot to watch today! 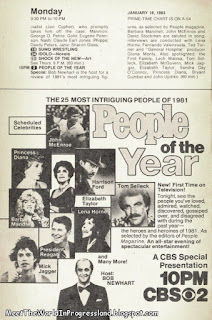 Bert Convy was back with an all new version of Tattletales. Incidentally, the original Tattletales from the 1970's currently plays on the "Buzzr" channel. I'm addicted to that channel and Match Game '78! 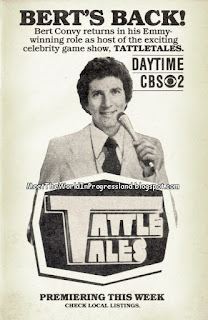 And Meryl Streep was appearing in a new musical special, Alice at the Palace. 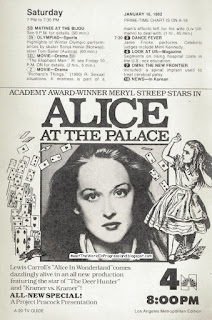 If you want to watch the Walt Disney World special (minus the Kraft commercials), I've included a link to it below.

The show is just as corny as most of the Disney TV specials were back in the day. From the Tour Guides and Small World Hostesses drooling over John Schneider while he serenades them, to Dean Jones singing (sort of) to Ricky Schroeder about "Fathers and Sons", it's definitely a cheesefest....and even a bit uncomfortable at times. But if you're a fan of vintage Walt Disney World, or a fan of any of these celebrities, it's definitely worth watching.

Oh, and José the parrot, makes a cameo appearance in a souvenir shop at the Contemporary Hotel at the 24:00 minute mark. I wonder if that was a real souvenir that used to be sold, or if it was one of the actual animatronics from the Tropical Serenade/Tiki Room attraction?

I'm adding these pages from the same issue of TV Guide, because of the Mr. Merlin comment (below) by Major Pepperidge. I'm sure it was a wonderful show! With Elaine Joyce in it, it couldn't have been all that bad, could it? Barnard Hughes was also starring in the original version of Disney's Tron, which had a theatrical release in July of that same year. 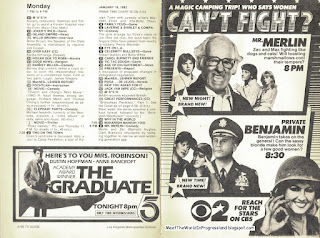 Also....after writing this post, I came across this promotional pic of Ricky Schroder in the 1981 Walt Disney Productions Annual Report: 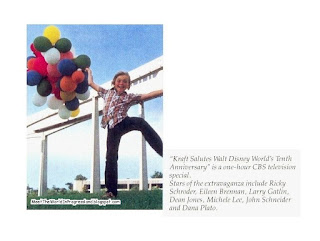 Of course it was a cheese-fest. It was sponsored by Kraft. I love the TV Guide stuff. I didn't realize "The Apple Dumpling Gang" spawned a tv show. And I did watch that video. Yikes!

Ken, Ha, ha! I didn't even think of the Kraft connection when I called it that! Thank you, and I am glad you enjoyed the post. I'll be having more "TV Guide" posts in the future!

Boy oh boy, why do old Disney televisions specials have to suck so much?!?! I realize that this was an age in which we got "The Brady Brides", "Mr. Merlin", and "The Greatest American Hero", but DAMN. Sorry for my profanity! Granted, these days they are fascinating in their own terrible way, and you DO sometimes get a glimpse of something interesting. But DAMN.

I defy you to think of any recipe or food product that would not be improved with the addition of a melted Kraft American Cheese slice on it. YOU CAN'T DO IT, CAN YOU?

Meanwhile, I only wish that there were ever souvenirs as cool as a 100% accurate Jose back in those days.

Thanks for the blast from the past with those scans from TV Guide. Tattletales, with Bert Convy! Magnum, P.I.! Some actress with the phony name, "Meryl Streep"! Truly, it was a time where giants ruled the Earth.

Barry Van Dyke has such a natural way of delivering lines - it's a shame he was stuck on such lackluster shows during that time period. His performance is actually my favorite part of Galactica: 1980. Of course, that doesn't set the bar too high, does it?

Chuck, it's funny....I looked him up when I was writing this post and he looks so familiar. "Gun Shy" was over 33 years ago and only lasted for 6 episodes....and I'm not even sure I watched more than one episode. I never watched "Galactica: 1980" or "Diagnoses Murder," but he did guest star on a lot of other TV shows, so that familiarity must be from those.

Major, I'm glad you enjoyed the post! I think the last great Disney TV special was "Sandy In Disneyland" with Sandy Duncan. What could be better than hearing John Davidson sing "Top Of The World" while the Main Street Firetruck comes oh so close to running park guests over? Maybe this 10th anniversary special would have been better if they had hired Meryl Streep to play a cousin, a neighbor or a friend of the family?

Yes, all food items can be improved by adding a slice of American Cheese.....or a big glob of Cheez Whiz. Gee, Kraft should be paying us!

**Post Update! I just added two more images to this post! Major Pepperidge, your mention of the TV show, Mr. Merlin, reminded me that there was a listing for it in this very same issue of TV Guide!

I still think it's a crime that Sandy Duncan was not nominated for her role in "Million Dollar Duck". That hack Jane Fonda won instead.

Mr. Merlin... good old Barnard Hughes. That guy had a long career! I thought for sure that he did the voice of Merlin in "The Sword and the Stone", but I was mistaken.