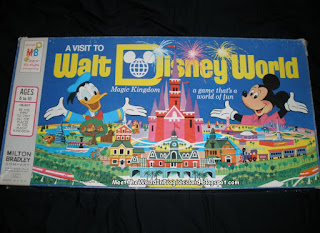 It was December of 1972 and my mom and I were in the toy department of Sears. She told me to pick something out to give to my brother for his birthday, and this is what I chose. My brother and I both loved everything "Disney", so even though it was something that I would have also chosen for myself, my brother liked it just as much! 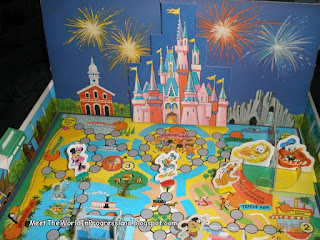 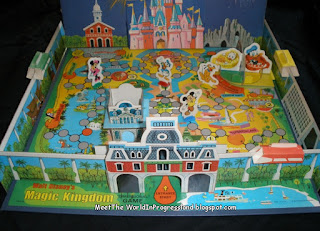 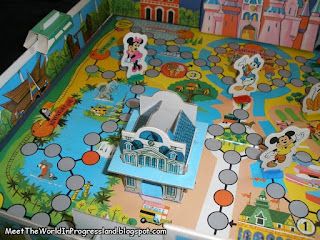 Whenever a playing piece landed on a "haunted" red spot on the board, the player would have to drop a little wooden disk through the roof of the Haunted Mansion. The disk would then roll down a ramp and out the front or back door and roll across the game board. Wherever it stopped, that is where the player was to move their playing piece. 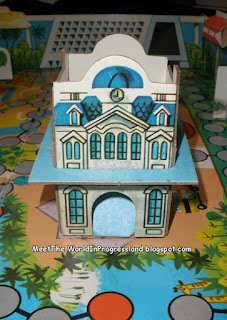 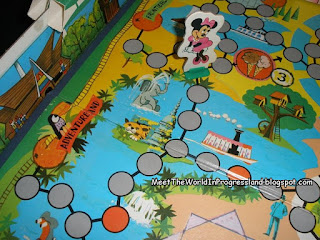 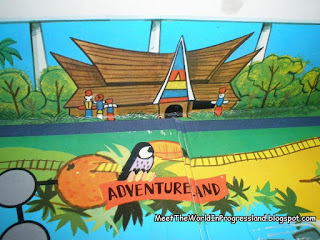 If you landed on one of the four spots marked "Monorail Spin", you would discard a Monorail "ticket" and then you could slide the Monorail car along the track to advance your playing piece to the other end of the board. 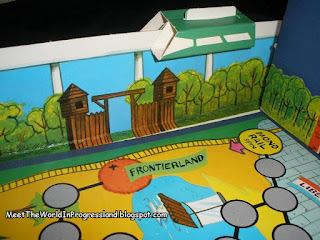 Each of the "lands" and attractions that need to be visited during game play, are designated with an orange. Interesting. They should have just done a cross promotion with the Florida Citrus Commission and included the Orange Bird! 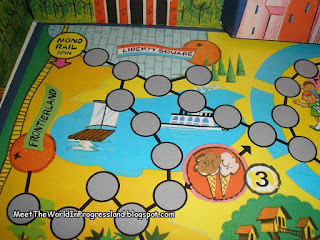 I love the graphics used on the game board! 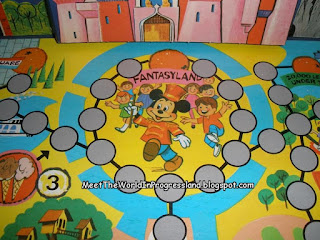 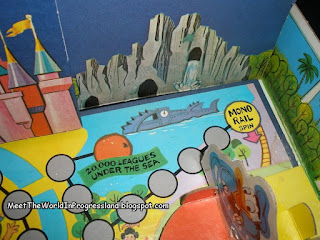 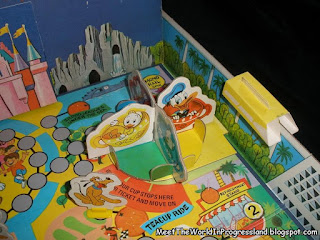 For the "Tea Cup Ride", the instructions state, "A player arriving at the Tea Cup Ride entrance must board this ride. He spins the spinner and moves the Tea Cup Ride the same count. In order for a player to leave the ride, his spin must land him at the Entrance/Exit by exact count".

The turntable was to be rotated a quarter turn for each number spun, however, the instructions never say whether you had to consistently turn the Tea Cups to the right or to the left. I wonder if we ever thought of that as kids? 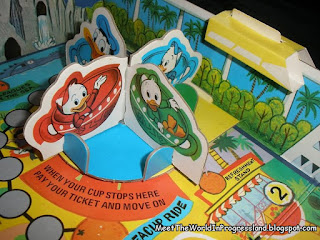 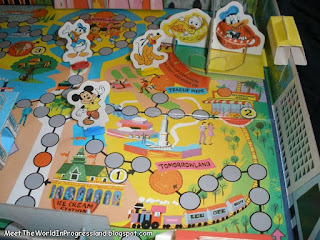 Could that be Anita Bryant in front of the "orange juice" refreshment stand? Hmmm, I don't see any whip cream on her face, so probably not! 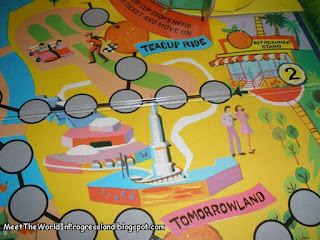 If a player landed on a space that was already occupied by another player, he/she could move that other player to one of three refreshment stands on the board (including the Ice Cream Station) and that player would then have to continue their game play from that spot. 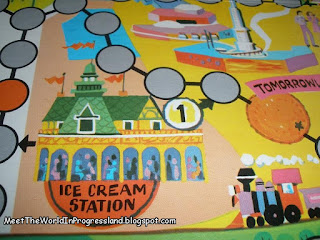 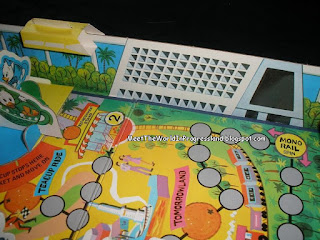 I forgot to mention that in order to ride the Monorail, a player would first have to use the spinner and the arrow would have to land on a Monorail space. 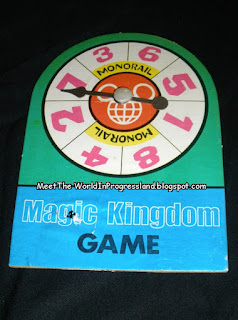 Here are some of the "tickets". Each player had their own color that corresponded with their playing piece's base. I wonder why every ticket has the Monorail on it? 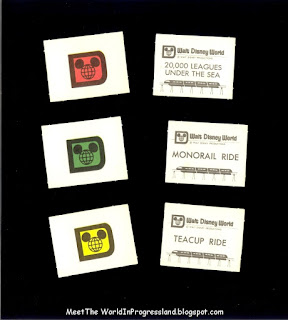 The object of the game is to visit all the park attractions and use up all of your tickets. The first one to do so, wins. For anyone that wants to take the time to read all of the game instructions, here you go! 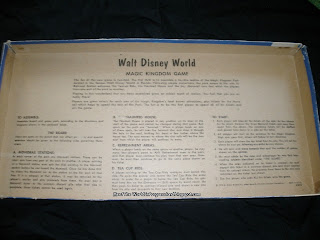 We even saved the Assembly Instructions insert! 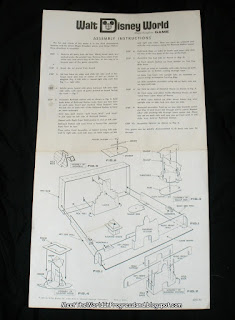 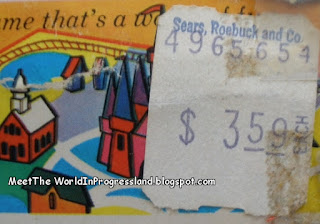 (To see another children's game from 1972, that was based on a Disneyland and Walt Disney World attraction, click here: Whitman's Mad Tea Party Game.)

Fujitsu ScanSnap said...
This comment has been removed by a blog administrator.
October 1, 2015 at 2:12 AM

What a great memories this brings back! I had a good friend in K-2nd grade who had this game as well as Lakeside's "Haunted Mansion Game." He was both a Disney Park and Haunted Mansion fan, so you can imagine the hours of fun we both had playing them.

Chuck, I also have that Lakeside Haunted Mansion Game! I've already taken pics of it for a future post, but I might just wait until the next anniversary of the H.M. (in August).

What a Great Game. I Never Know this Game Would be Existed.

I have a special fondness for stuff like this! Activity books, pop-ups, coloring books, sticker books, and yes, board games. I never had this one, it really does have some great graphics.

Josh, I never saw this anywhere else again. If I hadn't seen it at Sears during that shopping trip, I wouldn't have known about it either....unlike so many other board games that maybe I didn't have, but I was well aware of. I have some Sears "Wishbook" Catalogs from the early seventies and it isn't even listed in the toy/game sections. Thanks for commenting!

Chuck, I may have to post the H.M. game sooner since all the pics have been taken already!

Major, I have a small collection of Disney coloring books and sticker books from my childhood. I even have a book with pics that you "painted", but you didn't need any paint. All you had to do was drag a wet brush over the page and the color came through. Remember those?

I loved those magic watercolor (or whatever they were called) coloring books!

I lost a few of my surviving Kindergarten-era coloring books and stationery a couple of years ago when we had moisture, mice and termites get into a storage unit while I was deployed. We lost probably $2000-3000 worth of books and a lot of priceless personal momentoes in that mess. I still get choked up thinking about it.

Those Wishbooks were awesome. I had a stack of them and can remember spending hours lying on the floor, flipping slowly through every single page of the toy section. I remember being totally freaked out by the Horus figures in a picture of some Egyptian mummy game that fueled a few nightmares.

It's interesting to look at (and think back on) all of the promotional merchandise that was released around the time that WDW opened and soon afterwards, yet I don't think it had the cultural impact or saturation that Disneyland's opening did. I had a Whitman book about Big Al finding a home at the Country Bear Jamboree and a pop-up book about Mickey at the Magic Kingdom, and I knew someone who had this game, and there were always the cross-promotional blurbs in the Disneyland guides, but that's all I remember. Maybe my perception is skewed because i was too young, or maybe it's because we lived in California at the time.

Yes, I do remember those! I always thought that the concept was so ingenious.

WOW! That is one fantastic looking game! It has the essence of early Walt Disney World even with the inaccuracies. My favorite thing is the incorrect Haunted Mansion (which fits in pretty well in its Jungle Cruise/Main Street position in the game).

Dan, I have several more Disney games from this era. And I believe there are more inaccuracies. I'll try to post them all!

Hello! I wanted to ask if this game is for sale from the owner or if there's anyway a digital copy could be provided for all components? Please contact me if possible as my company would be willing to work out out a deal. Appreciate anyones help!

Unknown, the game is a personal item of mine, from childhood. Sorry, but I would not be able to sell it at this time!

Hello! No problem and thank you so much for your response! We completely understand the sentimental value. I'd like to ask if you're willing to jump on a call with me to discuss the components involved (for further study)? I work for a board game company called USAopoly (located in Carlsbad California) and we have a licensor interested in redesigning this game, which is why we are eager to obtain additional game play information. Please let me know if you'd be interested, we'd be happy to arrange sending you some of our company games in exchange for more info. My email is mvarela@usaopoly.com if you'd like to discuss more. Thank you again! -Molly Varela

Hello all, I wanted to let you know that I have a copy of this game that I have just listed for sale on eBay. It is the only active listing in the last several months, I have been trying day in and day out to get a value on the piece. At this point I still do not know what the value of the game is rather I have decided to sell it auction style with no reserve. We will all find out soon enough how rare this game is.