New at Knott's: Part 1 - The Boardwalk 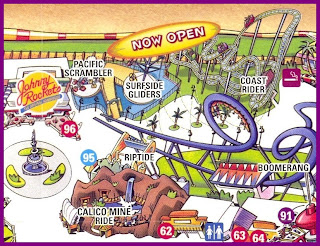 After a six month-long hiatus, I am back with my first post of the year! Happy belated 2013, everyone!

Just in time for summer, Knott's Berry Farm has opened three new rides in the Boardwalk section of the park (formerly the Roaring 20's). The three new attractions, Pacific Scrambler, Surfside Gliders, and Coast Rider can be seen here in this official Knott's publicity photo. (The green track on the left belongs to the newly repainted Boomerang.) 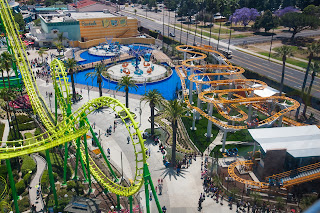 A ribbon cutting ceremony for the new attractions was held on May 30th. Season Passholders were invited to enter the park starting at 7:30 a.m., so they could enjoy the three new rides prior to park opening. This pinback button was being handed out at the entrance. The Calico Log Ride is depicted here as well because it's official re-dedication ceremony (after undergoing a six month-long refurbishment), was also held that day. 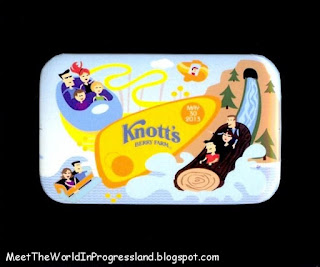 These next three pics show how empty the park was at 7:30 a.m. Actually, these areas were still closed and everyone was being directed towards the new rides. 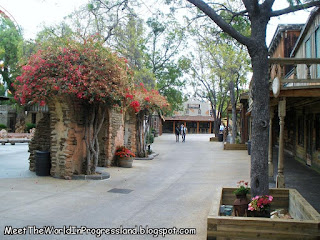 Unfortunately, my photos are a little on the dark side. Southern California's "June gloom" started a bit early this year. 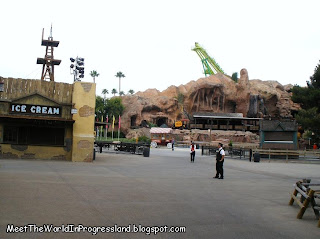 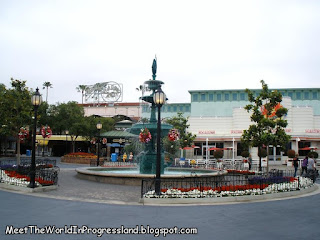 A new sign marks the entrance to "Boardwalk Pier." Located off the Pier are two of the new attractions, Pacific Scrambler and Surfside Gliders. 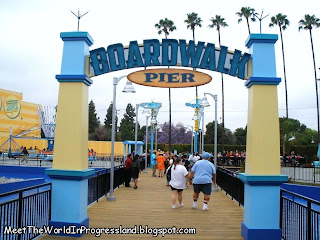 Pacific Scrambler is the old Whirlpool/Headspin attraction that used to be located indoors in the Roaring 20's. It was later moved over near Bigfoot Rapids and renamed Wilderness Scrambler. When construction began on the Pony Express ride, it was dismantled and put into storage. 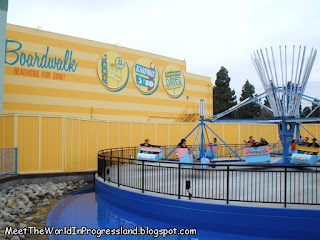 It's nice to see an old friend return to the park! Ahem...Haunted Shack and Knott's Bear-y Tales, anyone? :-) 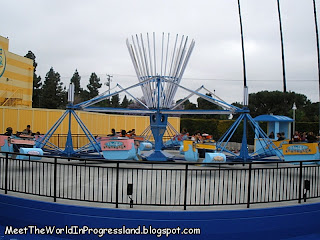 By the way, the new Boardwalk Pier was built over the old splash-down pool of the former Perilous Plunge attraction. Portions of it were filled in and built upon, but it's the same basin. 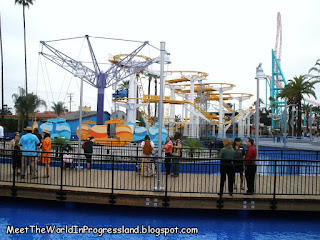 Next up, we have Surfside Gliders. Part of Coast Rider can also be seen here on the far right. 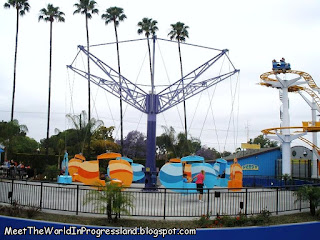 Knott's gives the following description for Surfside Gliders: "Taking the ride into their own hands, guests will pilot their own Surfside Glider. From a height of 28 feet, these two-man aircrafts zip through the air providing a bird’s eye view of the Boardwalk area as they glide over Boardwalk Bay." 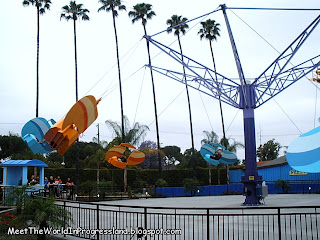 And here's an official publicity shot from Knott's showing a close up of the ride vehicle. You can see the child's hand on a handle which allows riders to control how high and how far out the vehicle will go. 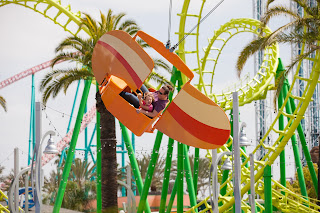 Next door to Surfside Gliders, we have Coast Rider (not to be confused with Ghost Rider over in Ghost Town), which is a "Wild Mouse" type of coaster. Incidentally, Coast Rider sits in the spot that was the original location of the Pacific Scrambler/Wilderness Scrambler/Headspin/Whirlpool attraction. This is another official publicity photo from Knott's. I somehow failed to take my own photos of this particular attraction on opening day. See what a six month hiatus from posting does.....I'm slacking off! But I'll get back into the groove. In the meantime, thanks to Knott's for letting me use their press photos to fill in the gaps in my post! 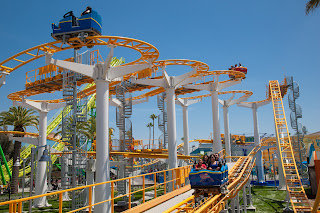 For opening day, Knott's had "streetmosphere" performers wandering around. Here's a typical family from the 1950's.....or would that be the 1960's? 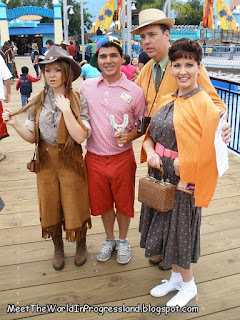 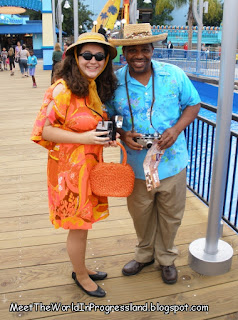 And of course, SNOOPY! 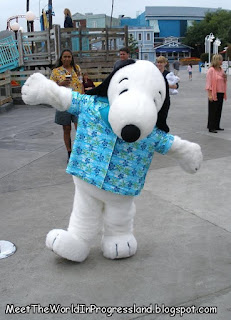 Hey wait a minute, who's that? Why it's everyone's favorite Pop-culturist and Histo-tainer, Charles Phoenix! 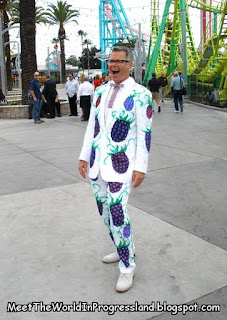 Charles Phoenix was the master of ceremonies for the day. And how much are we loving his boysenberry suit? To borrow a line from Mr. Phoenix, "I KNOW!!!" 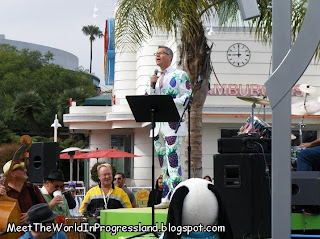 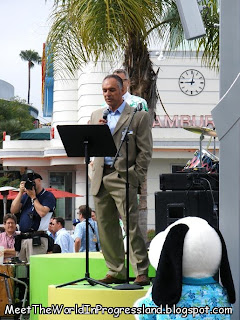 Then it was time for the ribbon cutting. The "ribbon" was actually a very long piece of boysenberry taffy that was brought out on a special board and then lifted off and cut by the "tourist family." 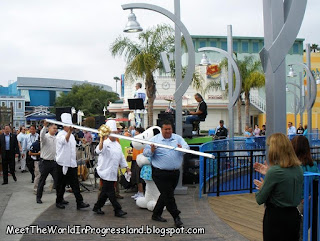 After the ribbon cutting, everyone posed for a photo op. The lady on the far left is Buena Park mayor, Beth Swift. I'm sorry, I do not remember who some of the other people in the photo are, but if someone out there knows and cares to identify them, please do so! 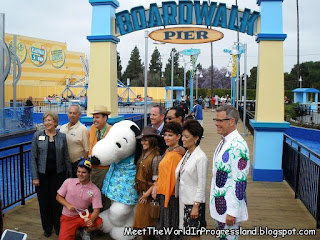 We will end this post with another shot of Mr. Phoenix's fabulous suit. Stay tuned, I will have more of what's "New at Knott's" and also Charles Phoenix as he rededicates the Calico Log Ride in Part 2 of this series! 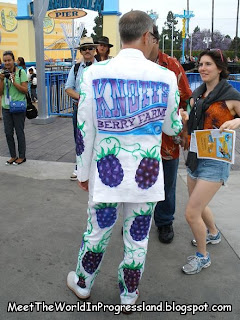 Welcome back Tokyo. I want one of those boysenberry suits!

Wow, a new post! I only just noticed. Love the green color they used for Boomerang. And I may have to look on ebay for one of those pin back buttons.The lack of any banked turns makes those "wild mouse" coasters scary… when is the metal going to fatigue and break?!

The streetmosphere performers are weird; the girl looks like a hippie while everyone else looks like they are from "Father Knows Best".

Charles Phoenix, that was a fun (and unexpected) choice as master of ceremonies!