Once upon a time in Florida's Magic Kingdom, there was a "20,000 Leagues Under The Sea" attraction. It was located in Fantasyland and opened just two weeks after the park's grand opening on October 1, 1971. The attraction existed for almost 23 years before closing in September of 1994 and even though it had closed, the abandoned lagoon remained in place for almost another 10 years. Unfortunately, there was not to be a "happy ending" like there would eventually be with Disneyland's Submarine lagoon. The decision was finally made to drain the water and demolish all remnants of the attraction. This photo was taken in 1975 during the attraction's glory days. 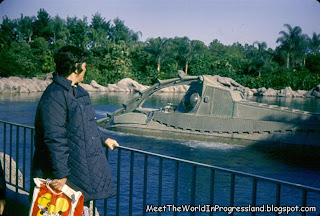 Flash forward to present day and this same area is the location of the Magic Kingdom's current Fantasyland expansion. 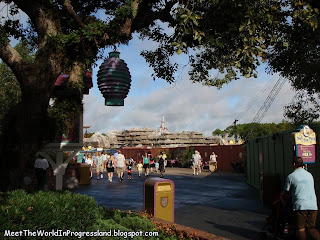 There is a very long construction wall that runs through Fantasyland and contains artwork and descriptions of the coming attractions. This first panel describes the "Be Our Guest Restaurant." 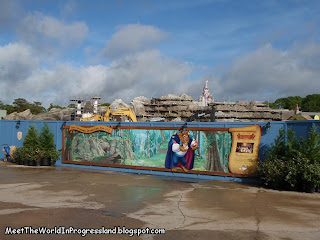 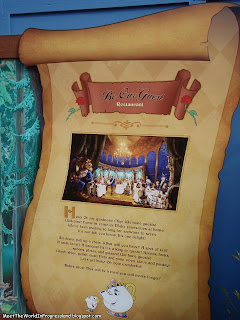 The Beast's castle can be seen above the top of the construction wall. 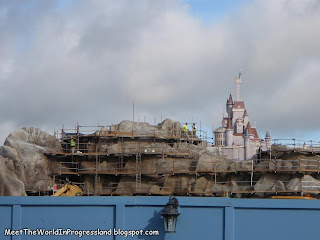 This angle shows construction of the new "Under the Sea Journey of the Little Mermaid" attraction in the background. 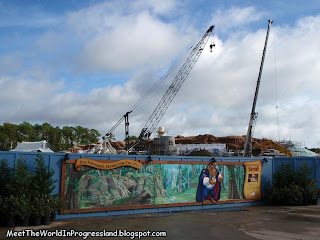 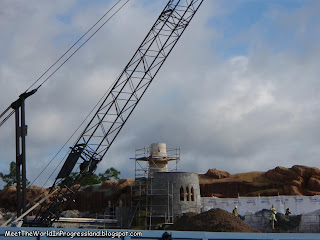 Here's the artwork along with a description of that attraction. I wonder if the interior will be a carbon copy of the attraction that opened earlier this year in Anaheim? 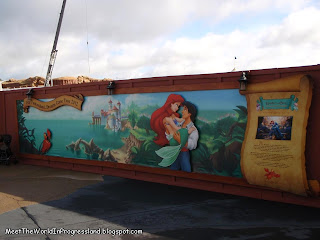 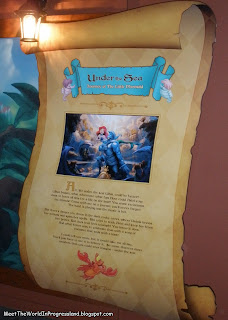 Over near the Dumbo attraction was artwork depicting the Seven Dwarfs Mine Train rollercoaster. There was an area specifically designated for stroller parking near Dumbo, but of course there are going to be rebels that have to park elsewhere and block my perfect shot of the Snow White artwork. Don't they know there are people out there that want an uncluttered view of this stuff? 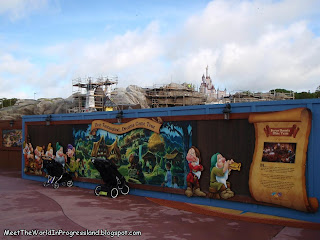 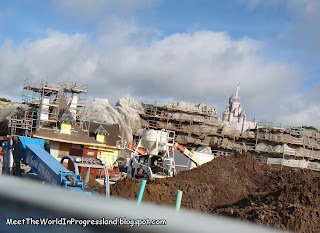 ....that is, until the strollers began to roll out from under me. Hey, don't those things come with brakes? 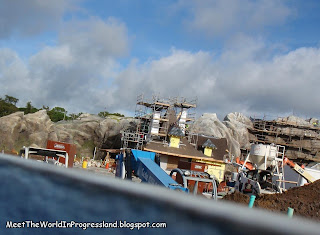 Let's take a closer look at the description and artwork for the Seven Dwarfs Mine Train ride. 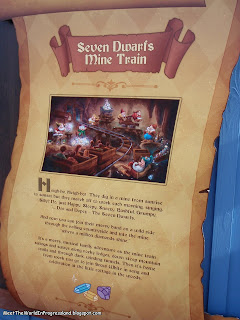 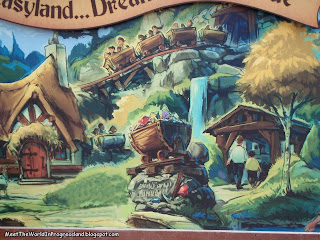 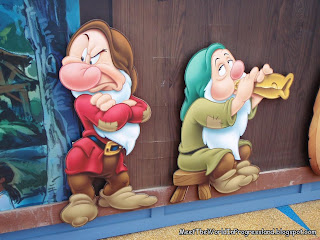 Further down, near Pinocchio's Village Haus Restaurant was a description of the "Enchanted Tales With Belle" attraction. 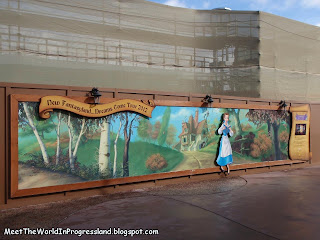 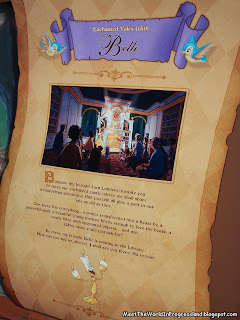 Here's an overview of the New Fantasyland. In the upper right corner, we can see the Storybook Circus section of the area. This was the previous location of Mickey's Toontown Fair, formerly Mickey's Starland....and formerly Mickey's Birthdayland which opened in 1988 to celebrate Mickey's 60th birthday and was intended to be "temporary," but remained for over 20 years. Originally this area was going to be used for a "Pixie Hollow" section in the New Fantasyland, but the plans were eventually revised and will now include a "double" Dumbo's Flying Elephants attraction with an interactive queue. 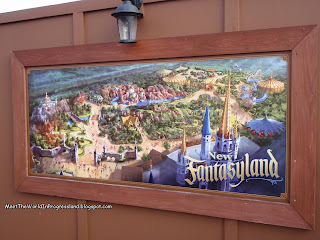 This construction wall and artwork can be viewed while riding the train around the park. A child's hand can be seen pointing at the artwork. I believe I overheard the child saying, "Well, a Storybook Circus section wouldn't be my first choice for the New Fantasyland but at least it's better than something totally lame like Pixie Hollow." 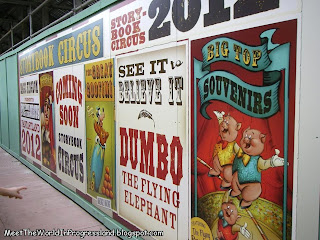 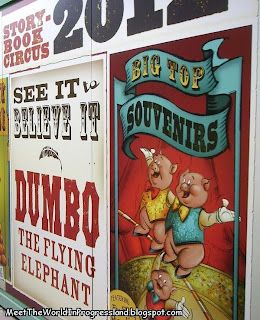 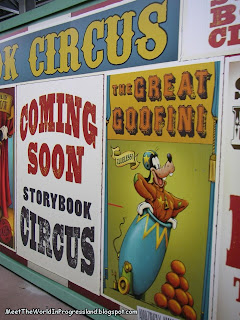 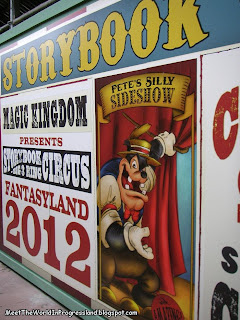 And last up we have a couple shots of the Storybook Circus construction. The first one shows what I believe was part of Goofy's Barnstormer junior coaster, which is going to be re-purposed into the "Great Goofini" coaster. 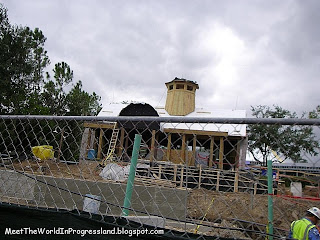 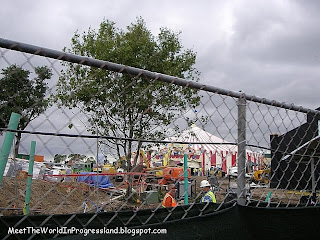 Oh, and no strollers were harmed in the taking of these photographs. I never even touched the two strollers that were parked in front of that construction wall. And don't get me wrong, I don't dislike children.....I just think they should be forced to walk around the park and when they get tired of walking, then it's time to go home. (Please don't leave me hate mail in the comment section! Thank you!)

Hey, those animatronic construction workers in that last photo look mighty real to me!

Glad you shot those pics over the wall. Fantasyland needs a little more rebel-like behavior since SWSA is going away.

SWS, Very lifelike aren't they? I am still bothered by the fact that Snow White's Scary Adventures is being removed.....and for what? A Princess Meet 'N Greet! Sheeeesh! I took a lot of pictures of SWSA and will eventually post them. I think Orlando has THE best SW attraction of all the parks....even better than Tokyo Disneyland!

I agree with you about Snow White's Scary Adventures. It's a shame that it is closing.

One thing that just changed is the Enchanted Grove getting renamed to Cheshire Cafe. Too bad Florida isn't getting more Wonderland stuff.

Florida's submarine attraction was SO cool, it is tragedy that it was torn out! The "Be Our Guest" restaurant may be neat, but I just can't get too excited about a restaurant. Is the "Beast's Castle" that you mention going to be part of the restaurant, or will there be more "Beauty and the Beast" stuff to see?

I believe that the inside of the Florida "Mermaid" attraction will be identical, but it will have a much more elaborate entrance (obviously!). The 7 Dwarfs Mine Train thing looks fun, but I still hate that they are tearing out the old "Snow White" ride for - - a princess meet 'n greet! Damn those princesses.

I kind of like the theme of the Storybook Circus - there are no pixies or princesses, at least!

Dan, Thanks! The Enchanted Grove was under tarps while I was there. It would be nice if they could have done more of an "Alice" area. I still think they should leave Snow White's Scary Adventures alone and have the Seven Dwarfs mine ride across the way which would create sort of a "Snow White area" but I guess that would make too much sense!

Major, in addition to the restaruant, there will be the "storytelling" attraction with Belle. I'm guessing here, but I think the restaurant will be underneath the actual castle since it is a miniature/forced perspective type of structure up there on the rocks. I agree...it's hard to get excited over the restaurant OR the storyteller attraction. I just wish the Little Mermaid ride was going to be something completely original for Florida, like maybe a Beauty and the Beast dark ride. But again, that would make too much sense....and cost them more money than just replicating what has already been done in Califronia. :-(

Storytelling attraction with Belle... I assume this just means that kids can sit and listen to a castmember dressed as Belle reading a story (her adventures with The Beast)? I hope I'm wrong. A) It would be strictly for small children. B) It is cheap C) I enjoy donuts.