This isn't really a full-fledged "Vintage Disneyland Trip Report" due to the fact that I don't have any photos from this particular visit, but this Disneyland entertainment guide is from a family trip to the park in August of 1973.....38 years ago this week. 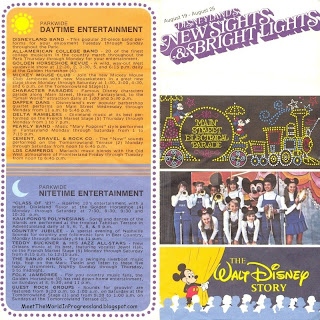 "New" Mousketeers in 1973, huh? I've never heard of this group of kids. I wonder if this stage show is what sparked the idea for "The New Mickey Mouse Club" television series four years later? And this was also the year that The Walt Disney Story debuted in the Opera House, replacing (temporarily) Great Moments With Mr. Lincoln. 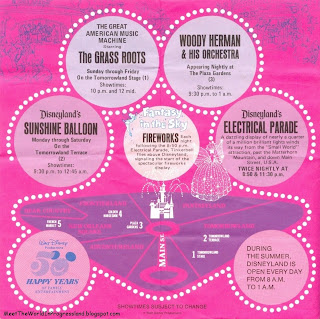 This separate insert was included with the entertainment guide.

It's strange....I do remember at least two photos being taken during this trip, but I haven't seen them in over 30 years. I've asked my dad to look through his photos just in case he has them, but he has given me most of the family photographs and slides, so it's possible that they may be lost forever. What are the photos that I'm remembering being taken during this Disneyland trip from 38 years ago? Well, I know one was of my grandmother and me in a Matterhorn bobsled splashing down at the end of the ride. This was the very first time I ever rode the Matterhorn, so I would really like to see that photo again! The other was a photo of my grandmother and me in a caterpillar vehicle that was winding it's way down the leaf of the Alice in Wonderland attraction.....and I want to see that one again too! Oh well, I think I have every other picture that my dad ever took at Disneyland, so I will just be thankful for that!

Here are some things that I remember about this trip: I remember eating spaghetti on the patio of the Plaza Pavilion while watching the Electrical Parade pass by. This was the first time that I had seen the parade and it was also my first time seeing Tinkerbell and the Fantasy In The Sky Fireworks show. This was also the latest that I had ever stayed at the park.....I remember riding the Submarines around midnight thinking, "Gee, I'm tired and I just want to go home." Can you imagine?

Other memories include my grandmother buying my brother a raccoon skin hat at the Indian Trading Post in Bear Country (now the Briar Patch Store) and buying me this incredible souvenir book at The Character Shop in Tomorrowland (now Mickey's Star Trader). 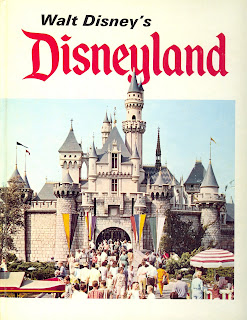 Here are just some of the contents of this book. 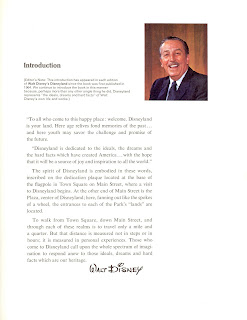 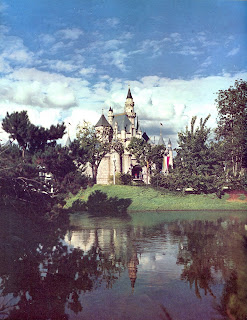 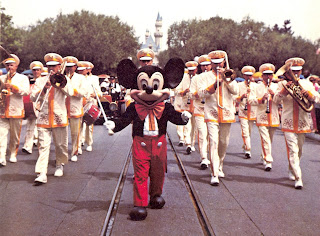 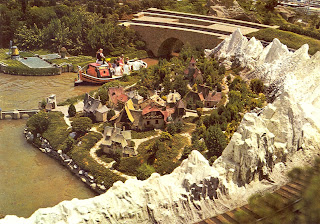 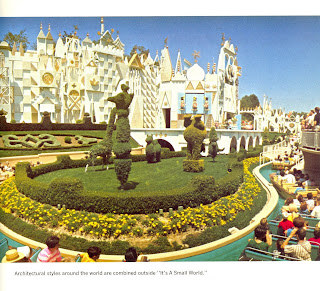 In this next picture, notice the Spaceman and Spacewoman (wearing a mini-skirt!) posing for pictures in front of the coolest Tomorrowland of them all! There is also a hidden Mickey in the photo. It's the Mickey Mouse costumed character and he's riding on the PeopleMover. Hint: He's riding in one of the blue cars. 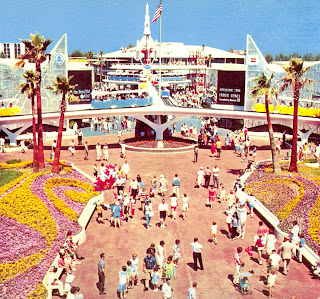 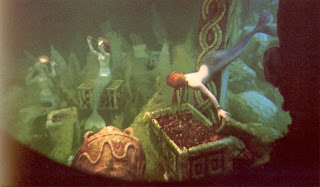 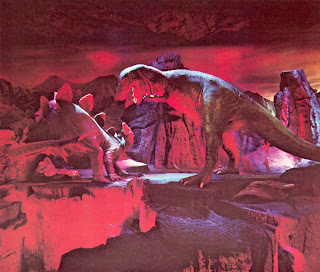 Some of these photos were a little outdated for the time. Can you find three things in the photo below, that would have been out of place for 1973? Answer: If you look closely, you can see the tip of the old Moonliner Rocket in Tomorrowland and the steel framework being erected for the Matterhorn. Also, the canoes and their cast members still have an "Indian War Canoes" theme going on. 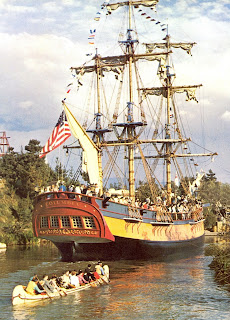 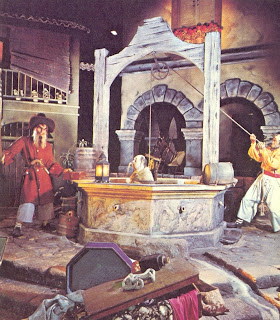 Here's something interesting! As I mentioned before, the Walt Disney Story was new and had replaced Lincoln. This particular page has an insert that was pasted into the book with info about The Walt Disney Story as well as an announcement about a future attraction.....The Hall of Presidents! I do remember seeing the Hall of Presidents listed as a future attraction in the old "Disneyland Presents Previews of Coming Attractions" exhibit on Main Street and if I'm recalling correctly, I believe there was a map on the wall showing it in a "Liberty Square" area off of Main St. I just can't remember if it showed the new area being located off of Center St. or if it showed it being located off of Town Square as it was originally planned back in the 50's (then called Liberty Street). Maybe someone out there can tell us more about the 1970's plan for The Hall of Presidents at Disneyland? 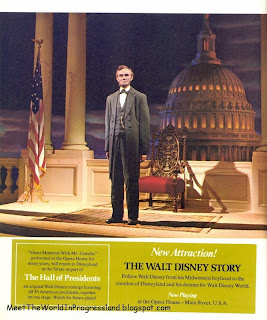 Five years later, when I went to Disneyland during an eighth grade graduation trip, I bought an updated version of this book. Most of the photos remained the same, but there were a few updates at that time. To see some more photos that I've already posted from the updated version of this book, click here: Eighth Grade Graduation Trip.
Posted by TokyoMagic! at 2:01 PM

I think your "pasted insert" regarding the Walt Disney Story and the FUTURE Hall of Presidents is probably pretty rare. That Disneyland Preview of Upcoming attractions had a major impact on my like--also some of my most vivid memories of Disneyland as a kid. There was an exhibit there prior to the Space Mountain exhibit that showed some plans for Disneyland.....including Thunder Mesa Runaway Railway, Western River Expedition, and Hall Of Presidents in a Liberty Square. There have been a few Liberty Square proposals at Disneyland in the 1970's and 80's. The 1970's version includes a Hall of Presidents all located between Tomorrowland and main Street included LIBERTY TAVERN, CHERRY & APPLE PIE BAKERY, THE FRANKLIN GAZETTE, PEWTER & SILVERMITH SHOP and a "SHADDED COLONIAL GAZEBO" A April 1981 revision for Disneyland's Liberty Square shows WED torn between Hall of Presidents or American Adventure--L1981 Liberty Square's location was still be considered and WED suggests " Land behind Lincoln Theater" '40 acres northeast of Disneyland" "Behind New Orleans Square, between Haunted mansion and Pirates of the Caribbean" Even in the late 90's there was a plaque and photo regarding Walt's Dream to bring the Hall of Presidents to Disneyland.....and one day Walt's dream just might come true!

Thanks for that info, Mike! I would love to see them bring The Hall of Presidents to DL, but something tells me they would never spend money on an attraction like that now. :-(

If only I could have seen the Cement, Gravel & Rock Co.! Meanwhile, I'm thinking back to watching the Electric Parade (followed by fireworks), and getting a nostalgia rush. Bummer that the photos of you and your grandma have been lost; maybe they'll still turn up someday. And it took me longer to find the Spaceman and Spacegal than I'd like to admit.... I was never good at "Where's Waldo". Could that steel framework be for Cascade Peak? (Not sure, just wondering). And the Hall of Presidents thing is really interesting!

Major, as a kid, I always thought that photo was showing the framework for Cascade Peak....but then when I got the book out recently to scan it, I noticed that the Columbia is approaching the dock, so the boat would have already passed Cascade Peak which should now be located behind it (and out of the frame of the picture), right? I have to admit though, that structure does look like it's located a little too far north of the Castle for it to be the Matterhorn. What else could it be?

Okay, I just checked out a "satellite view" of DL on Google Maps and it appears that if we were standing in the spot where this photo was taken, the tip of the Matterhorn would be behind the Castle (by the way, the Castle can just barely be seen below the American flag...it shows up better in the original photo than it does in this scan).

That tomorrowland picture is awesome!

I cried because I was wrong, then I laughed because it's still a cool picture, then I ate some pancakes and took a nap.

Very cool. If you wouldn't have mentioned the blue cars, I would probably taken forever to find the Hidden Mickey.

The mermaid image is cool too.

I got back from my 4 day/6 theme park Orlando trip on Monday. My first day there, I got to see Disneyland's updated (shortened for Florida) Electrical Parade. The Circus segment was missing. It was nice to see the Pinocchio/Pleasure Island floats. They were never in Florida before, were they? It was kind of funny to hear younger people asking who Elliott from Pete's Dragon was ("is that Puff? Mushu?").

Donnie and SWS, I'm glad you liked the pics!

Major, Sorry if I made you cry. I hope the pancakes were in the shape of Mickey.

Dan, I kind of thought you might be in Orlando, because I remember you saying that you were going in August. Can't wait to hear your trip report(s)! I'm not sure if the Pinocchio unit was ever at Florida. I never saw the MSEP at WDW....only Spectro Magic. I love the MSEP, but my biggest complaint is that they didn't update it. The newest addition to the parade was Elliot from 1977 (I'm not counting temporary additions such as the Fox and the Hound units). All those years went by and then in 1996 they decided to get rid of it for a hideous thing like Light Magic? They should have just updated it instead like Tokyo Disneyland has done and continues to do with their MSEP. Then when Anaheim finally added something new to the parade last summer, which was the Tinkerbell unit, they replace the Blue Fairy with her! Who's making these decisions. Oh boy....you got me started!

In 1972 Disney formed the New Mouseketeers and they performed on the Tomorrowland stage in the Disneyland park.
12 fortunate kids were hired on out of 2000 that auditioned.
The summer of 1973 Disney decided to incorporate a mousekeband for the club.
https://www.facebook.com/NewMouseketeers

I have a picture of Cement, Gravel and Rock from a Disneyland appearance in 1973. I don't think I can post it here but can send it to anyone that asks.

Hey texascom, would love to see that pic of the band.

texas.com, thank you for posting the link to your photos (and thanks MoonMonkey for asking him to!). Those are all great shots! I love how the giant "GE" signs on top of the Carousel of Progress building can be seen in the one pic.

I'm sorry that I didn't respond to your original comment from April 5, 2020. I'm not sure why, but I'm guessing it's because it was at the very beginning of the pandemic, and the "shutdown."

Thanks again, for sharing your photos of the band!

I don't remember much about the show but I do recall Disney required all their acts to be very clean cut (as in short hair) and the band played covers of popular songs of the day and they were a very tight and energetic band. I'm a bit surprised there is nothing about them on the internet and no videos.

Are you aware they were used as artwork accompanying a mixtape by Scottish electronic music duo Boards of Canada? https://bocpages.org/wiki/Societas_x_Tape