Well, it's the 27th of May....and exactly 34 years ago today, Space Mountain officially opened at Disneyland. Last year I posted a couple newspaper articles about the opening, as well as my story about the very first time that I rode Space Mountain. To see that post, click here. Below, are a couple more vintage newspaper clippings. Once again, I have saved these since childhood. 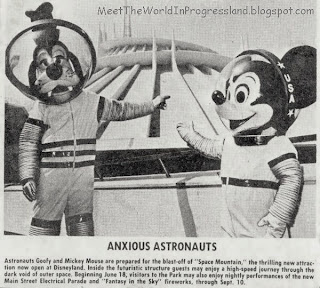 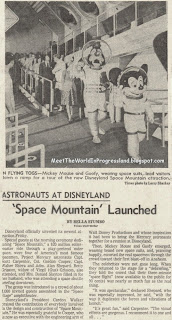 Also on the 27th of May, but one year later (1978), The New Matterhorn opened at Disneyland. Here's an ad from the L.A. Times dated just one day after the official opening. This particular version of the New Matterhorn advertisement used red ink for the Abominable Snowman's eye's. It was much rarer to see colored ink used in newspapers back then....the exception of course, would have been the Sunday Comics section. I wonder how much more Disney had to pay to have the red added? 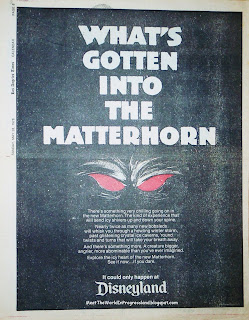 On the reverse side of this ad, there happens to be an advertisement for Knott's Berry Farm's Montezooma's Revenge, which opened that same year. 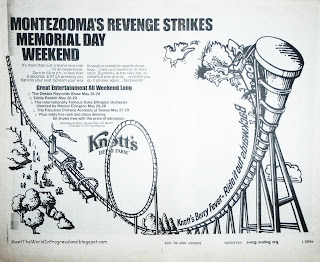 Happy Memorial Day Weekend, everyone! Be safe!
Posted by TokyoMagic! at 1:50 AM

I totally remember those newspaper ads for the new Matterhorn, and thought the yeti was way cool when I rode it for the first time. The crystal caverns thing I always thought was pretty lame.

The Matterhorn ad is indeed way cool. That was no inexpensive advertisement. Glad you had the foresight to save it along with the newspaper clippings.

Also liked the clippings and park entertainment guide from your post a year ago.

Matt, I also remember being impressed with the Abominable Snowman. I agree with you about the crystal ice caverns thing being kind of lame....also the snow storm effect! I remember they hyped it all up so our expectations were pretty high....as they do with most new things at the park. In all fairness, the caverns weren't as bad when they had the fog in them. Whatever happened to that effect?

SWS, Glad you enjoyed both posts. I figured that the colored ink had to have been pretty expensive for them back then. I do have some even larger versions of that ad with the red ink and also some smaller versions without it.

Glad you saved these ads, TokyoMagic!

The Abominable Snowman would have freaked me out as a little kid (especially if I had seen that ad). I was in high school when I first experienced the Matterhorn, and even then that loud roar was intimidating. As simple as Matterhorn Yeti is, at least he's more reliable than his Florida cousin (I have yet to see him in action...).

Dan, I've only seen DAK's Yeti moving, but I've heard about it being broken for some time now. Very sad!

Whoa, how did I fall so far behind?? I definitely remember that Abominable Snowman ad (was it also used in "Disney News" magazines?). I liked the crystal ice caverns, but originally imagined something a bit more extensive, sort of like a Rainbow Caverns thing.

Sorry Major...I'm late responding to your comment and I don't know if you'll see it, but I don't believe that exact ad or graphic was used in Disney News Magazine. It was used for the cover of an issue of the Disneyland Line and I believe Vintage DL Tickets posted that on his blog a while back.

I really enjoy this article Flyweek.pl