Here are some items that I picked up during my recent trip to Japan. These Small World dolls were being sold in the Disney Gallery at Tokyo Disneyland. 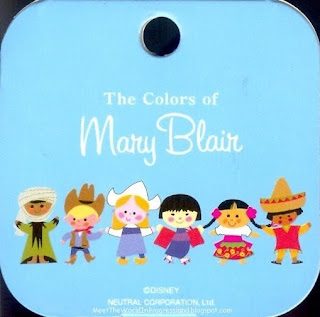 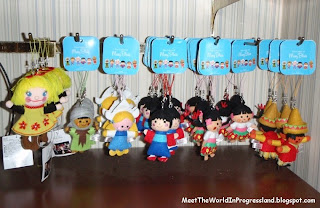 The doll's tag has a photo of Walt Disney and Mary Blair posing with her doll. I believe the person that is cut off on the far left is Marc Davis. 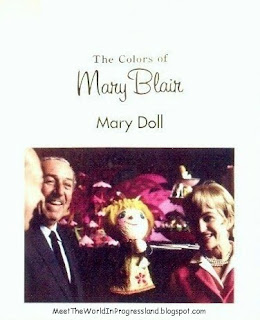 And now, another thirty year old newspaper ad from The Los Angeles Times. Thirty years ago today, Disneyland (which happens to be YOUR land) was celebrating Small World Days. I wonder what the free poster looked like? And look, you didn't have to give up an "E" ticket to ride It's A Small World, it was free that weekend. Free of course, with the price of admission. Without that disclaimer in the ad, I wonder how many people would've shown up at the gate and said "Let me in the park to ride Small World.....you said it's free!" 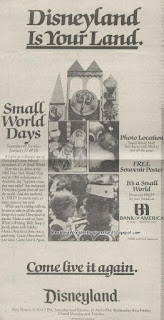 POST UPDATE - January 31, 2011: Here's a photo that I took just yesterday, showing Mary Blair's doll inside the attraction. She can be seen standing on the Eiffel Tower and holding a red balloon. 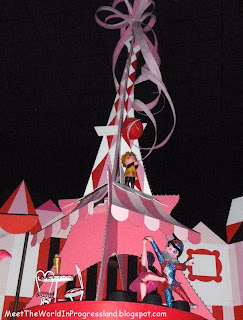 Those little dolls look rather cool. It appears they might be designed to work as key chains?

I'm a big fan of most things Disney, but obviously Snow White garners most of my attention. So I had no idea that there was a Mary Blair figure actually within the Small World ride.

I did a quick google search and found a pic of the doll here: http://findingmickey.squarespace.com/disneyland-facts/fantasyland/5442623>

Go Mary Blair! Loved the work she did.

Hey SWS, Thank you for the link! I tried to search for a photo of the Mary Blair doll inside the attraction, but obviously I didn't try hard enough!

Those dolls are what they call "danglers." There is a cord/loop attached to the doll with a very tiny metal clasp (too small to hold keys). The cord/loop can be removed and then looped around a purse strap, zipper pull, etc. and then the doll can be reattached to it. They make smaller "charm sized" items like this as well. This type of souvenir is very popular at TDL.

Those dolls are so cute. Isn't it so satisfying to buy collectible Disney items, right? My daughter is an avid fan of vinylmation (is that the right term) item collectibles from Disney especially the Mickey figures have you tried checking out those?

I'm another person who didn't know about the Mary Blair doll in IASW. A nice tribute to such an important person in Disneyland history...

Yes, that is definitely Marc Davis in that photo!

I take that back! Once I saw the photos that Mr. Snow White Sanctum linked to, a lightbulb turned on in my tiny brain and it turned out that I had seen it before!

Tokyo-- Sorry for veering off on a tangent here, but you own the Kellogg's talking Magic Mirror??? That ROCKS! I've looked everywhere for an image, but came up with nothing.

How does it work and what does it say?

Is it be possible for you to email me (via my profile) a pic or scan to post? I would of course give you full credit and a link back to your blog.

Now back to your regularly scheduled programming. Go Mary Blair!

Wow, I did not know about the Mary Blair doll. Nice souvenirs and ad!

"Hey ticket taker, I've got a paper right here that says Disneyland is MY land. It says so in black and white!"

After doing some research about her work, we became huge Mary Blair fans. We also thought the IASW doll was nice touch.

Would have loved to go to Japan to pick up some Mary Blair merchandise. When we visited the Walt Disney Family Museum last June, the gift shop had some pricey Mary Blair items on consignment from a Japanese museum.

For more Mary Blair - We found that The Providence Saint Joseph Medical Center in Burbank has original Mary Blair artwork in the Nursery and Labor & Delivery wards.

Great to meet some Disney/MaryBlair fans.

Finding Mickey, I've heard about the artwork at the St. Joseph Medical Center. Can anyone go and view it in the Nursery and Delivery wards?

We heard they had tours, but they may only be for prospective parents wanting to deliver there. We've wanted to visit, to snap our own photos, but it might not be the safest thing for random people to wander around a Labor & Delivery ward.

btw - There were several photos of Mary Blair's art and some Dumbo Stork drawings on Flickr and StartedByAMouse. Some of Blair's pieces look like It's a SmallWorld concept art.

Thanks FM, for replying. I was thinking the exact same thing. Too bad her work isn't in one of the other wards.

I have a boxed set of postcards that I bought at TDL that have Mary Blair concept art for Alice In Wonderland. I need to post those!

oh, we've been trying to snag a copy of her Alice in Wonderland golden book. same art? looking forward to seeing them posted.

I haven't seen the Mary Blair Golden Books, but someone was recently telling me about them. I'm guessing it's the same artwork, but not sure.

How can I purchase a few if the clothe keychains?

Hi Sherry, I bought mine at Tokyo Disneyland, back in 2010, so I'm not sure if they would still be available to buy "new." I just checked ebay, and there doesn't appear to be any listed for sale. If I were you, I would just keep checking ebay, because something like this could always "pop up" for sale, at any time. Good luck!