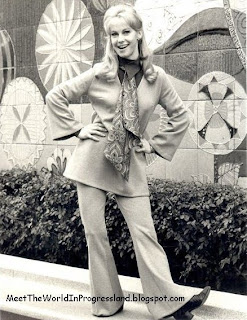 Did I hear somebody out there ask, "Who's E.J. Peaker?" Well, do you remember seeing "Hello Dolly?" Do you remember Miss Molly's Dress Shop? Remember Minnie Fay, the assistant? Well, that was E.J. Peaker....THE MOVIE STAR! Here we see her standing in front of the large Mary Blair mural that was in Tomorrowland from 1967 to 1987. This was a publicity shot for "The Wonderful World of Disney" episode entitled, "Disneyland Showtime."

This show originally aired in March of 1970 and would sometimes show up in later years on "Vault Disney" on the Disney Channel. The episode can be watched here on YouTube.

Here's a better shot of the mural....it also shows which part of the mural she's standing in front of in the publicity photo above. 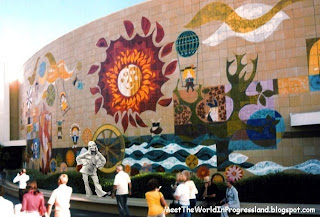 .
Here's another shot, taken from the other direction. 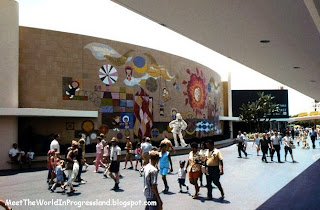 There's a kind of walk you walk, when the world's undone you. There's a kind of walk you walk when the neighbors shun you. Just watch the show and you'll understand....she's simply too groovy for words.
.
Oh yeah, the episode also shows her singing on The Tomorrowland Stage and The Mark Twain Steamboat. You'll also see the Kids of the Kingdom sing, "This Land Is Your Land" while riding extinct attractions like the Skyway, the Pack Mules, Nature's Wonderland Mine Train, and the Keelboats. At the end of the show, everyone rides through the then newly opened Haunted Mansion, which makes E.J. feel kind of "creepy all over!"
Posted by TokyoMagic! at 1:25 AM

Amazing post - great details and WOW the Youtube links are so fun to watch - I'm about 1/2 though now but I gotta go to work, darn! But E.J. will be waiting for me when I get home :-)

Thanks for the cool post and great pics, I miss the murals so much!

Thanks, VDT! Yep, she'll still be there waiting for you when you get home....and her "thought bubble" will be saying, "Let it please be him.....oh dear god, it must be him, it must be him, or I shall die!" How dramatic, huh? Can you tell that I kind of like her?

I actually taped most of that Disneyland special when it was on the Disney Channel many years ago. Sadly, the tape no longer has sound, but I also no longer have a working VCR.

I loved this special, and it was so fun seeing teenage Kurt Russell, E.J. and the Osmonds visiting vintage Disneyland.

The best part about this special for me was the Haunted Mansion segment. I was happy to get the great Haunted Mansion CD, which includes "Otherworldly Music", which is heard during this show when the gang travels through the ballroom sequence on the attraction.

Hi Dan. I had taped this off of the Disney Channel too. I love EVERYTHING about this special...The Osmonds, Kurt Russell, E.J. Peaker, The Kids of the Kingdom and of course the Vintage DL footage! Kurt Russell singing "Sugar, Sugar" is a hoot too!

I really expected this episode to show up on one of those Disneyland DVD's... I sure would love a high-quality version!

Hey Major, I was hoping this would would be included in one of the "Disney Tin" DVDs too. Maybe someday.

So now that I've watched the whole thing again, and watched the "Kids of the Kingdom" sequence three times in a row, this is what I've discovered;

This would be too cool on DVD or Blu-ray. "from the old time Keel Boats... this land was made for you and me....."

"....to the Tiki Tea House, this land was made for you and me." I want to be one of the Kids of The Kingdom too. Being a member of Sound Castle would be okay also. Did you notice that the band members all had mustaches...and in the 1970's Disneyland!

So you didn't want to be the annoying Mr. Gridley, huh?

So dramatic, but I love it! We were short-changed by only getting to hear her sing two songs during that show.

I liked it when E.J. Peaker played Natalie Schafer/Mrs. Howell in the 2001 made-for-television Giligan's Island movie...now available on DVD! E.J., YOU ROCK!

I love you, E.J.! They should film a new TV special at DL with you and the Osmonds!

NBC wasn't really pushing Kurt or the Osmonds were they? They must've been too excited to have such a big MOVIE STAR in it! Too bad, the Osmonds' outfits are worth it alone. :-D

BIWATW, I agree about the Osmonds outfits.....their day-wear AND the polyester suits they wear while performing on the Tomorrowland Stage. I also LOVE the outfits worn by Sound Castle......SUGAR, SUGAR!!!